Aaron Rome was suspended for 4 games for his hit on Nathan Horton in Game 3. The suspension effectively ends the Stanley Cup Finals for him. Horton, it was announced, will also be out for the remainder of the series with a severe concussion.

The NHL wants to get serious about hits like this one, which is why they devised Rule 48. They wanted to eliminate the grey areas that in the past muddled the debate between what was dirty and what was clean. But as grey matter injuries mount, grey areas needed to be clarified. Hence Rule 48:

"A lateral or blind side hit to an opponent where the head is targeted and/or the principal point of contact is not permitted."

Some might argue that Horton should have made himself aware of Rome's presence. But the fact that Rome was so far from him, and that the puck was gone for so long, Horton probably assumed Rome wouldn't interfere with him. Perhaps not the wisest of assumptions, because you never know what'll happen on the ice, but this is hardly a blame-the-victim scenario.

And while the suspension satisfies me, there's no justice, no revenge possible. Horton is out. No disciplinary action can change that. He'd scored 8 goals with 9 assists in the postseason. He got the game-winning goal in two Game 7s. And he's gone. And who knows what the long term affects on his career will be. 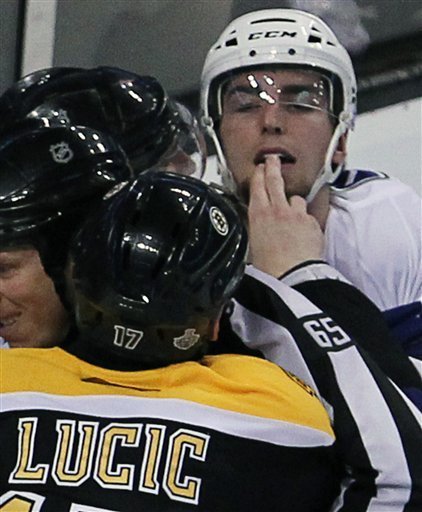 Maybe it was Burrows' biting incident, maybe it was the late hit on Horton, maybe it was something else. Whatever it was, the Bruins brought a fire to Game 3. That fire produced 8 goals, it dominated the game, and it was one of the most convincing performances the Bruins have mounted in these playoffs.

This game was decided in the 2nd period. The B's scored a PP goal, and a shorthanded goal, along with a pair of even-strength goals, and the game was all but over. They kept pouring it on in the 3rd, and maybe they got into Luongo's head just a bit. He can be kind of a flake.

Seven different goal scorers for the Bruins. And they sent a message. Not only on the scoreboard, but in the scrum. All of the Canucks' joking over Burrows' biting incident came back and, well, bit them.

And the Bruins did it cleanly. Shawn Thornton got a 10 minute misconduct for who knows what, but the rest of the Bruins played within the rules. Maybe Lucic leveled a post-whistle punch on Burrows. But that was well overdue. The dirtiest hit of the game was issued by Aaron Rome on Nathan Horton.

The Versus people blaming Horton pissed me off. Rome was so far away from him that Horton probably assumed that he was safe from any hit. The puck was gone. It's a shame. We'll see what the NHL decides to do with Rome. Unlike Burrows' shenanigans, this has resulted in a series-changing injury. But who knows what the NHL will say.

And how about Tim Thomas? 40 Saves last night. So many big stops that prevent Vancouver from mounting any sort of comeback.