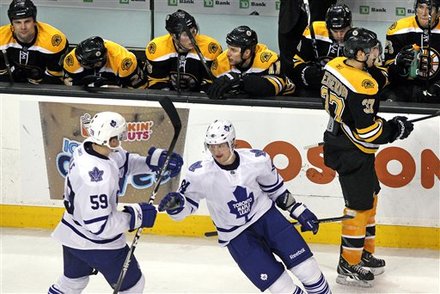 What happened to the defensively minded Bruins? You know, that team that struggled to score goals, but were at the top of the NHL in goals allowed and penalty killing? I miss those guys.

And that's just the first problem this team's been having. They don't care for the puck. Last night, they tried so many low-percentage passes, trying to sneak it past Toronto's players, as if they didn't realize they were playing against another team.

The defensemen haven't been playing their best. We saw Grabovski score the game-winner when he was by himself against both Seidenberg and Ference. How does that happen? Chara helped Toronto score earlier when he tripped Tim Thomas. Missed assignments, lack of communication, lack of physicality, these problems have plagued the blue-liners for about a week now.

Either Fraud Julien isn't the defensive genius we once thought he was, or his soldiers have stopped listening.

And the power play unit, which scored another breakaway goal, needs to adjust its philosophy once they've entered the offensive zone. As it is, Chara and Recchi camp out on the blue-line, Krejci by the halfwall, Lucic and someone else in the slot. Then they hover in their little territories. There's no movement, no bodies cycling around, causing disruption and confusion, or at least getting open for a pass. On a power play, Zdeno Chara should not be moving around more than the forwards.

Then there's guys like Blake Wheeler. What does he contribute?

Then there's guys like Daniel Paille. He does his job as a role-player, but the ratio of role-player to playmaker on this team is way off balance.

Maybe Lucic-Bergeron-Marchand for a top line? Recchi-Krejci-Ryder for the 2nd? Wheeler-Seguin-Horton on the slump line. Thinking about this, should the Bruins get a puck moving defensemen with forwards like these? To me, if they can't get a decent enough forward to supplement this group, then they should keep Toronto's pick and hope to build for 2011-12. Because one more defenseman won't turn David Krejci into a 30 goal scorer, nor will it give Blake Wheeler a purpose.