Sunday night Bill Belichick made a coaching decision that confounded the crowd at Gillette Stadium and puzzled even his own players. By kicking to start overtime, Belichick went against conventional strategy. He took a chance by taking the wind. It worked out. And like all coaching decisions, it worked out because the players did their job once the coach made the call.

I would have elected to receive. But I get the logic behind Belichick's decision. And the more I think about it, the more I like it.

Let's say the wind had the following impacts on field goal attempts, based on what happened with warm-up kicks:

Into the wind, a 40 yard field goal would be considered ambitious but possible.

With the wind, a 55 yard field goal would be considered ambitious but possible.

The Patriots kicked off to the Broncos, almost assured of a touchback. So Manning and the Broncos would start at their 20, needing to move the ball 80 yards for a touchdown or 57 yards for a field goal.

If the Broncos kick a field goal, they need to drive 57 yards to have a reasonable chance, and then they'd kick off to the Patriots, who would probably get it at the 20, although with the wind they might get it with a shorter field. Let's just say the 20.

Down 3 and needing to match a field goal, starting from the 20 the Patriots would need to drive 42 yards to get within range. The Patriots had three 40+ yard drives during regulation, and seven drives of 30+. They'd also be able to use all 4 downs to move the ball.

If the Broncos try a field goal and miss, the Patriots might have an even shorter field to work with.

If the Broncos fail to get within field goal range and punt, then the Patriots are in fantastic shape. They have the wind, they have less distance to get to field goal range. Even if they fail to attempt a field goal, they're in position to give Denver poor field position, especially with the wind helping the Patriots punter (which is what happened).

The Patriots defense did its job in preventing Denver from scoring on the opening drive. But had they done even better, and held Denver to a 3 and out, and forced a 40 yard punt (long for a punter kicking into the wind) from the 20, then the Patriots would have gotten the ball back on their 40, only 22 yards from reasonable field goal range.

For this edge, Belichick risked a first possession touchdown, and the game ending with his best players touching the ball.

Even if you disagree with it, you must respect the the balls necessary to take the risk. Belichick has audacity. And many coaches that struggle to reach that next level of success often fail to do so because they play it too safe, they play prevent defenses, they hand the ball off to Knowshon Moreno when they're up 24-0.

There was logic behind Belichick's decision. We can debate the soundness of that logic all we want. What's not up for debate is that Belichick is fearless. He makes decisions and doesn't care what anyone thinks, doesn't worry about them failing. He's bold. He's daring.

That's one of his defining characteristics, and one of the reasons he's been so successful. 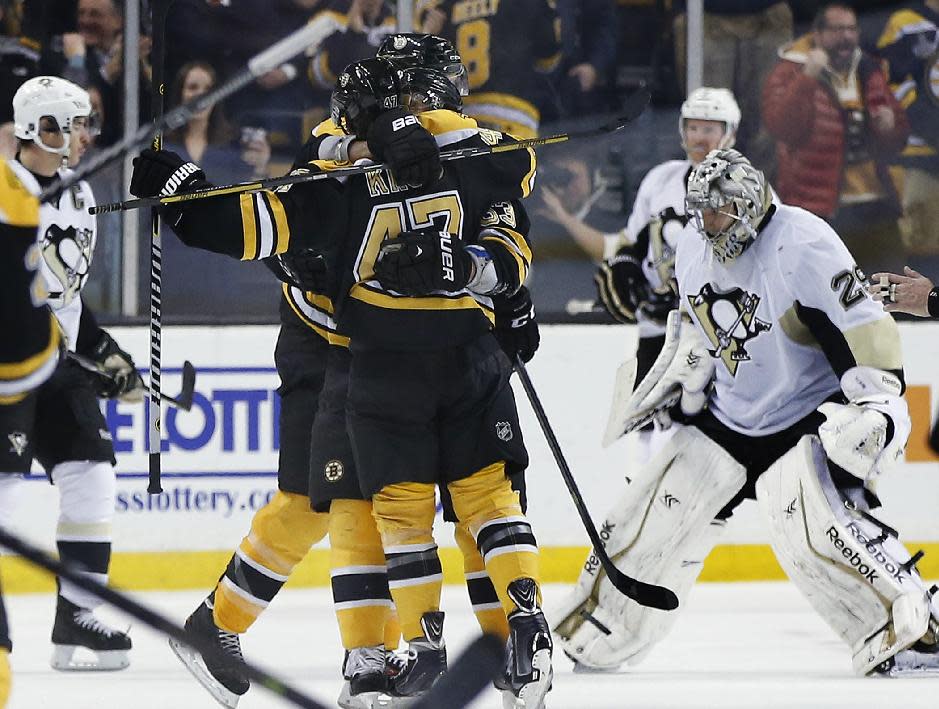 The night after the Patriots took almost an entire fifth quarter of football to beat the Broncos, the Bruins needed only 34 seconds of bonus hockey to beat the Pittsburgh Penguins 4-3.

What I liked most about this game was the diverse way the Bruins scored their 4 goals. Each goal was different. Loui Eriksson scored in transition, beating Marc-Andre Fleury straight-up. Reilly Smith scored a power play goal. In the 3rd, Zdeno Chara was credited with a goal as the puck deflected off Sidney Crosby's stick. However the goal was the result of a sustained Bruins possession in Pittsburgh's zone.

Finally, Torey Krug's overtime winner was a great example of cycling the puck and cycling position when playing 4-on-4. Krug started the play on the right point, then passed the puck as he switched sides to the left. This also drew Crosby (who had man coverage on Krug) to get a bit confused and out of position, focusing on the puck not the man. Once Krug got the puck back on the left point, he had half the ice to drive toward the net. He wound up and slapped the puck through Fleury and the game was over.

Krug's 7th goal of the season is good for second most on the team.

Chara finally scored his first even-strength goal. He and Krug have combined for 7 PP goals. The rest of the team has a total of 4 (2 from Hamilton, 1 each from Smith and Bergeron). Nine of the 11 Bruins power play goals have been scored by defensemen.

This game would have had more impact in the old divisional alignment, as the Bruins and Penguins would be vying for the top seed in the Eastern Conference, 3 points apart. Now it's not as meaningful. At least not to the standings.

The Bruins play the Red Wings in Detroit Wednesday night, then have U.S. Thanksgiving off, then host the Rangers on Black Friday. They have 3 games in 4 days then have 4 days off. The Penguins, Red Wings, and Rangers. Not a bad week of hockey.

Photo Credit:
Elise Amendola
Posted by rob at 10:00 AM No comments: