BRUINS TRADE STURM FOR NOTHING

The Bruins traded winger Marco Sturm to the LA Kings for "future considerations." Though Bruins' GM Peter Chiarelli described that to mean "nothing." In essence, the Bruins sent Sturm to LA for cap space.

As a Marco Sturm fan, I'm sad to see him go. There are several wingers on the Bruins I'd prefer to be traded for nothing (anyone named Blake, and anyone from Newfoundland). Although those guys will be gone via free agency in the off-season.

Sturm had four 20+ goal seasons with the Bruins, and was an adept power player. He was fast and disciplined enough to earn time in defensive situations, and on the penalty kill. I would've loved to see him play on a line with Seguin and Savard.

I don't like how the Bruins have spent their money on forwards. Ryder collects $4 million this year. But then there's guys like Paille and Caron, who each make $1.1 million. For what? And I'm losing my patience with Bergeron. He's an amazing defensive forward, but he's borderline useless on offense. Or at least useless as far as $4.8 million forwards go.

And I loathe the NHL salary cap. I understand and accept it as a necessity, to keep the likes of Edmonton and Ottawa in the hunt. But when teams that have no fans bring the average revenue of the League down, it brings the cap number down, and just ruins the game for fans in cities that have fan support. Atlanta and Phoenix, for example, have good teams this year, yet are 28th and 30th in attendance, respectively. Dallas lead their division, and are 26th in attendance.

These places don't want hockey, so why is the NHL so adamant that they get hockey? The NHL refuses to consider relocating teams to Winnipeg, Hamilton, or Quebec. And they don't even know what the word "contraction" means.

Before I lose my train of though, Sturm will be missed. He should do well in LA, where they need some help with forwards, and have some talent he can compliment. So Auf wiedersehen, Herr Sturm. Und viel Glück. 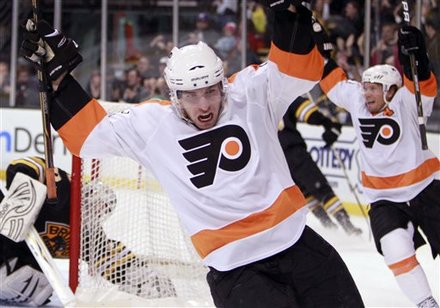 Mike Richards' OT goal ended what was one of the most entertaining hockey games you'll get this side of the postseason. I was glad to see the Bruins pick up their energy levels, compared to their display against the Islanders last week. Some things did bug the hell out of me, though.

Look, this team will struggle to score goals. I've come to terms with that and so should you. They'll flat-out miss open nets, they'll bobble passes, they'll air on shots. I'm fine with that. It's not fun, but these guys are who they are.

However, when struggling offensive players like Ryder and Wheeler continually make negative defensive plays, I feel like throwing up in my mouth. These two made some horrendous plays with the puck all night. In a few short seconds, Ryder turned the puck over twice in the neutral zone (Savard got it back for him so he could lose it again), which eventually led to Philadelphia's 1st goal. And if not for Thomas, Wheeler would have been responsible for more permanent damage, too.

Savard also played his part in both Philly goals. He got a bit too aggressive hunting the puck after Ryder lost it, which allowed a Philly 2-on-2 rush to turn into a 3-on-2, and a goal. Savard also made a no-look backpass to nobody, thinking Seidenberg had cycled over to his side of the ice. This led to Richards' rush, which turned into a 3-on-1, and a goal.

So the Bruins lost, but they did get a point from a high quality Philadelphia team. They showed some good fight, skated well, and for the most part played a good defensive game.

Oh, and how dirty are the Flyers?

They're not tough when they do stuff like that, they're cowardly. Turn your back and they hit you, legal or not. They play prison shower hockey. Thankfully, McQuaid returned to the game and seemed unhurt. 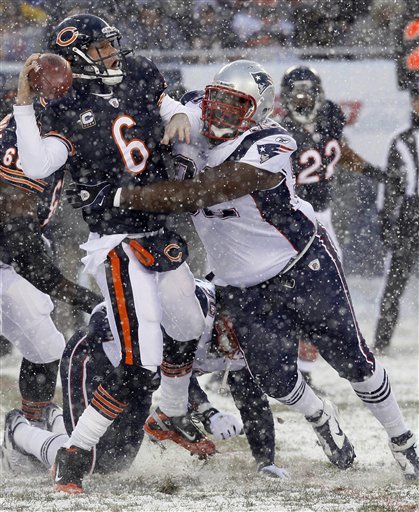 I was wrong about the Bears and the weather being something to worry about. The Patriots seemed to thrive in the snow, while the Bears wallowed in it. The Pats became the first team in the NFL to clinch a playoff berth, and took huge strides toward winning the AFC East.

Since halftime on Thanksgiving, the Patriots have outscored their opponents 116-17. That's simply staggering.

Last night, Brady had a few tipped passes that could have been intercepted, and a few field goals could have easily been touchdown drives. But I'm nit-picking. You just have to sit back and say that over the last 10 quarters, the Patriots have played amazing football. 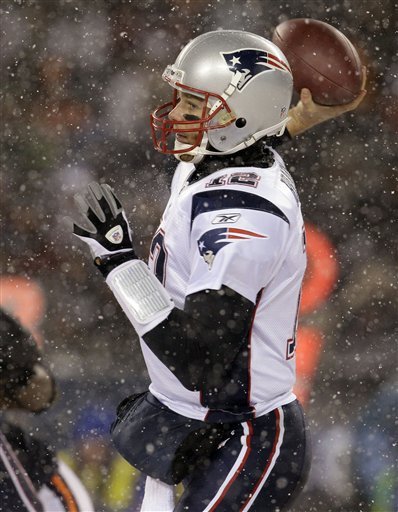 Brady threw for a season high 369 yards, in the snow, in the wind.

Wes Welker is back to 100%. We were all worried that without Moss, he'd struggle. His 8 receptions for 115 yards disputes that notion. He's caught 36 passes in the last 5 games, and is back to being a favorite target of Brady.

Branch is the other favorite target. He also had 8 catches, for 151 yards and a TD. He's caught 4 TD passes in the last 3 games. 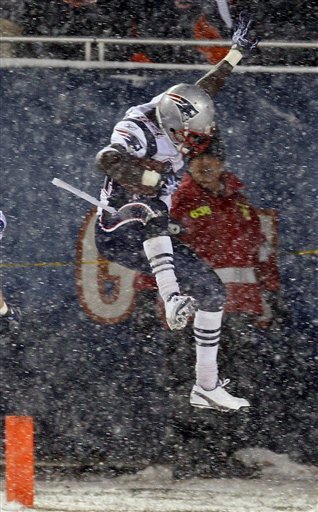 The most important thing the Patriots did last night was protect the football. 35 rushing carries, 27 receptions, 3 returns, and 0 fumbles. In weather like that, it's very impressive. BJG Ellis hasn't fumbled in his NFL career. Nor did he fumble in college. I can't find his high school stats, but I doubt he was a fumbling machine back in St. Augustine HS (New Orleans). 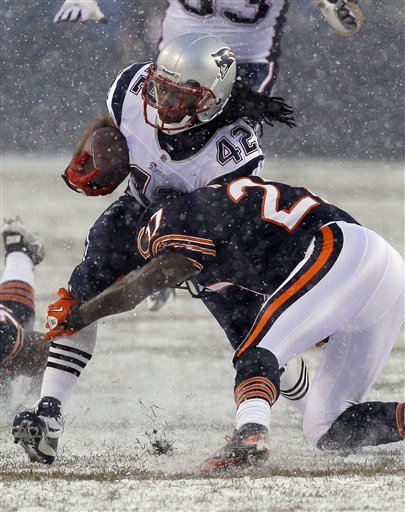 On defense, the Pats were all over the Bears. They held them to 185 total yards, and only 47 on the ground. They hauled in two picks, and recovered two fumbles. The Bears were only 3/8 on 3rd downs, so even when Chicago held onto the ball, they struggled to move it. The defense was a big reason why the Patriots dominated time of possession 39:41 to 20:19. That's essentially 2 to 1. 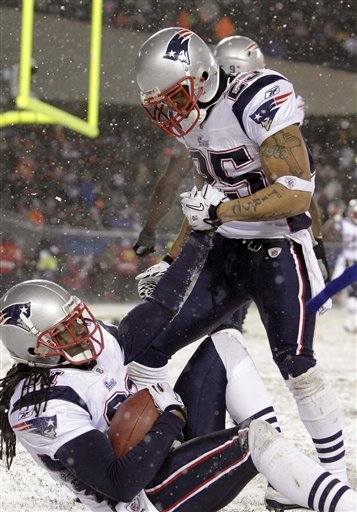 The Bears are fraudulent. The Patriots are currently the best team in the NFL. With the Jets getting "tripped up" by Miami, they now have a stranglehold on the division. They can clinch the AFC East, as well as a 1st round bye, with a win, and a Jet loss next week.

The Packers come to town on Sunday night, possibly without Aaron Rodgers. Though Green Bay does have the #1 scoring defense in the League, and the weather may once again be dicey.