I finally figured out why Tebow is such a big story. He was an underdog, who already had believers/fans before he started "beating the odds." So he has the appeal of an underdog, but already had legions of supporters. Which is abnormal. Most underdogs come from nowhere with no fans. Anyway, that's my short explanation of the Tebow phenomenon, at least the core of it.

To the actual game, which I know is a weird thing to talk about this week.

The Patriots saw what Tebow did the Steelers on Sunday. Rather, they saw what the Steelers' defense let Tebow do to them. They will not let that happen again. They're not going to give Tebow man coverage on deep routes. They're not going to bring safeties up to the line. They're going to give the Broncos 6-12 yard curls, as they've given to every team this year. And Tebow will hit some. He might even hit a few in a row. But it'll be tough for him to repeatedly move up and down the field with just these intermediate passes. He's not consistently accurate enough.

And while the Patriots' defense has allowed 4,703 passing yards (2nd worst), they've "only" allowed 26 passing touchdowns (10th worst). They don't allow many big passing plays. Their longest allowed was a 58 yarder. They keep the ball in front of them. The Pats' defense also improves in the Red Zone. The Broncos' offense actually got worse in the Red Zone last week.

Denver can run the ball well. And Tebow typically doesn't turn it over. So the Patriots have to pressure them to score, to keep up.

That's why the Patriots offense will determine this game. If they can protect Brady, if the receivers and tight-ends can get separation, and if Brady does his job, then the Patriots win. I'm not trying to sound arrogant, but this is a 13-3 team against an 8-8 team. A 13-3 team that beat the same 8-8 team on the road, and now they're at home. If the Pats execute, they win.

What will the Pats offense try to do? Hernandez had a great game back in Denver. Look for he, Branch, and occasionally Ochocinco to be cutting across the deeper parts of Denver's defense. And ideally, that will create space underneath for Welker, even some passes RBs. Denver's defense has a few talented pieces, and a few not so talented pieces. The Patriots will use their extensive arsenal of weapons to get the matchups they want.

Denver's only hope on defense is to pressure Brady.

So the Pats' keys to victory will be:

#2: Be yourselves on offense

#3: Prevent the big plays on defense

I think they'll do all these. It'll be a close game at first, with the Pats pulling away in the second half. Patriots 38, Broncos 24.
Posted by rob at 11:00 AM No comments:

I'd Forgotten How Much I Hate the Canadiens 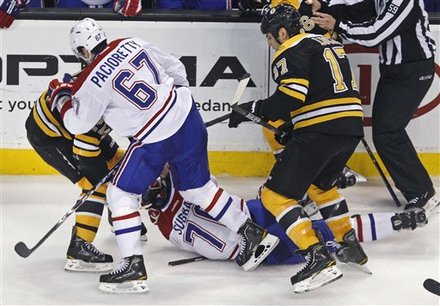 In the aftermath of the Canucks game, I'd forgotten how much I hate the Habs. I'd like to thank P.K. Subban for reminding me.

The Bruins didn't dominate this game. But still found a way to win. The heroes of the game included Tim Thomas, Milan Lucic, and a panel of the end boards behind Carey Price.

Thomas was insanely brilliant. He made so many tough saves at moments when Montreal was vigorously attacking the Bruins' goal. He also bailed out a few B's after they'd made mistakes with the puck.

The best athlete in the world named Tim does not have the last name Tebow. It's the goalie for the Bruins.

One thing the Bruins struggle with when playing Montreal is their speed. The Bruins seem to underestimate Montreal's ability to quickly close passing lanes. And that leads to deflected passes and turnovers. Thomas neutralized Montreal's edge in this area.

Lucic played a physical game all night long. And he wound up scoring the Bruins' only non-lucky-bounce goal. It came when Krejci was able to cycle the puck to Horton along the boards. Lucic was in the slot, being tokenly covered by Tomas Plekanec, and P.K. Subban was preoccupied with holding Krejci against the boards. Lucic scored a sweeping backhand goal and it was the difference in the game.

Subban was targeting Krejci all night. He finally crossed the line with an elbow to the head. I don't care if Subban gets suspended or not. I'm just glad Krejci is OK, and that Andrew Ference stood up for his teammate.

Subban's legs must be made of jelly, because as strong as he is, when someone nudges him his legs give out. He collapsed into a heap once Ference arrived, then looked like an O.W.S. protester being arrested, offering no resistance at all as Ference dragged his limp corpse around the ice. Then he cowered into the fetal position. He's pathetic. Montreal fans love him. Speaks volumes about their fanbase.

As a weird sidebar (sidebar from a Bruins' perspective, at least), the Canadiens traded Mike Cammalleri mid-game to Calgary. Cammalleri made some remarks 24 hours earlier about the team not having a winning attitude. I don't know if he was traded for those remarks or if he was traded because he hasn't been that good this season. Whatever. They do seem like an aimless team, and it's weird to hurriedly trade someone who publicly points that out.