Russia won the bid to host the 2018 World Cup. They beat out competing bids from Belgium/Netherlands, England, and Portugal/Spain. And that makes sense. Russia's becoming more and more of a player in the game of soccer, it's a massive country, a growing economy, and the World Cup has never been played there.

But Qatar winning the bid to host the 2022 Cup is a bit surprising. Only 1.7 million people live there. And granted, it's a rich country, but it's just so tiny. How many soccer stadiums can they have in the 164th largest country in the world?

Qatar defeated bids from the US, Japan, South Korea, and Australia.

I know that expanding the game to new places is important, and 3 out of 4 of those countries have hosted World Cups in recent memory, but Qatar? They don't even follow the "q with a u" rule.

And what about the weather? June and July in Qatar see average daily temperatures surpass 106 degrees. And for night games, enjoy the average LOW temperature of 84.

I'd been hoping that the US would host the 2022 World Cup. And failing that, Australia. But it looks as though if I want to attend a World Cup soccer game, I have to go to kidnap capital of the world Brazil in 2014, or mafia run Russia in 2018, or a country that has a "defense co-operation" agreement with Iran in 2022.

I'm pretty sure the members of FIFA received some A-rab money for all this. 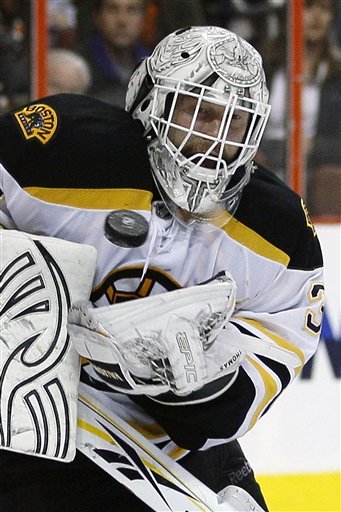 One thing the Bruins lacked in their painful collapse to the Flyers a few months ago was Tim Thomas in net. It's not that Rask had a bad series, he just didn't have a very good one. But last night, Timmy shut down the Flyers, stopping all 41 shots (including a penalty shot) for his 5th shutout of the season.

Fun fact: Thomas didn't collect his 5th career shutout until 13 years after he was drafted. Now he has 22.

But it was really a team shutout. Thomas played his part, but the Bruins as a team blocked 16 shots, 4 each by Boychuk and Chara. They also did something they hadn't done in 6 straight games: score first.

The return of David Krejci has reignited the Bruins' #1 line, and the Power Play. When he was on the ice, the Bruins' entry into the zone was just so much better, so much smoother. That's how Bergeron got his PP goal (technically unassisted, but it was Krejci and Lucic who set events in motion).

Seguin scored on a breakaway. It was nice to see both he and Ryder do something on offense once more. Ryder's settled into a nice drought of production. After 4 goals and 6 assists in his first 12 games, he's contributed 2 goals and 2 assists in his last 11 games. That's Michael Ryder for you. Unreliable and occasional offense.

Lucic's empty-netter was his 11th of the season, and that leads the team. It's both good for him that he's atop the stat sheet in the category, and also kind of scary for the rest of the forwards.

The Bruins now have the best road record in the NHL at 9-3-1. If only they could figure out how to play at home.

Hopefully, they learned a few lessons from this game. They adjusted their neutral zone play and their breakout. They were more fluid on offense. The forwards still aren't physical enough, though. Look at the Flyers. Their top-scorers are also their top penalty-minutes guys. They're big, aggressive, and punishing. There are some forwards on the Bruins like that, but not many. And for a team that struggles to score, they need physical players to win battles on the boards, wear opponents out, draw penalties, et cetera.