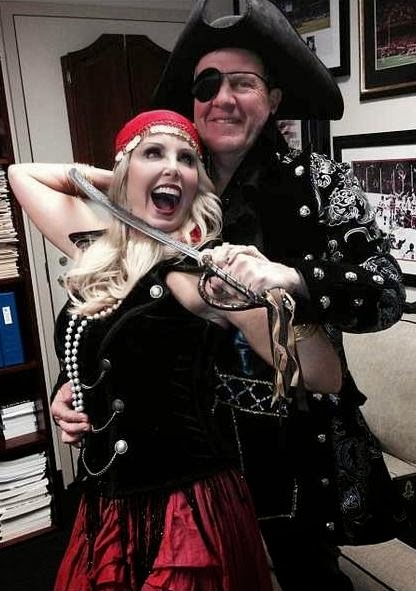 When asked why he chose to dress as a pirate for Halloween, Patriots head coach Bill Belichick explained to the assembled media "Well for this particular Halloween, we felt like a pirate was the best balance between frightening and fun. That's the balance we try to find this time of year. It also allows a lot of flexibility for a sort of group thing. So you can have multiple people dress as pirates together, or even have two sets of people dress as two rival groups of pirates. Then they can have pirate battles, swashbuckle, things like that."

One reporter pointed out that Belichick wore the same costume in 2009. "Right. That's one of the other advantages of the pirate costume. You can hang onto it, use it again later. We felt like that costume worked well in 2009, so while we haven't used it every single year since then, it's always been an option for us."

Another member of the press asked if the costume pulled a "Josh McDaniels," and spent a few years in Denver and St. Louis before coming back. Belichick stared at the reporter's forehead, cleared his throat, and blinked.

When asked if he had fun at the party, Belichick answered "We had as much fun as we'd expected. That's a good party they have over there. Lots of fun activities you have to prepare for. They have particularly large goodie bags, which is something that's always tough to plan for. Thankfully the pirate costume we used has ample pocket space, which real pirates used for doubloons and booty. We used that pocket space for treats."

Belichick was asked what his favorite Halloween party activity is.

"Bobbing for apples. First of all apples are healthy snacks. Secondly the bobbing itself demands a balance of different things. It takes skill and determination to find and capture the apples in the bucket. It also takes focus as the brain's supply of oxygen diminishes. It's a good test of abilities."

According to sources, Belichick has lobbied the NFL to include apple bobbing in the Combine.

Then there was a question about Belichick's favorite Halloween candy.

"KitKat. KitKats give you a couple of options. At the Fun Size level you can have all of it at once, or one piece now, save another piece for a later snack. Or you can share a piece with a friend. With the big KitKats you have four pieces, so you can have two, your friend can have two. Or you can have three and give your friend one. Or four friends can all have one piece. So you get to split up the enjoyment in the way you think works best for that particular snack time."

When asked if he viewed draft picks like KitKat bars, Belichick rolled his eyes, sighed, put on an eyepatch, and swung out of the room on a chandelier, effectively ending the press conference.