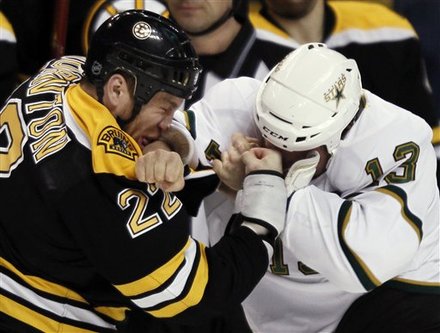 The first 35 seconds of this game saw three fights and a goal. And the first 4 minutes saw four fights and two goals. And by the end of the night, 91 penalty minutes had been dispensed, and 9 goals scored. So yeah, this was a pretty action-packed game.

The 6-3 scoreline doesn't convey how thoroughly the Bruins dominated this game. The referees helped slow the B's down in the 2nd period. They disallowed a goal by McQuaid that would have made it 5-0. Then there was the matching 10 minute penalties to Chara and Ott, which kept the Bruins' leading ice-timer in the box.

Tuukka Rask had a bipolar outing. He was brilliant in some key stages. He made a Thomasesque post-to-post stop to keep the score at 2-0 in the 1st. In the 2nd, he made 10 stops in a 5 minute penalty-kill. In the 3rd, he allowed a pair of soft goals that gave Dallas some hope.

Even though he's 6' 2", Rask isn't that big of a guy. He doesn't occupy much space. He's 171, and a bit stringy. Whereas Thomas is 5' 11" and 208. So while Rask excels at the close-quarter stuff, he's vulnerable in long-range situations, when he simply can't make himself big enough to properly cut down the shooter's angle. Plus, he's nowhere near as balanced as Thomas, which is why it takes him so long to move from side to side.

Bergeron scored his 18th and 19th. He scored 19 all of last season. He hasn't reached 20 since the concussion but he's right on the doorstep.

Lucic scored the first goal, his 21st. Krejci set him up with a move so brilliantly subtle that the defender didn't even know he was being manipulated.