BC TO PLAY IN SAN FRANCISCO

Once again, BC will make the trip to San Francisco, this time to play in the Kraft Fight Hunger Bowl. They'll once again face a quality opponent, this time in #15 Nevada. The Wolfpack are 12-1, their only loss coming at Hawaii. They were the ones who beat Boise State.

Oh, and San Francisco is about 220 miles from Reno. So, don't expect BC to be the favorites in this once. Then again, I think the Eagles' defense might prevent utter humiliation. And if BC do somehow find a way to win, it'll be a nice cap to a forgettable season. Though, that's wishful thinking.

BC football has gotten to the point that they're expected to make bowl games, even when having off years. That's good. But they've been stuck in this rut, cycling through the same low-level ACC affiliated bowls, for some time now. Can the program move forward, and contend for those higher games, like the Chick-fil-A and Champs Sports Bowl?

I doubt it, at least in the foreseeable future. And down the road in Storrs, the UConn Huskies are going to a BCS Bowl. They won the big game at the end of the year, which BC has failed to do in years past. And winners get the glory.

The game will be played in the Giants' homefield of AT&T Park on January 9, at 9.

Email ThisBlogThis!Share to TwitterShare to FacebookShare to Pinterest
Labels: BC Football, College Football

BRUINS BACK TO BAD HABITS 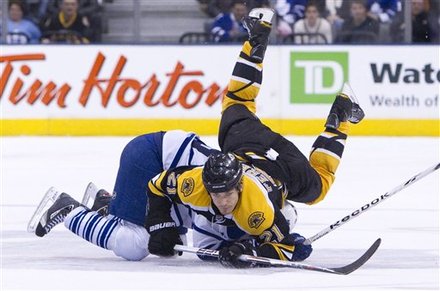 I know not to expect 8 goals a game. I know with the forwards the Bruins have, they'll sometimes struggle to score. That's not too frustrating. They are who they are. But when they fail to keep a lead, it's infuriating.

To be fair, this was the first time the Bruins had a lead in a game, and wound up losing the contest. That's impressive. But how much of that is due to Tim Thomas making unreal stops? And he almost stole another one Sunday night.

The Bruins were 42 seconds from a 2-1 road win. One might argue "they were close to winning that." But throughout the 3rd period, they were closer to losing it. It's just that Thomas kept them up 2-1 with some ridiculous saves.

Although that one came in the OT, you get the idea.

The Bruins once again resumed their bad, undisciplined, porous neutral zone habits in the 3rd period. In their 3-0 win over Philly last week, they maintained the lead by not allowing the Flyers to bring the puck up the ice without expending some effort. It was exactly how the Bruins need to play in order to win.

They're going to find themselves in 2-1, 3-2 games throughout this season, and in the post-season. They don't have the offensive talents to regularly add to their leads, so they need to make it as hard as possible for their opponents to even reach the offensive zone.

Toronto sucks, and the Bruins lost a point up there. It's a shame. Not only do these points add up, but these neutral zone habits have been plaguing the team for years.

Sabres in town tomorrow night on Versus.


The Sox traded three prospects and a player to be named to the Padres for Adrian Gonzalez. The highly touted, highly sought after first baseman is the biggest Red Sox acquisition since Daisuke Matsuzaka. And similar to that circus, it's been just a bit over-glorified.

Gonzalez is a great player. And after losing Victor Martinez, and likely Adrian Beltre, this move makes perfect sense. With the returns of Dustin Pedroia and Kevin Youkilis, the Red Sox should have a much more potent offense in 2011.

Gonzalez will also benefit from playing 81 games in Fenway, and 0 in PetCo Park. His numbers are markedly better away from his former home field. Despite having that handicap, he hit .298 last year, with a .393 OBP, and 31 homers. He's surpassed 30 HRs each of the last 4 seasons, and is only 28. He's entering the prime of his career.

At the moment, the Sox lineup could look like this:

Pretty good, eh? However, I still can't help thinking how much better it would look with Victor Martinez in that 5 spot. And of course, Carl Crawford occupying an OF position would improve things dramatically. It's still beefy in the middle.

But scoring runs wasn't what undid the 2010 Red Sox. It was, ironically, preventing them. The Sox allowed the 8th most runs in baseball. They were 22nd in team ERA, 23rd in bullpen ERA, 23rd in Save Percentage, and blew the 4th most Saves in all of baseball.

In other words, this team needs pitching in order to have any prayer at once again reaching the World Series. So while this trade is a big step in the right direction, it comes after the Sox took a step back and allowed Victor Martinez to leave. And there's still quite a staircase for the Sox to climb with their pitching situation.

So I'm glad. But hardly thrilled. Like everyone else seems to be.
Posted by rob at 10:00 AM No comments: