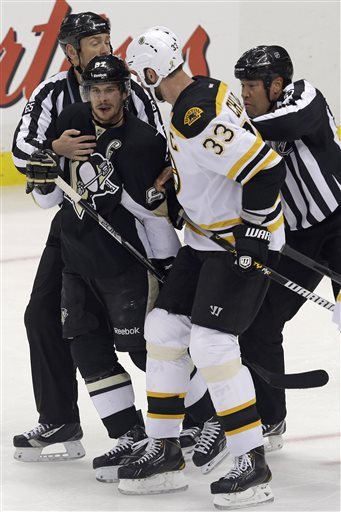 Before reveling in the Bruins' 3-0 victory over Pittsburgh, I must point out that the score doesn't do justice to how close this game was. Pittsburgh hit 3 posts, and one puck dribbled along the goal-line, kept out by flakes of snow, and perhaps the hockey gods, who are still cross at Matt Cooke for what he did to Marc Savard. And Erik Karlsson. And what he tried to do to Adam McQuaid.

What made Cooke's hit on McQuaid so dirty is what led up to it. This wasn't an instance of Cooke contesting with McQuaid, then McQuaid putting himself vulnerable, then Cooke deciding to finish his check anyway. Cooke was jousting with Krug. McQuaid, apparently unchallenged, went to the boards to get the puck. When McQuaid turned and made himself vulnerable, Cooke stopped playing Krug, and with a surge of energy he went after McQuaid's back, driving McQuaid, spinal column first, into the boards. Cooke was not going to touch McQuaid until McQuaid showed his numbers to Cooke. McQuaid's vulnerability is what attracted the vulture Cooke to hit him.

And the reaction of the Pittsburgh crowd demonstrates the kind of spoiled morons they have for fans down there.

Anyway, to the game. The Bruins did a few things that put them in position to win:

#1 Rask
Tuukka was great. He made a few tough saves. He didn't make saves tougher. He adapted his play to each situation. Sometimes he looked like a standard butterfly goalie, solid and predictable. Other times he flailed around like Dominek Hasek, keeping the puck out of the net with instinct and sheer will.

#2 No gifts
The B's did not have bad shifts. They didn't make bad turnovers in dangerous areas of the ice. Pittsburgh is good enough to generate their own offense, for the Bruins to win this series they can't afford to give the Penguins bonus opportunities.

#3 Neutral zone
The Penguins were almost never able to move the puck through the neutral zone without some minor disruption. This threw off their timing, and more importantly it frustrated them. They're used to skating through the zone unimpeded. This got under their skin more than anything, I think.

#4 First line play
Lucic, Krejci, and Horton find another gear in the playoffs. Lucic becomes a speed demon. Krejci becomes a tough along-the-boards grinder, and Horton becomes a smooth scorer. Horton has 4 multi-point games this postseason. He's also +17. Krejci is +14, leads the Stanley Cup Playoffs in points, and has the second most goals. Lucic is +11.

#5 Under their skin
Zdeno Chara is +9 in the playoffs. He goes against the best forwards the opposing teams have, and he's +9. And having to play against him every night pisses off even the best of players. In this game both Evgeni Malkin and Sidney Crosby tried to get physical. That's way out of their element. And for Crosby against Chara, that's way out of his league. Chara would end Crosby. When Crosby was trying to antagonize Chara (and also elbowed Rask who had a great "wtf, mate? I'm a goalie" reaction) it reminded me of footage from protests in the Middle East, when unarmed civilians throw rocks at tanks. It's like really man? Do you really want this to get real? This is what Chara did to a guy who was 6' 6" and 238. Crosby is 5' 11" and 200.

Crosby, who is teammates with Matt Cooke, had this to say about the game's level of physicality:

"They're letting a lot go out there, and the more it gets like that, the more it’s going to escalate. You can only control and channel that stuff so much. You keep letting guys do that stuff, you’re just going to push the envelope. That’s something we obviously want to stay away from, but it’s kind of a natural thing when it gets like that."

What a whiny dink.

So this was a great win. Starting a series with a road win, it doesn't get any better than that.

All this being said, you can't rely on the posts all series long. You can't lean on your goalie and one line all series long. And I'm sure Pittsburgh will adjust and adapt to what the Bruins are doing to them in the neutral zone.

There were also a lot of "zero tolerance interference" penalties called. This favors Pittsburgh, who have the best PP units the Bruins have faced, and also have an aggressive PK group. The fewer penalties, the better.

Game 2 is tonight. A win would be titanic. A loss wouldn't be the end of the world. The Bruins are playing with house money, which has sometimes been when they play their worst. This is a chance, however, to really get in the driver's seat of this series.