Bruins Get Some Sequestration Through the Senators 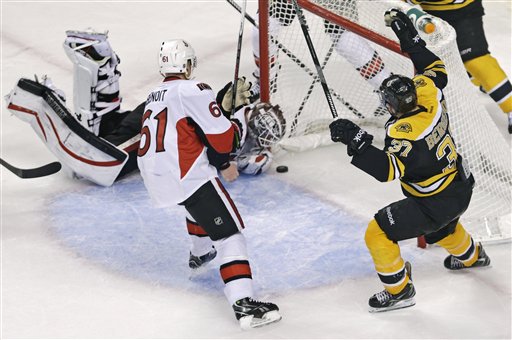 If you took the speeds of the two Bruins goals, and combined them, then drove a car on I-93 at that speed, you'd get pulled over for driving too slow and being a hazard to traffic.

This team is winning games, even when they aren't the clearly superior team. And that is good news and bad news. The good news is they know how to win close games. They don't give up many cheap goals, they don't make defensive mistakes, and turnovers are rare.

The bad news is that the Power Play stinks, and that some of the goals this team scores almost seem accidental.

There is a lot for this team to work on before the Playoffs. But before those Playoffs come, I will spend a few moments emphasizing the positive. Tuukka Rask has developed into a premium NHL goalie. He's gotten faster. At least he seems to have gotten faster. What's actually happened is he's reading the play better. He's anticipating. He now has a quick mind and quick reflexes.