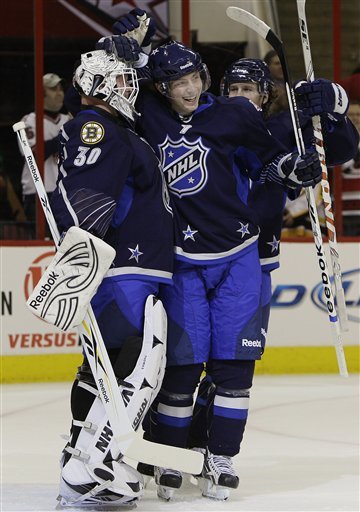 Why do we criticize All-Star Games so much? Is it because we're jealous of the good old days when Pete Rose took an exhibition game too seriously (probably because he had ten large riding on it) and ended some guy's career in order to win a contest over nothing?

Players don't take All-Star Games seriously. Nor should they. About two decades ago, they all realized that they have more in common with players on opposing teams than they do with their coaches, their teams' executives, their teams' owners, and even their fans. So why the hell would they go out, risk their health, and risk the health of their colleagues, for some meaningless exhibition?

I'm glad the NHL isn't trying to make players take the All-Star Game seriously. Unlike Major League Baseball. And MLB has the best ASG anyhow, so they shouldn't bother with making "it count." The NHL is trying to make the game more fun. The whole captains picking team concept worked out well. The game was boring, with no checking, no contested pucks, even offensive breakaways seemed slow. The skills contest had nice high points, but dragged on too long. All in all, it was a marginally successful weekend. But what's the harm in an exhibition game being just an exhibition?

Tim Thomas is now 3-0 in All-Star Games, which is a statistical quirk more than anything else. He always seems to be allotted the 3rd period to play, and his teams win. He actually blew a Save, if baseball terminology were employed, and then got the win.

Zdeno Chara had an assist, was +1, and won the fastest shot competition. Again. He broke his own record with a 105.9 MPH slapshot.

I think the NHL should stick with the captains picking the teams. However, they also need to continue to allow players to participate in the Olympics. Those games are true displays of the best players playing their best.

I'll also say that while the NHL has failed in sunbelt cities like Miami and Phoenix, it has thrived in Raleigh. The Hurricanes have built a solid franchise and they have a legitimate fanbase that's capable of supporting an NHL team.