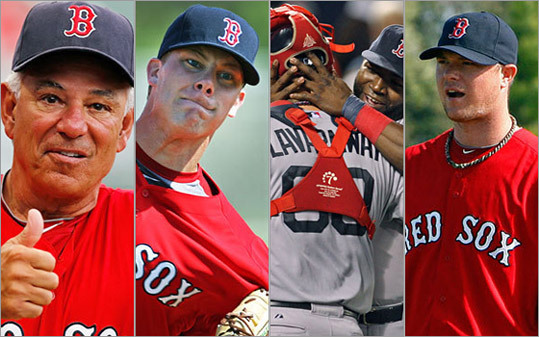 Jon Lester is whining again, about not getting enough credit, about high expectations. He's reciting his stats and his record, and making excuses. He's become very annoying and very unlikable. He seems to care more about perception than performance. Just pitch, please.

David Ortiz is still making excuses and is still injured. He blames Bobby Valentine for last year's struggles. And he's still hobbled by an injury that a younger man (or a man taking HGH) would have healed from long ago. Ortiz, like a number of his teammates, made excuses in September of 2011, all throughout 2012, and they're starting off 2013 the same way. 2012 was all Bobby V's fault.

There is no sense of responsibility on this team.

Clay Buchholz remains fragile. Buchholz has always been an IHC (if he can...) type of pitcher. If he can stay healthy. If he can get off to a good start to a season. If he can pitch consistently. And in this Spring Training, many are still saying "If he can" about him, and still being optimistic. I've gotten to the point where it's "can he?" with Mr. Buchholz. Can he stay healthy? Can he pitch in April like he can pitch in June? I just don't know.

But there's a new manager in town, so things are different, right? We have a tough, no-nonsense, disciplinarian manager now. And he'll set the players straight.

Didn't people think that during February of 2012? Wasn't Valentine supposed to set the clubhouse straight, get rid of the alcohol, and stop pampering the players?

I like John Farrell much more than Bobby Valentine. As a Manager, however, what has Farrell accomplished that we here have so much allegiance and admiration for him? He was a decent pitching coach, and kept Beckett in line. At least for awhile. Why does that make us think he can solve all the problems this team has?

Farrell has already had to draw on his disciplinary tools in dealing with Alfredo Aceves. The versatile reliever was disinterested in participating. We have yet to see if Farrell's chat with Aceves will yield anything. At least Farrell didn't pull a Bobby V and embarrass the player in front of the whole team... for not properly doing a drill he was never instructed how to do.

And there's Pedro Martinez too. He can instill some discipline into these young men.

There are new players in town. Role players and clubhouse character guys.

It's early. Change takes time. Maybe the Sox will change in 2013. But up to February 20th of this year, more has stayed the same than changed.