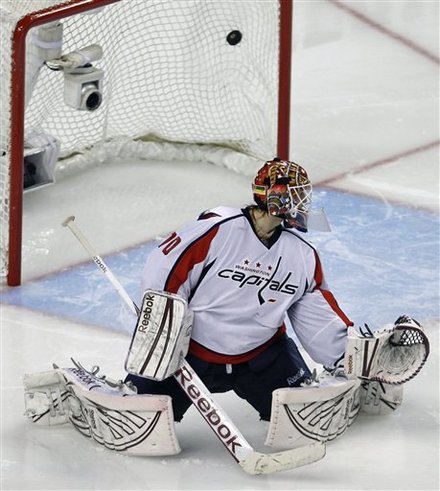 Tyler Seguin won the Bruins' 7th Player Award. But that was because of Pink Hat voting. No offense, to Seguin, but Chris Kelly deserved the award. He scored a career high 20 goals, and 39 points this season. He's done all the little things that we've come to expect from the Bruins' 3rd line. And last night, he won the fucking game.

He was put in a position to do so by Tim Thomas. Thomas didn't have to stop many shots (only 17), but he worked hard to stop those shots. His save on Ovechkin in the 3rd was sheer brilliance.

If the Bruins had lost this game, it would have been really, really, really sad. The Bruins outshot the Caps 26-7 at one point, and that wasn't including the 17 shots the Capitals had blocked up to that point.

Brandon Holtby gave up so many soft, juicy, medium-rare served on a sesame seed bun rebounds. And the Bruins lacked a presence in front of the net to capitalize on them.

I missed Mark Recchi. For the first time this season. His front-of-the-net prowess wasn't just due to strength. It was due to his impeccable timing. He knew when to get to the front of the net, when to put the stick on the ice, when to put himself in position to make the play. Holtby's rebounds gave the Bruins numerous tantalizing opportunities, but they didn't move to the front of the net at the right time to capitalize on them.

The battle between Ovechkin and Seidenberg was interesting. And I have to give Seidenberg Round 1 on points. But barely. Ovechkin is a new kind of high scoring forward for the Bruins to deal with in the playoffs. He's not Stamkos. He's not a Sedin. He's a 6' 2" 234 pound block of Russian toughness. The kind of toughness that fought and won the grueling Battle of Stalingrad in 1942-43.

The Bruins need to attack Holtby more. Not just token shots from the point. Be patient on the rush, wait to get a body in front of the net, then shoot. Hope for a rebound and it will be there to tap in.