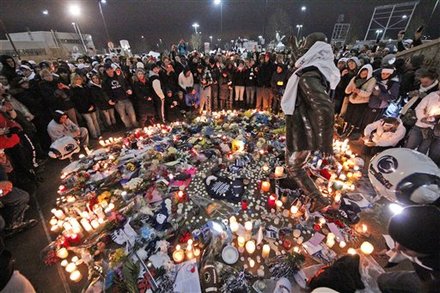 Joe Paterno lost his battle with lung cancer yesterday. I don't mind the outpouring of grief on the Penn State campus. I fully understand the praise he's getting for all the good he's done throughout his lifetime. After all, when someone passes, it's human nature to remember them fondly, and focus on their positive aspects.

At least he admits that the 85 year old guy died partially due to cancer.

This is one word short of accusing the Penn State trustees and ESPN of being accessories to murder. These blind supporters of his can't even admit that his death was a normal human death.

Jordan Norwood called him "one of the most influential men in our nations history [sic]."

Wasn't it Martin Luther King Day last week? And don't we celebrate Washington and Lincoln's birthdays soon? I know these guys didn't win any national titles in the 80's, but maybe Paterno's impact on national history is small, even trivial.

Mike Ditka called him a "true hero," which was echoed by a Penn State student on ESPN who said quite simply "He's a hero."

Paterno was not a hero. Even without the recent scandal, he was never a hero. He might have been a great leader and teacher, but not a hero. Heroes risk something. Heroes sacrifice.

He could have been a hero to some kids, but he decided that informing his AD was sufficient heroism for one day.

"It's kind of tragic that they [Penn State] weren't able to do something nice for him before he passed. It's kind of a shame..." That's what a fan on SportsCenter said.

It's kind of tragic that Paterno wasn't able to do something nice for some kids before their lives were ruined. It's a shame that even in death, he is still worshiped as a demigod, and not a man. His contributions deserve praise, and the people he's affected should mourn him. One mistake cannot define a man. It's okay to grieve him and emphasize the positive. But to address and summarily dismiss the negative is asinine, ignorant, and annoying.

I wouldn't mind if guys like Blackledge ignored the scandal in their time of grief. But to attribute his death to the Board of Trustees and the media is simply moronic.
Posted by rob at 12:00 PM No comments:

The Other Exciting Games This Weekend 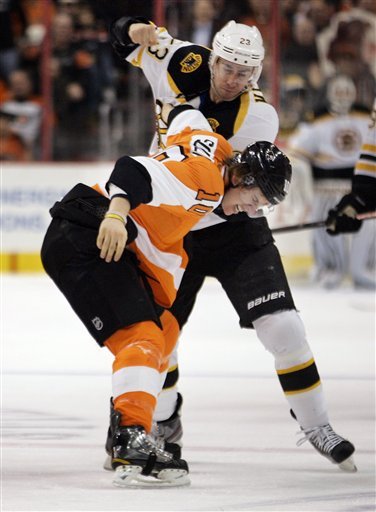 I'm very happy that the NHLPA rejected the proposed realignment that would have reduced the number of times the Bruins play teams like the Devils, Rangers, and Flyers. Not only are these good Eastern seaboard rivalries for fans, but the hockey is simply fantastic to watch.

Starting with the Rangers game, it was a good, close-checking, hard fighting playoff style game. For the Rangers, who are looking to prove something to themselves as well as the League, it was a playoff game.

The Bruins needed to get more from their Power Play unit. Not necessarily scoring. They only got 2 shots on goal in 4 PP chances. That's not good enough. At the very least, you have to generate some opportunities, make the goalie work to kill the penalty.

Another thing the B's did was take too many shots that were clearly going to get blocked. It's one thing to shoot through traffic and have a defenseman block the shot down low. But when forwards are pressuring the point as much as the Rangers' were, it's inevitable that the shot won't get to the goalie. So don't take the shot.

One positive from the Rangers' game was how productive the defensemen were. Andrew Ference has become a sniper (and a thug, according to the NHL. More on that later).

The Flyers game saw more special teams struggles. The Bruins allowed 3 PP goals. There were some weird bounces that favored the Flyers. But the B's also allowed Hartnell to repeatedly set himself up in the middle slot. A hat-trick resulted.

The officiating was interesting. It seemed like the Flyers would hit a Bruin up high, there'd be some drama, an odd number of penalties issued, and the Bruins would wind up being shorthanded. Apparently, checks aimed at the head aren't as severe as standing up for a teammate.

That's the game, though. It can't be easy for a ref to keep a lid on these kinds of games.

I know the NHL wants to make sure that teams like the Bruins, Rangers, and Flyers visit every struggling market in the NHL, from Columbus to Phoenix to Nashville to Miami. The NHL wants these markets to have some games they can promote and sell out. But it's hockey welfare, redistributing wealth to markets that don't care much about the game.

How often do you see a natural hat-trick and a Gordie Howe hat-trick in the same game AND have it occur in front of fans who know what those terms mean?

The Bruins are in Washington Tuesday. They'll also meet the President. I'd like to hear a conversation between Marchand and Obama. "You got big ears, eh?"
Posted by rob at 11:00 AM No comments: 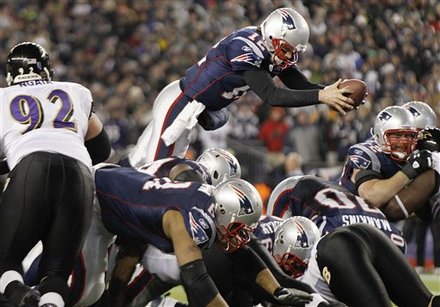 The defense won this game. The defense and Billy Cundiff. It certainly wasn't the offense that won this game for the Pats. While I don't think Brady "sucked pretty badly," he wasn't good. The Patriots lost the turnover battle, Flacco in many ways had a better game than Brady, the Ravens accumulated more yards, and held the ball longer. But the Pats defense made some big plays in big moments and that's why the Patriots are going to the Super Bowl.

The defense did allow a pair of token touchdown drives, struggling to contain Rice and giving up chunks of yardage in the air.

But when Woodhead fumbled a kickoff return on the 28, the defense held Baltimore to a field goal (which gave the Ravens a 4 point lead instead of an 8 point lead). Spikes' interception might have been a big play if Brady didn't throw a pick a few seconds later.

In the 4th, the Ravens had a 3rd and 3 on the Patriots' 30 (48 yard field goal range). Wilfork stuffed Ray Rice for a 3 yard loss, and Baltimore was forced to go for it on 4th and 6 instead of kicking a field goal. The Pats did not allow the Ravens to convert that 4th down thanks to good coverage and pressure from the aforementioned Wilfork.

The offense had a chance run out the clock late but went 3 and out. The defense did allow a big 29 yard Anquan Boldin reception, which put the Ravens in field goal range. Then Sterling Moore saved the game by breaking up a pass in the end zone, then deflected the next pass. So at the very least, the defense preserved a tie. 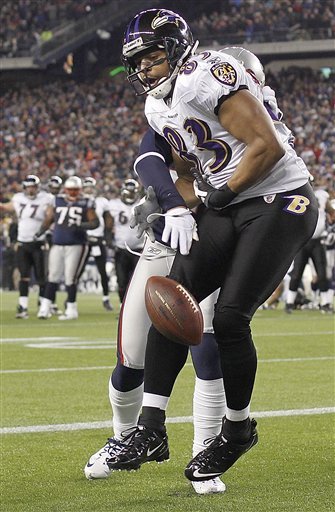 Billy Cundiff did the rest.

The Patriots' offense wasn't bad all game. They just couldn't come up with many big plays. They struggled in the Red Zone, the Ravens got timely pressure on Brady, then there were the turnovers. Brady threw 2 picks, he also had one called back because of an illegal contact penalty, and he threw another one after an encroachment flag. He was not that sharp. He also missed a wide open Gronkowski and what would have been a touchdown in the 1st quarter. He missed a number of passes, and frequently threw into double coverage.

The Pats' best player had his worst game of the season, but because of Wilfork, Spikes, Moore, and Ellis, the Pats still won. And Brady will get a chance to redeem himself against the Giants.