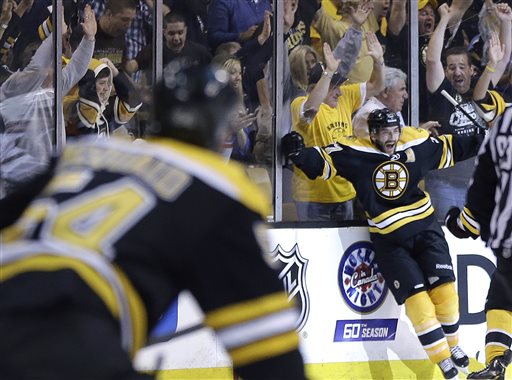 So much to say about this game. To make a long, long story short: the Bruins played their worst 3 periods of the series then played 2 of their best. Tuukka Rask bailed them out 53 times. Vokoun and Rask dueled in the overtime. Jaromir Jagr kept making good plays and eventually the plays Jagr started were finished by Brad Marchand and Patrice Bergeron.

Now let's get into details. For most of this game I was getting angrier and angrier at the Bruins. They scored early thanks to a Pittsburgh mistake in coverage, then played the type of hockey that has allowed opponents to come from behind against them all season long. For one stretch in the 2nd they were outshot 10-2. In the 3rd they were outshot 14-4. Pittsburgh had 8 scoring chances in the 3rd, the Bruins had 0.

The B's weren't dumping the puck on offense. They were trying to carry it in, then screwing around in the middle of the ice in the offensive end, instead of keeping the puck along the boards and trying to win battles. On the power play this inept strategy was exposed even more acutely. There were also a handful of neutral-zone turnovers that the Bruins simply didn't make in Games 1 and 2. Also some dumb, inexcusable penalties. All this gave Pittsburgh great chances to score. Rask was the reason Pittsburgh didn't score.

This was Rask's stand-on-your-head, become-a-Conn-Smythe-contender, where-legends-are-made performance. He was unflappable. The only goal he allowed, no human goalie could save. 53 saves on 54 shots. In this series he's stopped 108 of 110 shots (.981 SV%), and only allowed 2 goals in about 11 periods of play (0.56 GAA in this series), all against the highest scoring offense in the NHL. Such a high level of goaltending against such high level of scorers sounds eerily similar to what Tim Thomas did against the Vancouver Canucks in 2011.

Bergeron won the game in a fraction of seconds. Rask's play for 95 minutes allowed Bergeron to win it.

Some honorable mentions to some Bruins' defensemen. Zdeno Chara played 42:05, all of it great. In the 2nd regulation period he broke up a golden scoring opportunity that Evgeni Malkin would have had. It was a play only he and his vast reach could have made.

Andrew Ference logged almost 35 minutes of ice-time. He played his solid, physical brand of hockey. He left a few marks on a few Penguins.

Johnny Boychuk led the Bruins with 5 blocked shots, 2 of which came in double-overtime when Pittsburgh mounted a major scoring threat.

Dennis Seidenberg didn't have a bad game, but did make some weak/unwise passes trying to move the puck out of the defensive zone. This led to longer Pittsburgh possessions, more shots, more chances, more anxiety from me. However, he sharpened up in overtime.

All of the Bruins seemed to elevate their games in the overtime. Milan Lucic skated hard, Jagr looked half his age, Horton created a few chances for himself, even the faceoffs seemed to even out.

One player we didn't see in overtime was Gregory Campbell, who blocked a shot with his femur, then gutted out the remainder of the shift, doing what he could as a stationary obstacle. That determination energized the Bruins for the next 4 or 5 shifts. That's what you can't see on paper when you look at a roster. That's what you can't count on when all you do is assemble talented all-stars like Pittsburgh. This group of players in Boston have been together for a long time. They play for each other and for the team. And newcomers like Jagr and Krug see that, want to be a part of it, and if they buy into it they're accepted.

I don't know if Pittsburgh has that. Are Crosby and Malkin leaders? How does their leadership stack up against Chara or Bergeron? Or Ference? Or Campbell? Or Thornton? Does Pittsburgh have the same camaraderie in their rank and file? Chemistry counts.

Game 4 is Friday night. A sweep would be fantastic for so many reasons. Crosby, Iginla, and of course Cooke would all end their season in Boston. It would be glorious. Let's hope.