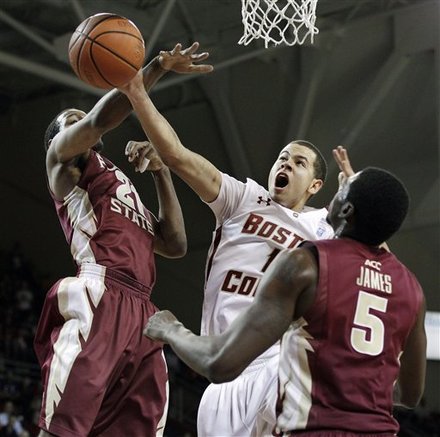 It's been a rough year for the few BC basketball fans that bother to show up to the Conte Forum each game. The Eagles were 7-16 coming into last night's game, at the bottom of the ACC standings. But those who did show up were treated with an upset win over Florida State, who were sharing the top of the standings with North Carolina.

To say this has been a rebuilding year might be overly polite to the Eagles. BC is loaded with freshmen, and this season is essentially a lengthy pre-season for the 2012-13 campaign. You can tell that coach Steve Donahue is trying to teach his team how to play the game properly, so once their skills are honed, they can contend to return to the NCAA tournament.

Which means this season's games look more like practices and scrimmages. Except when BC hits 10 of its 22 three-pointers and Florida State turns the ball over 14 times.

I think the Eagles will be respectable in a few years. This wasn't a glimpse of things to come as much as it was a statistical aberration. But it was quite fun to be there and watch it. And the 4,000 or so who showed up got more than their money's worth, and got their loyalty rewarded.