There are rumors that Adrian Beltre has been offered a 5 year deal by the Oakland Athletics worth $64 million. The Sox would be fools to match this. Beltre is only 31, but his career is an up and down roller coaster of inconsistency. And he's known for having a big year when his contract is up, only to fall off the next season.

Victor Martinez turns 32 in a few weeks, and he plays a more physically demanding position than Beltre, and he doesn't play it very well. His 2010 campaign wasn't as productive as Beltre's, but it's just one year in a steady stream of consistent performances. He'll hit .280 to .300, with an OBP between .340 and .380, and slug between .460 and .500. Because of this offensive reliability, Victor Martinez is worth a 5 year deal.

Martinez will not catch forever, and should be moved to 1B and/or DH. But he can catch for a year until Ortiz's contract runs out, then move to DH. He's a better hitter when not catching anyway. In the meantime, the Sox can find a more permanent solution to their catching situation.

And that's the other big difference between Beltre and Martinez. The Sox can lose Beltre, then trade for or sign another good corner infielder to replace his production. That's not going to happen very easily at catcher.

Beltre's not worth any deal longer than 3 years. Victor Martinez, due to his consistency, and the immediate lack of depth at his position, is. 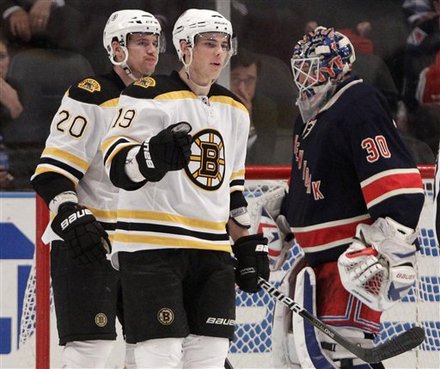 I don't like how Julien is playing Seguin. Lining him with Paille and Thornton is a misuse of talent. Give him two or three shifts with Lucic and Horton. I'd also love to see Seguin and Recchi on the same line. The Bruins are without centers, and it's a good opportunity to move Seguin around as he learns how to be an NHL center. Don't put him on a line with Paille (45 career goals) and Thornton (18 career goals).

I also didn't like how the Bruins played when they went up 3-1. The Rangers became more aggressive on the forecheck, and once again, this baffled the Bruins. Eventually, the turnovers turned into a goal.

The Bruins' Power-Play is now 2 for 19 since Krejci left the lineup. As much as that demonstrates Krejci's cleverness, it also shows a severe lack of offensive talent and wherewithal on this team. Role-players like Jordan Caron and Daniel Paille and even Patrice Bergeron are supposed to be the complimentary pieces to the puzzle, not the core components.