Why You Choose Offense Over Defense at Short-Stop

Jose Iglesias is a defensively sound short-stop, but the Red Sox simply couldn't afford risking another hole in their lineup. They'll be breaking camp without Crawford, Cody Ross hit .240 last year, Saltalamacchia hit .235 in 2011 and is a career .244 hitter. So that's three holes in the lineup already. Also known as an easy inning.

Anyone who complains about the Sox "sacrificing defense for offense" is failing to see the larger picture that Iglesias would be hole #4 in that lineup.

And with the bottom of the rotation as shaky as it is, the Sox need to be able to have big innings and score runs in bunches. It can't just be Ellsbury-Pedroia-Youkilis-Gonzalez-Ortiz doing the production. There need to be hitters at the bottom of the order that can at least make an opposing pitcher work to get them out.

And if Iglesias is as great as some believe that he is, he'll do well enough in AAA to force his way onto the MLB roster. Playing time isn't given, it's earned. 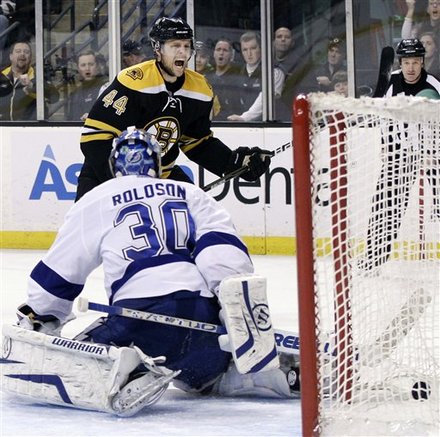 In this recent stretch of quality play, this was the first come-from-behind victory for the Bruins. Part of me needed to see that even when down a goal, this team would stick to the plan, be resilient, be tough to beat, and wind up prevailing.

What a night for Zdeno Chara. Honored for his 1,000th NHL game he factored in three of the Bruins goals. These weren't token assists either. Shawn Thornton technically scored the Bruins' first goal, but it was Chara's drive toward the net that caused the goal. Then having Chara and Seidenberg as the D-tandem when 4-on-4 is something every team in the NHL should be jealous of.

If not for Stamkos and a very good effort from Roloson, the Bruins would have won this game with ease. Stamkos is a goal scoring machine.

The Energy Line provided more than a little energy. Thornton scored and had 5 shots on goal. Campbell had 2, Caron had 1. 8 shots for the 4th line. Not bad.

The Power Play looks better. Peverley's return may be responsible for that. It's cleaner. There are less silly struggles with entry, less static formation passing around the outside. I can feel a big night coming for the PP unit.

Brian Rolston extended his point streak to 7 games with an assist on Pouliot's goal.

The Bruins are now 5 points ahead of Ottawa, who are idle until Saturday. The B's host the Capitals on Thursday. With a win, the Bruins will clinch a spot in the playoffs.