So Many Reasons to Not Watch the MLB All-Star Game 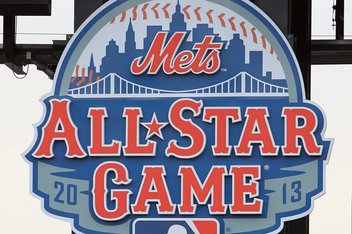 I'll admit that I watched the All-Star Game. And by "watch" I mean I did other things while it was on TV. I cleaned up a little bit, ate my dinner, I'm even writing this as the 9th inning plays out. My back is to the screen as I sit hunched over the computer sitting on my desk in the corner of the room. I need to get another beer, and won't pause my TV as I go fetch it.

I'm back. Last Wachusett Blueberry. Not much has changed in the game. And if it had, I wouldn't care. And that's Reason #1 not to watch...

#2 Baseball is slow
And the All-Star Game isn't an exception. Last night's was 3 hours and 6 minutes, considered a short game by modern standards. There's so much time between pitches, in a game that doesn't matter. No tension, just waiting.

#3 The game starts too late
A 3 hour and 6 minute game. That ends at 11:27pm. What's wrong with this picture? I know you don't want to start the game while California fans are still stuck in freeway traffic. Then again, California fans suck. They show up late to their own games, why not make them show up late to the All-Star Game too. Start the game at a modest time for the East and the Midwest. Especially so kids, who still have bedtimes in the summer, can watch.

#4 Fox's production sucks
Fox tries too hard to make their sports coverage epic. Nobody watches sports for the shiny extras, they watch for the game, or because they're degenerate gamblers. The All-Star Game is one of Fox's crown jewels, and they try really hard to make it more than it is. I'm always going to remember that artificial moment when Cal Ripken Jr. left his last All-Star Game, and they brought out a podium to home plate. What a BS, contrived attempt at a tear-jerker moment. The best All-Star moments are impromptu, like when Ted Williams was swarmed by everyone on the mound in 1999, or last night when Mariano Rivera tipped his cap to the fans. As opposed to generated moments such as Neil Diamond singing "Sweet Caroline."

Everything on Fox is overly staged.

How can you listen to these guys call a game that you don't have a rooting interest in? How can you do so without drinking heavily? It's like brain surgery without anesthetic.

#6 Too many players
There are about 80 All-Stars. Doesn't that seem a bit much to play in just one game?

#7 Too many players play
Too many people get into and out of the game. I understand the thought behind each team having a representative on the roster, but why will some Royals fan watch 3 hours of baseball to see his guy play, especially when he doesn't know which inning his player will play, especially when his player will be lucky to get more than 2 at-bats, or more than 1 inning on the mound?

29 players took the field for the AL last night. 26 for the NL. 55 total. 55 players in one game of baseball. Way too many to keep track, especially in a game that you don't have a rooting interest in.

#7 Pitchers don't last
Pitchers are so soft these days. They can't go if they pitched Sunday. Only two pitched more than an inning last night. And if they throw more than 15 pitches, their arms will fall off. In this modern age of sports medicine (both legitimate and illicit), the frailty of pitchers is inexcusable.

This ties in with Fox. There are far too many commercials, too many promotions. Everything is sponsored by something. A millionaire athlete gets a car for being an MVP of a game that he only played in for one or two innings. Every 5 seconds is a commercial or product-placement. It feels more like watching an infomercial than a baseball game. Your viewer is already barely interested in watching, so you saturate the broadcast with ads?

All of the All-Star games in all sports suck. Baseball is the least worst of them all. But none of them are any good. None of them entertain. You shouldn't watch any of them.
Posted by rob at 4:40 PM No comments:

In a desperate effort to publicize their irrelevant, once-edgy-but-now-utterly-mainstream magazine, Rolling Stone have put alleged Boston Marathon Bomber Dzhokhar (in the magazine they use the teeny-bopper Twitter corruption of his name: Jahar) Tsarnaev on the cover of their upcoming magazine. But it wasn't just any picture. It's a glamorizing, softly lit, almost angelic image of the terrorist. It makes him look like a Disney Channel heartthrob, not a heartless sociopath. They tried to make him look as sexy as possible. As much like a rock-star as possible.

Someone should send a copy of Rolling Stone with sexy Dzhokhar on the cover, to every inmate of that supermax prison in Colorado. Include a note that says "Coming soon to a shower near you."

How edgy of you, Rolling Stone, how very bold. And how brave of you to be so bold. They've released a statement defending of the freedom of the press and touting the merits of journalistic integrity. That's why you made Dzhokhar look as pretty as possible on the cover. Because of all your integrity.

If you truly want to discuss his descent from popular teenager to terrorist, why not have two contrasting images: one like this one, and one of him walking along Boylston Street with a bomb slung over his backpack. Or maybe a picture of him juxtaposed with a picture of the carnage he created.

The Telegraph in Britain figured that out.

That would be journalism. That would be provocative and it would elicit thought. Not merely sensationalist and shocking, in order to generate profit.

And if you were truly brave and truly wanted to push the boundaries of freedom of the press, then you'd have a monthly comic strip featuring the prophet Mohammed (illustrations of Mohammed piss many Muslims off), printed alongside the personal mailing addresses of the magazine's staff. That's brave. This is cowardly. This is just a crude attempt to generate controversy and get people to talk about a magazine they probably assumed wasn't on the shelf anymore.

But if you want to go down this road, you can't do this just once. If Taylor Swift or Jay-Z is on the cover of next month's edition, I'll be very disappointed. You want to be edgy, you want to push the envelope, you must do it ALL THE TIME. You bought the ticket, you take the ride.

And I want the pictures to be as sexy as possible. That's the main thing. The type of thing teenage girls tape to the inside of their lockers. When Rolling Stone put Charles Manson on their cover, he wasn't portrayed as sexy. More crazy than anything else.

Anyway, fuck you, Rolling Stone. You're not journalists, you're just trying to pump some relevancy into your outdated, uninteresting rag. You're not trying to tell a story, controversy be damned. You're trying to make money off pain and suffering, by glamorizing someone who killed innocent people as thoughtlessly and as callously as you turn the page of your shit magazine.
Posted by rob at 3:15 PM No comments: