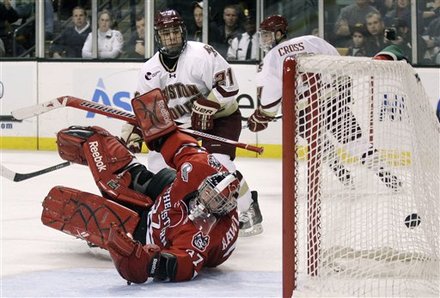 For the 5th time in the last 8 years, the Beanpot was decided with a walk-off OT goal. And for the 18th straight time, the trophy will remain on Comm Ave. Although it very nearly went to Huntington last night.

I'm a BC fan, but was hoping to see Northeastern pull off the upset. The Eagles are 1st in Hockey East, #1 in the country, have won 3 of the last 4 Beanpots, et cetera. The Huskies are 6th in Hockey East, with an 8-8-5 conference record, they're unranked, and haven't won a Beanpot since the Berlin Wall came down. It's hard not to root for the plucky underdog.

You do have to sit back and look at how good BC is, though. They didn't play a very good game defensively. They made some stupid mistakes early, especially in the penalty department. They're penalty-killing was uncharacteristically feeble (they entered with a 91% PK rate, yet allowed 2 power-play goals). And goalie John Muse was Swiss cheese, only stopping 21 of 27 shots.

But they overcame all that. They're so relentlessly skilled. All 12 forwards can skate, pass, and shoot. I hope the Bruins front office saw this game and took a few notes.

The winner of the Beanpot has gone on to be NCAA Champions for 3 straight years now. BC has a very good chance to make it 4.