MARCO STURM IS STILL A BRUIN

The Bruins have come out and announced that despite asking Sturm to waive his no trade clause, and despite talking trade with other teams out there, Marco Sturm is still a member of the Boston Bruins.

Here's what happens. Someone hears something, perhaps a leak from the teams involved, about being very near to trading people. This "source" then conveys the info as a rumor to a "reporter." The reporter passes it along to his news "outlet" as a "report of a trade," not an actual trade, just a report. The "outlet" then uses words like "reportedly," or "sources say."

Then it hits the internet and sports radio. It's never been confirmed or announced as an official fact. It's just a report of a rumor that might be close to being a fact. But people like me (I would have written about it if I didn't have to go to work) report it as a fact, give our opinions on the deal, et cetera. Soon, so many people are reporting this rumor, that it feels like a solid fact. Newspapers write stories on their sites, ESPN, TSN, Yahoo Sports, Fox Sports, everyone has the story.

But it's still a trade in the works, not a done deal. Actually, it seems to be a trade that died. It's pretty clear that the Bruins are actively shopping Sturm. And it's highly likely he won't be wearing a Bruins uniform when he returns from his injuries. But right now, he's still a member of the Bruins.

It's a shame, because he's one of my favorite players. And I'd love to see him and Seguin together on a speed line. But even if he does get shipped somewhere, my Marco Sturm German Olympic jersey will remain my favorite jersey.

BRUINS BUILD THE FIRST SNOWMAN OF THE YEAR 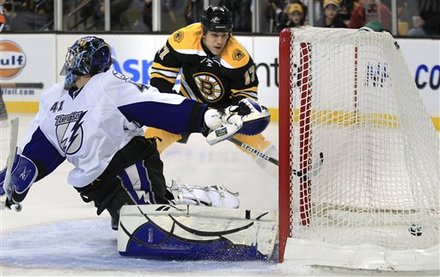 I'm going to begin my recap of an 8-1 victory by discussing goaltending and defense. Yes, I really am.

This wasn't one of those "closer than the score" games, the 8-1 fits because the Bruins utterly dominated, and it all started in the defensive zone. Remember, this was a 1-0 game 19 minutes in, and a 3-1 game 37 minutes in.

It's time for me to gushl over Tim Thomas again. He stopped 37 shots tonight. Many of those came early (15 saves in the 1st) before the game was decided. He just sees the puck so well, even in traffic. His puck vision really impresses me. If Whitey Bulger dressed up as a hockey puck, Tim Thomas would find him in 17 minutes. 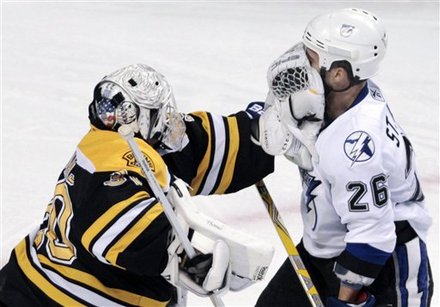 Now to the defense, who were the real story in this game. Zdeno Chara was on Stamkos like a second jersey. Not only that, his stick-positioning all night was superb, and he cracked a few skulls early on. Seidenberg, Boychuk, and Stuart all had flawless defensive performances. Ference and McQuaid were no slouches either. 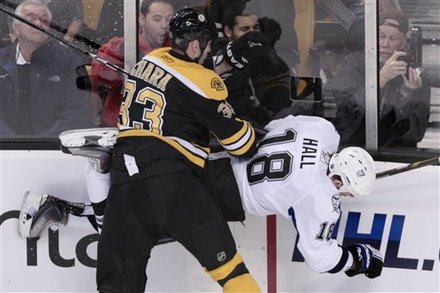 When the Bruins got the big lead, the defense didn't yield any easy plays. And that's what allowed the score to inflate up to 8-1.

Marc Savard returned, and although he wasn't on his A-Game, he and Krejci's sudden reappearance must bring some comfort to the team, as players resume their regular duties. Bergeron goes from a #1 center to a #3, and more situational center. Blake Wheeler doesn't have to be a center at all. Seguin can log some time on the wings. Jordan Caron can log some time as a healthy scratch. 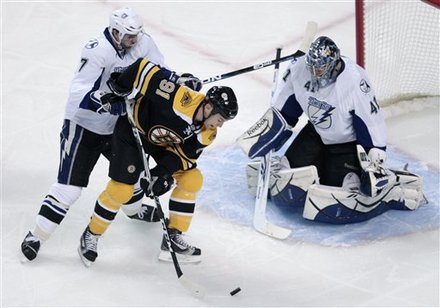 Krejci's return has reignited the top line. 3 goals and 6 points from Lucic-Krejci-Horton last night. Both Krejci and Horton were +4. They understand each other so well, it's as if they've been playing together for years, not months.

Speaking of returns, the relatively unheralded return of Johnny Boychuk in mid-November has bolstered the Bruins' defense. He's as physical as Stuart, makes great decisions, is good with the puck, and can really bomb it from the blue-line.

How cool was Seidenberg's goal? 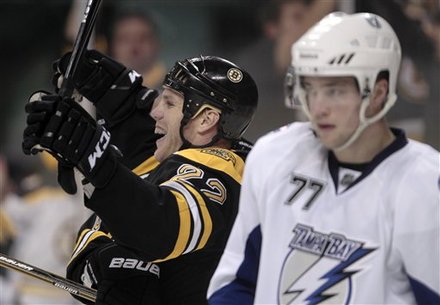 And you can say that Thornton's goal was a gift, and it was. And Seidenberg's, although clever, was also a goaltender miscue. Recchi's goal featured some beneficial bounces, and Krejci's second was slightly deflected. Blah blah blah.

The Bruins put themselves in good positions all night. Their defense shut down a prolific Tampa Bay offense, their counter-attack was executed well, and they didn't make many mistakes. Some Lightning errors may have let the score reach 8-1 instead of 3-1 or 4-1, but Tampa Bay NEVER stood a chance in this game after the 1st period. Not even close.

I loved the intensity that the Bruins came out with. Starting the game with the Thornton line was a nice touch.

However, it's difficult to maintain that level of intensity for 82 games. They need to find a middle-ground between last night's sheer ferocity, and some of their lackadaisical efforts in November.

But hey, I'll take it. Bruins play the Leafs in Toronto on Saturday night.