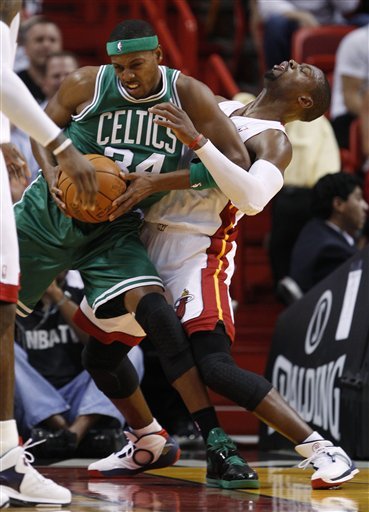 All the hype around Miami, and they just can't get rolling. I'm sure they will, and I doubt they'll endure many more 1-3 stretches, and there's no way they'll remain the 3rd place team in the Southeast Division. But remember when KG and Ray Allen began their Celtics careers? The C's started 07-08 winning 29 of 32 games.

Because the Celtics were a team. The Big Three were mature, and all united with a single goal, and all working under Doc Rivers with a plan to achieve it. The Heat are still working things out. They don't have Doc Rivers. They don't have the leadership of Garnett or Pierce, or the freakish health of Ray Allen. They have Gatorade commercials and jersey sales.

The Celtics got maximum contributions from several sources last night. Ray Allen had a ridiculous night, hitting 7 of 9 three point attempts, finishing with 35. Pierce had 25, and Garnett added 16 plus 13 rebounds. Rondo had 16 assists (he's averaging 14.8). Shaq had 7 rebounds, Glen Davis had 9, and Nate Robinson scored 12 points.

But, it's very clear that the Heat were grotesquely overhyped. On ESPN.com's NBA page, in between links to "Teams" and "Players," there's a link for the "Heat Index," an entire section of the site dedicated to the preseason #1 Miami Heat. ESPN is ball-washing a 5-4 team.

The 7-2 Celtics are in Memphis tomorrow night. 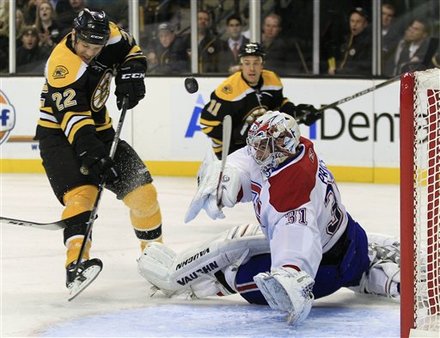 Until Montreal's 3rd goal, I was going to applaud the Bruins for playing a decent, though not great, game. They were coming off a big comeback win the night before, were up against a good team, and the refs were apparently born in Trois-Rivieres, Quebec. They didn't play bad enough to lose, though they weren't good enough to win either. I felt like they deserved a point, but certainly not two. But in the end, they got none.

The Bruins needed Rask to be nearly perfect, and he wasn't. On the first goal, Subban found a gap between Rask's side and the post. And Gomez's goal came off a juicy rebound, which Rask repeatedly gave up all night. Rask wasn't bad, but he wasn't great. I don't like his style, I don't like how small he is, and I cringe whenever he handles the puck.

Plus/minus is not a stat to take too literally, but in the case of Mark Stuart, it's very telling. It seems like Stuart is always "involved" when the opponent scores. Last night, he misplayed a breakaway, which eventually resulted in Gomez's goal. His +/- is at -1, which doesn't seem horrible until you look at all the other Bruins' defensemen, and their +/-. Chara is +5. Hunwick is +6. Ference is +6. Seidenberg is +5. Boychuk was +3 when he got hurt. Even Adam McQuaid is +1.

I love how physical Mark Stuart is. But technically, he is a mediocre defenseman at best. The Bruins need to shed some salary. I think they could get decent value if they traded Stuart.

After Montreal scored their 3rd goal, the Bruins gave up. That's too bad. I'd like to see this team string together 5 good periods of hockey in a row. Then try to string together 10. They were on the verge of reaching 4 solid periods, until they quit in the middle of the 3rd.

I'm not very impressed by Montreal, though. So that's something. The Bruins host the Senators Saturday night.