Kevin, You Kill Us 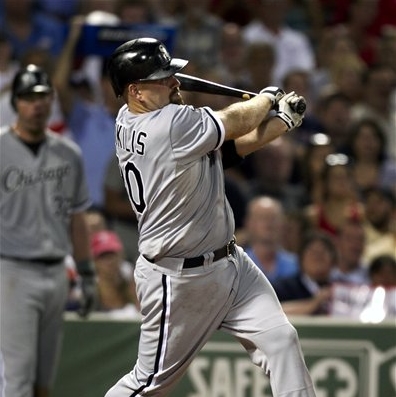 I know that the words "ego" and "Bobby Valentine" have likely never been used in the same sentence before. Valentine is, after all, one of the least macho, least egotistical, least arrogant managers in the game. So I'm sure his decision for Lester to pitch to Kevin Youkilis with first base open in the 4th was based entirely on logic, and not on a desire to prove himself superior to the player he called out in April.

Whatever the baseball logic or Freudian psychoanalytical reasons behind allowing Lester to pitch to Youkilis, the simple fact is Lester pitched, Youkilis swung, hit the ball, and it went a long way. Youkilis executed, Lester didn't.

And Jon Lester hasn't executed much at all this season. He fully deserves his 5-7 record. He's failed to go 5 innings 4 times this year. He only failed to do so 3 times last year.

Monday night Aaron Cook gave the Red Sox a great start. And Adrian Gonzalez finally came through in the clutch. And I had a glimmer of hope that if the second-tier guys like Cook continue to perform, and the big-name talent like Gonzalez can contribute, the Sox have a good chance. Well Lester is one of those big-name talents. He isn't contributing much, though.

The Red Sox are 7-12 when Lester starts. If they were just 10-9 in those games, they'd be leading the Wild Card race.

Why can't we have more Aaron Cooks and fewer Jon Lesters?

The Sox had a chance to secure at least a 2-2 split in this series. Instead, it was just another wasted opportunity for the Red Sox.

Felix Doubront takes the mound tonight. He faces Pedro Hernandez, who is making his Major League debut. Hernandez is a lefty and the Red Sox have no experience facing him. That usually doesn't bode well.