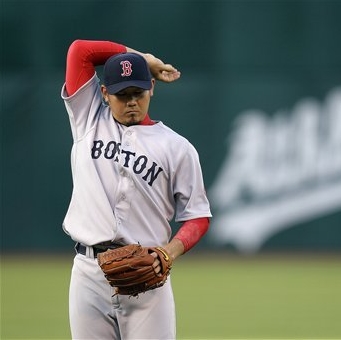 On the bright side, Daisuke Matsuzaka's painful performance (both for him and for Sox fans) allowed many in New England to fall asleep at a normal hour.

In the second inning, Daisuke threw 17 pitches. 10 were balls. 3 were struck as hits (a single, a double, a homerun), 2 were foul, and 2 were strikes. Bobby Valentine mercifully pulled him out of the game.

This game was one of the worst I've ever seen him pitch. He was fooling no-one. Even the Mariners would have scored off him. Carl Crawford would have hit him. Adrian Gonzalez would have knocked him around, even in clutch situations.

Daisuke's supporters always use the win-loss argument. Well, he's 0-3 now. With a nearly evil ERA of 6.65.

The word is that he's had neck stiffness. He's had it throughout his rehab but has usually been able to pitch through it. But after this debacle, he might be placed on the DL.

Daisuke's dreadful outing overshadows how feeble the Red Sox offense was last night and has been in the Pacific Time Zone. They've scored 10 runs in the last 5 games. Before coming out West, they were scoring in bunches. That's been the story all year long with this lineup: flood or drought, feast or famine.

6 hits last night, 5 of them singles. 1 for 6 with runners in scoring position. Ortiz and Gonzalez each grounded into a double play. The Sox made Sean Doolittle look amazing. He threw 2.1 perfect innings of relief.

The good news is that Jon Lester is on the mound tonight. Before the season, Lester got all pissy because he wasn't considered "elite." Well here's yet another chance for you to demonstrate your elitiness, Mr. Lester. The Sox are on a 2-3 slide, last night's starter got shelled, the offense is struggling, and the team needs something special from you to help them turn the tide.

He faces Bartolo Colon, who is 6-7 with a 4.22 ERA. Colon has been very inconsistent this season. For instance, in April he was 2-2 with a 2.86 ERA. In May he was 1-3 with a 7.92 ERA. An inconsistent starting pitcher against an inconsistent offense. The Sox will either score less than 3 or more than 10.