Four Reasons Why the Bruins Scored 4 and Won Game 4 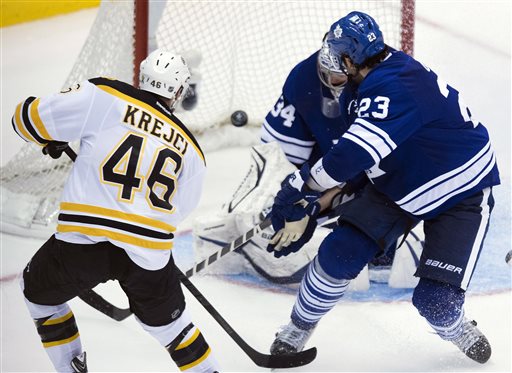 There were four main reasons the Bruins won Game 4 (by scoring 4 goals and winning in the 4th period).

#1: Tuukka Rask
He was unreal. He was clutch. He stopped 45 of 48 shots. He was the Bruins' best penalty-killer. And his toughest saves came when the game could have dramatically changed. This was quite possibly the best playoff performance of his career. He was aggressive, but his play was less chaotic than it's been in previous games in this series.

#2: David Krejci
I'm not the biggest Krejci fan. But he knows how to bring it in big games. He's like the Rajon Rondo of the Bruins. When the spotlight is on him, he digs deep and finds another level of play. His hat-trick last night gives him 5 goals, which leads all players in the playoffs. So do his 10 points.

One thing that I think helps him is when Horton and Lucic show up and do work every night. Then he can do his thing, they do theirs, and the whole line functions the way it's supposed to.

#3: Special Teams
The Bruins scored 2 power play goals. They killed all 4 Toronto power plays. Their +2 margin in special teams play was literally the difference between winning and losing. In hard fought, closely contested playoff games like this one, special teams often decides the victor. Having a solid PK and a power play unit that can score timely goals is such a tremendous asset in a playoff series.

#4 Zdeno Chara
Perhaps overshadowed Rask's 45 saves and Krejci's hat-trick is Chara's 4 point night. He assisted on each goal. Not bad for a guy who also played 47 shifts for over 33 minutes.

During the regular season Chara didn't have the offensive output we've seen from him in years past. Especially on the power play (only 4 PP points). Last night he reminded us that not only is he a dominant defensive force, he has the offensive skills too.

This was obviously a huge win for the Bruins. It's so much different to come home up 3-1 compared to tied at 2-2. Being at 2-2 would have felt like being behind in this series. Reimer must be swimming in doubt. And his teammates can't feel too confident in him. That could lead to players like Kessel pushing too hard to score goals, and making big mistakes.

It's time to finish this team. They're demoralized. They're facing elimination. They're on the edge of the proverbial cliff. Time to give them a push.