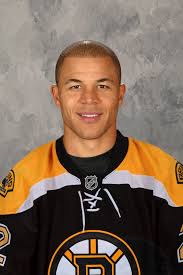 The Bruins finally got Jarome Iginla. They had been pursuing Daniel Alfredsson, but the Red Wings secured the Swede for a 1-year $5.5 million bounty. So just like Jaromir Jagr was the silver medal when Peter Chiarelli failed to get Iginla at the deadline, Iginla is now the silver medal after pursuing Alfredsson.

Iginla will have a base salary of $1.8 million, with up to $4.2 million more incentives. It's a 1-year deal. Similar to Alfredsson, Iginla is a veteran that is looking for a Cup.

The guy has scored 30+ goals for 11 straight seasons. And with the departure of Horton and Seguin, the Bruins desperately need wingers. Wingers who can score.

The Bruins have 6 legitimate top-6 forwards. Krejci and Bergeron are excellent centers, you hang on to Lucic and Marchand, you add Eriksson and Iginla. It isn't a bad top-6 at all.

There's been a lot of movement in the NHL, thanks to the salary cap. Which means that while this off-season has been more interesting, it also means that fans must re-learn their teams rosters once the regular season starts. It also means that successful big market teams like Boston and Chicago can't retain the talent that they've developed. And that's bad for the NHL. The TV ratings were great for the 2013 Finals because two big markets that cared about hockey were involved.

Seguin and Horton were both popular players in Boston. Local stars. People bought their t-shirts, both from the Pro Shop and from street vendors.

Location, location, location. Seguin and Horton were stars in Boston. But because of the cap they need to be shipped elsewhere, where teams do poorly and nobody cares about hockey.

The salary cap is intended to prevent big market teams from overspending and pricing out medium/small market teams, making it difficult for the big teams to buy success. But in the NHL there are a handful of micro markets, like Phoenix and Miami, that lower the cap number for everyone, and also absorb talented NHL players that would draw a crowd (and TV ratings) in hockey-interested markets.

The NHL's biggest strength since the '04-'05 lockout has been the success of teams in big markets and in hockey-interested markets. LA, Chicago, Boston, Detroit, Pittsburgh, Philadelphia, Toronto, New York. However, the NHL has developed a system that focuses on putting dying franchises on life support, in markets that cannot support them, at the expense of teams that succeed.

It's like having a popular, successful restaurant in downtown Boston, then not allowing them to pay their best cooks and servers, and sending those quality employees to some crappy diner nobody goes to in north Texas or central Ohio. 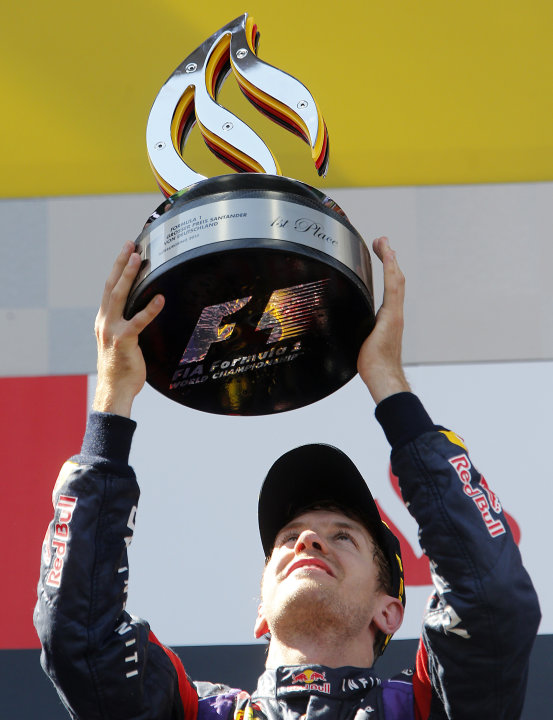 All is well in the world. A Limey has won Wimbledon and a Kraut has won at the Nürburgring.

Do you see what happens when tires are only part of the storyline and not the entire story? We get a close race that goes down to the wire, and we get the best car and the best driver winning. Sebastian Vettel finally won his home Grand Prix, edging Kimi Raikkonen and Romain Grosjean for an all-Renault powered podium. Vettel added to his lead over Fernando Alonso, who finished 4th in the F138 Ferrari.

I'm getting a sense of deja vu. It's like the season is starting over again. And in a way that's true with the new/old tire construction making a debut Sunday. It's like we're back in Melbourne. Mercedes are once again struggling to convert great qualifying performances into great race performances. And Lotus are incredibly strong, just as they were before Monaco. One constant is what Vettel and Red Bull are doing.

It's really special to watch, and I feel as though some of the critics are missing out. Those who claim Vettel is lucky or argue that the car is responsible for the success of the driver are failing to appreciate how remarkable the combination has worked, over and over and over, from Grand Prix to Grand Prix, from qualifying to raceday.

Look at the other teams. All of them fluctuate up and down, having a few good races, a few bad ones. Lotus looked very sharp yesterday, yet they are 4th in the constructors' standings because of their inconsistency. Mercedes are second in the standings but struggled yesterday, and also struggled before their covert Pirelli test. Ferrari are closing in on Mercedes, but even Alonso admits that they've lost significant pace. And McLaren are in 6th, their 12 point combined performance yesterday was their BEST of the season.

There's parity in the other F1 teams. Mercedes look good for 3 races, then Lotus charges toward the front, then Ferrari dazzles with a few strong performances. The only team that remains steadily strong is Red Bull. And instead of trying to find fault with that, and instead of harboring hope that heroic matador Fernando Alonso slays the bull (as NBC Sport's Will Buxton and Steve Matchett seem eager to see, every week trying to map out a way for Alonso to win despite his car's inadequacies), just sit back and appreciate the heights being reached by this driver and this team. 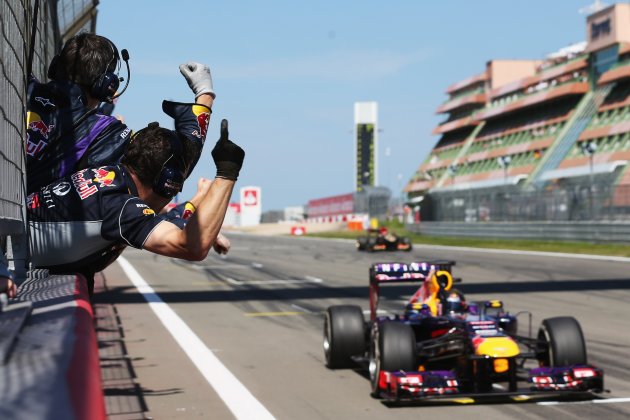 We're witnessing Formula 1 history being written by this 26-year old driver and this team which is in its 9th season. It's incredible to behold. This was his 30th win, only 1 shy of tying Nigel Mansell for 5th all-time, 2 behind Alonso for 4th. His 27.27% win rate is better than Prost, Senna, and Stewart.

A few side thoughts from yesterday's race:

I'm glad the cameraman struck by Mark Webber's tire is okay. He suffered some broken ribs, a broken collarbone, and a concussion. After the death of a marshal in Canada, I'm glad Formula 1 isn't adding to their list of track worker fatalities. These men and women working the race assume a significant amount of risk, with a relatively slim slice of the glitz, glamour, and glory pie that F1 brings to town. Red Bull were fined 30,000 Euros for the unsafe release, rightfully so.

Felipe Massa might have cashed his check with Ferrari. He attributed his spinout to his own error, then claimed he couldn't get the car back in gear. This is his latest race-ending incident of the season. He's only scored 12 points in the last 4 races. How interesting will the silly season be if there are open seats at Red Bull AND Ferrari? And with McLaren's struggles, don't rule out there being a vacancy in Woking as well.

This wasn't a typical Vettel yawnfest. He had to sweat for this one. I couldn't help but be reminded of another German driver. One of Michael Schumacher's most impressive attributes was his ability to respond to the gauntlets laid down by his opponents. Vettel did this yesterday. He pushed as hard as he needed to push, when he needed to push, and he never gave Grosjean or Raikonnen an opportunity to pass him. His ability to find that extra tenth of a second when it mattered most was very Schumacherian.

The Hungarian Grand Prix is an agonizing 3 weeks away. Vettel has never won that event. With 3 weeks I'm sure the teams challenging Vettel and Red Bull will have analyzed themselves and there will be more reshuffling from 2nd place back. But not at the front. At this point in F1 history, how can you pick anyone but Vettel to win?

No more "Thank you, Kessel" chants at the TD Garden. The brief Tyler Seguin era in Boston is over. He, Rich Peverley, and Ryan Button were sent to Dallas for Loui Eriksson and 3 prospects. And I can't say I'm a big fan of the deal. Although I understand it.

The Bruins make cap space for themselves in this deal, about $4 million. Which they need in order to pay Tuukka Rask and Patrice Bergeron. And they need that cap room because they gave Chris Kelly and Rich Peverley too much money. I don't think the Stars wanted Peverley (6 goals and 12 assists last year). He was a throw-in, with his $3.25 million salary cap hit.

I don't think this has much to do with Seguin partying or his attitude. He's a famous 21-year old NHL star in a hockey city, he's going to screw around. Maybe he pushed the partying a bit much, I don't know. You know who else doesn't know? The media. The media depends on Twitter and third-hand accounts to piece together what these athletes do in their social lives. Instead of just going to a bar where Seguin and his friends go, and doing first-hand journalism.

We have a tradition here in Boston when an athlete departs a team in a confounding way: there are stories told about the behind the scenes reasons for him to go. There are all sorts of stories flying around about Seguin's personal life irritating the Bruins' front office. The most salacious being that Seguin was locked in his hotel room during the playoffs, under guard to make sure he didn't leave that room. Which is probably a twisted fact. The Bruins stayed in a hotel in Boston during the playoffs, and I'm sure there were security guards in their section of the hotel, which is a standard practice when teams stay at hotels, at home and on the road.

I can't say I'm excited about losing Seguin. And I'm not excited at all about gaining Eriksson. Eriksson's ceiling for production seems to be between 25 and 30 goals. Seguin's ceiling is much higher. Eriksson is also 6 years older.

Seguin hasn't produced in the way we've expected him to, especially in the playoffs. Then again he's 21-years old. His tenure with the Bruins has always been focused on learning defense. And he bought into that defensive mindset and changed positions because of that. I would have preferred Seguin have another season here, a full season without a Swiss Lockout vacation, a full season to prove he wanted to take things seriously and take that next step as a scorer.

And here's why. Some might argue that the Bruins were on the verge of a Stanley Cup without Seguin producing. And that's true. So maybe the B's don't need him. Then again, had Seguin produced in the Finals, the Bruins win the Cup. Two timely goals in the Finals from Seguin and there's a parade not a trade.

So the Bruins didn't need Seguin to do well for the team to do well. But if he had done well, they would have won it all. He has the talent and the capability to be an over-the-top kind of player.

I do wish the Bruins had been more careful with their 3rd line contracts. As good as Kelly and Peverley were in 2011, that type of player is easy to replace at a bargain rate. The type of player Seguin could be is not easily replaced. And the Bruins are paying for their generosity to those 3rd liners by giving up a potential 40+ goal scorer.
Posted by rob at 10:00 AM No comments: