I doubt this deal will happen or is even being seriously discussed by the Red Sox and Royals. Nevertheless, it's a cold and wet Tuesday with little else happening, so let's discuss the potential deal.

Firstly, both these players annoy me with how they spell their names. Wil Myers's full name is William Myers. What did he do with that extra 'L?' And do his friends call him "Bil" or "Wily?" I find his name to be sily.

If this move exists, which it doesn't, the Sox should do it. Jon Lester is what he is. He's at best a 2/3 type of starter. He never took that step forward to being an Ace, and instead took several steps backward last season. His greatest strength, before last season, was his dependability. And now that's gone.

How important is Jon Lester to the long-term (next 5 years) success of this team? I don't think he's exceptionally valuable. I also think replacing him (even upgrading from him) isn't difficult.

Wil Myers is a prospect with tremendous upside and great minor league numbers (he hit 37 HRs in AA and AAA last year, with a .304 AAA average, .378 OBP, and .554 SLG). He has no Major League experience, and prospects are never guaranteed, but he's got the potential.

He could be an All-Star caliber player for 15 years to come. He can play the outfield and third base so it's easy for him to make his way into a lineup.

And perhaps most importantly, he could help the Red Sox acquire the Ace they covet. With Myers, the Red Sox can offer a trade package much more tantalizing to bad teams that have great pitchers.

So the Sox should pull the trigger on this nonexistent gun.

The deal doesn't make much sense for KC, though. They'd get Lester for one year and pay him $13 million. Then he'd hit free agency. Why would a small market team give up a blue chip prospect to rent a mediocre pitcher?
Posted by rob at 1:45 PM No comments: 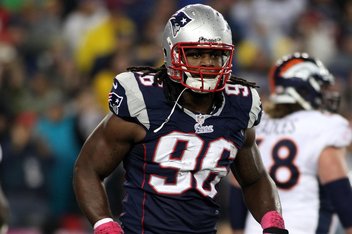 The Patriots will lose the services of Jermaine Cunningham for 4 games. He was suspended by the NFL for an unspecified violation of banned substance policies blah blah blah. He took something illegal, got caught, now he's got 4 weeks off.

This was part of a wave of PED suspensions announced by the League. Many of them for adderall. I'm glad Ithaca College didn't make their students take piss tests because I wouldn't have passed Modern Western Civilization without adderall.

Maybe they'll put an asterisk on my transcript.
Posted by rob at 10:00 AM No comments: