Disclaimer: this post contains numerous references to the works of William Shakespeare. If unfamiliar with said works, you will not get the jokes. And I really don't care that you don't get them.

Yes, that's Eddie George playing Julius Caesar. The Heisman winner and former Tennessee Titan is appearing as the title character in the Nashville Shakespeare Festival's production of Julius Caesar. I have to say it's a pretty smart move for the production. Good or bad, having Eddie George on the stage will sell tickets and create a buzz. And Eddie George seems like the type that would enjoy the unique experience.

Eddie George's post-NFL career has been busy and positive, which is refreshing. He's opened restaurants in Nashville, and Columbus, OH. He's all over television with appearances on reality shows and his own show on the Big Ten Network. And he's earned his MBA at Northwestern.

But his latest endeavor sparked a thought in my mind. What other Heisman winners could play characters from Shakespeare?

Doug Flutie would be a good Puck, a diminutive elf always up to mischief. Eric Crouch's confused indecision could make him a decent Hamlet. "To play safety for the Rams or not to play safety for the Rams?" Shylock's greed would suit Reggie Bush. Ricky Williams' decadence makes him a perfect John Falstaff. The religious Tim Tebow could play Angelo from Measure for Measure. I can't decide if OJ Simpson would be better as Othello or Brutus. Either way, I'm sure he'd give a killer performance. 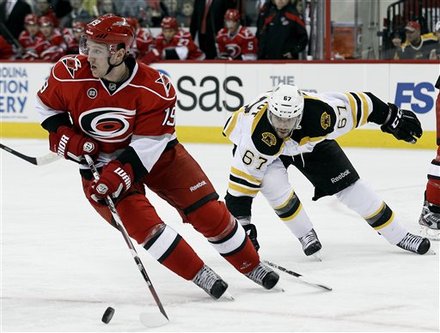 The Bruins have dominated most of the Eastern Conference this season, going 11-2-0 within the Northeast Division, and 6-1-0 against the Atlantic. But the Southeast has given them problems. The B's were 4-4-0 against that division before starting this trip.

The Hurricanes have been the most troublesome, even though they're struggling to stay in the playoff picture. They beat the Bruins twice earlier in the year, and completed the hat-trick on Saturday night.

The Canes are fast. The Bruins struggle against such speed. It's not that they can't keep up, it's that they underestimate how quickly these fast opponents can close passing lanes, get to loose pucks, and make plays.

On Saturday, for instance, Gregory Campbell thought he had all the time and space in the world to skate with the puck in his own defensive zone. A fast Hurricane caught up to him, took the puck, and eventually the puck found its way into the net.

In that same game, the B's frequently panicked in their own zone and flicked the puck into space. That's rarely a good thing to do, and it's even worse when facing a speedy opponent who will inevitably get to that loose puck first and make a play.

Ultimately, the Hurricanes outworked the Bruins. The B's were a bit too comfortable, a bit too complacent, and Carolina didn't ease up and let them come back and win it in the 3rd.

The Bruins rarely lose a 3rd period, but they did Saturday night in Raleigh. So I expected to see them come out firing in the 1st last night. They didn't disappoint. Bergeron scored 80 seconds after the puck dropped.

Then more bad habits reappeared kept the game interesting. The Bruins struggled with their entry, frequently losing possession at their offensive blue-line. If not for Rask bailing them out, this game could have been ugly.

Krejci, Seguin, and Bergeron eventually gave the Bruins a lead on a 5-on-3. Krejci won a puck battle, then Seguin circumnavigated the entire zone. It was refreshing to see the Bruins moving bodies on the Power Play, not just playing connect the dots by standing still and passing the puck around. Seguin's shot/pass was adeptly tipped in by Bergeron, who was unnoticed lurking in the slot while the Panthers were mesmerized by Seguin's orbit.

But the lead was short-lived. Florida scored on a post-PP breakaway. And if it weren't for Rask, the Bruins might have lost this game in the 3rd.

Rask kept them in the game with 38 stops. Krejci eventually scored the shootout winner. So while officially his point-streak is over, he still won the game by shooting the puck into the net. Odd how that works out.

The Bruins play the Lightning tonight. Tampa Bay are dead last in the Southeast and have allowed more goals than any team in the NHL. 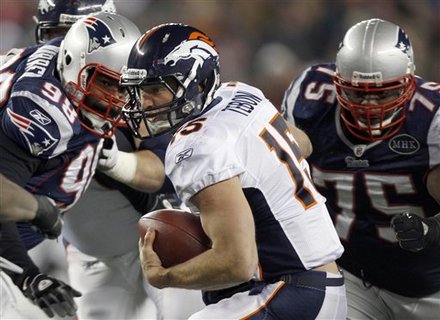 I tried finding an appropriate 3:63 Bible verse (Brady threw for 363 yards), and the best I could find was: Look at them! Sitting or standing, they mock me in their songs. (Lamentations 3:63). And maybe that can be about how much hype Tim Tebow got leading up to this game, and how much people forgot that Tom Brady is a pretty good QB.

Brady was nearly perfect. His one interception was the only blemish on his performance. 5 touchdowns in the first half, 6 overall. He completed over 3/4 of his passes. He had fewer incompletions (8) than Tebow had completions (9). 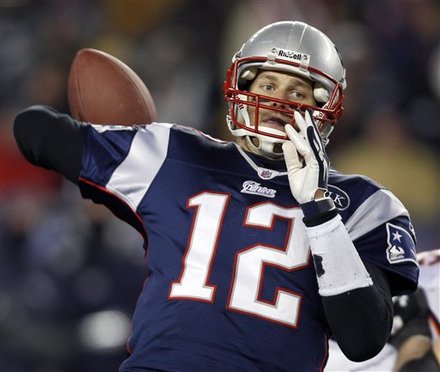 One amazing stat struck me. The Patriots were 3 of 6 on 3rd down. What amazes me is that the Patriots got to 3rd down only 6 times. They got 31 first downs. That means that 25 times they didn't even get to 3rd down before getting a new 1st down (they got 3 1st downs from penalties). In other words, even if the Pats had been playing with CFL rules and only getting 3 downs per series, they'd have still moved the chains with regularity.

The line protected Brady all night. 0 sacks. That was a huge reason for Brady's monster stats. When Brady did have some pressure on him, he wasn't able to fully step into his throws, and that's the only time the Patriots' drives sputtered and stalled. For the most part, though, the line gave him time to find open receivers, and space to step into throws.

If not for Brady, Aaron Hernandez would have been the clear star of the game. He caught 4 passes for 55 yards and a TD. He ran for 61 yards. And he had a tackle. That's a diverse night. He left the game early but all reports say that he's alright.

Using him as a runningback was ingenious in its simplicity. When an opponent sees no RBs in the Patriots' huddle, they might go with a lighter personnel package with more DBs, and fewer big guys up front. Then Hernandez lines up in the backfield and the Pats run the ball against a defense designed to stop the pass. So simple, which is why it's so smart.

Hernandez did lose a handle on the ball twice, which makes me nervous. He juggled an exchange from Brady, and lost a ball after being downed by contact. His ball control isn't 100%. He's not Tiki Barber in the early 2000s, but it's something to note.

Gronkowski should endorse a line of vacuum cleaners. Everything that enters his airspace gets sucked in. Bibi Jones can be in the commercials with him for similar reasons. 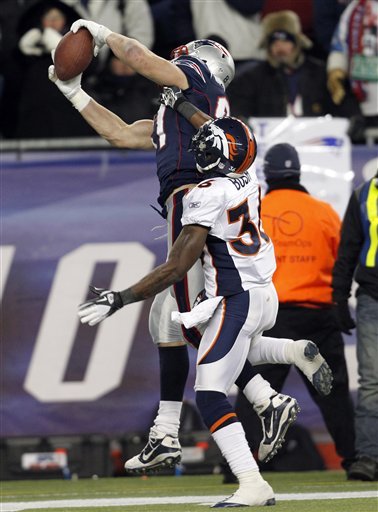 The defense did well. The only touchdown they allowed came when the Broncos got the ball on the Pats' 24. But let's not compare this unit to 2003 and 2004. The Patriots' offense shot out to a big lead, and the Broncos have one of the worst passers in the NFL. When down by two touchdowns, simply not throwing interceptions isn't good enough.

How do you stop Tebow from his miraculous 4th quarter comebackes? You start the 4th quarter with a 42-10 lead.

The Patriots demonstrated why the option is not a viable NFL offense. Defenses are too fast for the backs to turn the corner. And they're too disciplined and coached too well to make mistakes. They know their assignments and containments.

The Pats' D-line got excellent penetration up the middle, as well as even pressure on each flank. That prevented Tebow from rolling out, which is when he's most dangerous. It also meant that when the Broncos ran the option, they couldn't cut back because Wilfork was already through the line and chasing the play from behind. Tebow was sacked 5 times, the Pats had 10 tackles for a loss, plus that 1st quarter strip-sack.

The Pats played much better than they've played in their past two postseasons. There were no fake punts. In fact the Patriots' special teams executed very well. There were a few mistakes, but they were quickly atoned for.

The Pats face the Ravens next week. The other two offensive juggernauts - the Saints and Packers - are out. The Pats are unique among the NFL's final four. Which means either that they're the best of the offense-heavy teams, or were fortunate to play the Denver Broncos.

How weird is this? The Pats are in the AFC Championship and they still haven't beaten a team with a winning record.