You have to love the security guy getting cheered as he returns to his post. Perfect form on that tackle.
Posted by rob at 1:28 PM No comments: 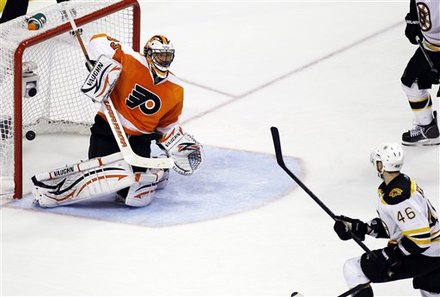 #46 may have scored the game-winner, but it was the 46 straight saves made by Tim Thomas that truly won this game for the Bruins. The Flyers dominated the 3rd period and the Overtime, outshooting the Bruins 32-12 in that span. But Thomas was impenetrable. Finally, a miscue by Kimmo Timonen, plus plenty of open ice because half of each team was changing, gives Krejci the chance to win the game. And it was a perfectly placed shot.

Krejci and Thomas were obviously the stars of the game, but let's not forget Dennis Seidenberg. He was a well deserved +3, on the ice for all three of the Bruins' goals. In Game 1, he made an impact on offense. Last night, he made an impact on defense. So many big clears, poke checks, hits, battles won. He's +7 in this series, and there's a reason for that.

Krejci has been producing. As are the 2nd and 3rd lines, which each provided a goal last night. Horton's been an OT hero. Now, if only we could find Milan Lucic. Where is he? It's been 9 playoff games without a goal. And he ended the regular season riding a 10 game scoreless streak. 6 assists in his last 18 games. And it's not as if he's focusing on his physical game, either. He's just a ghost on the ice. He was out there for 24 minutes. I noticed him for maybe 24 seconds.

And the Power Play is just sad to watch. Marchand scored his goal because he moved around, opening a passing lane for Bergeron to find. The Bruins' forwards need to move around, not just shift within their little zones of operation. Especially since the Flyers are focused on taking away the points. Sending Recchi or Bergeron up to the high slot might not be a bad idea, either. It'd either create room for the forwards down low or the defensemen on the blue-line.

Then again, we didn't have Tim Thomas before. Goaltending, by itself, cannot win an entire series. But it can steal a game. Thomas stole one last night. Thankfully it wasn't played in Quebec, or the Montreal PD would be after him.

Playoff series are frequently won by the slimmest of margins. Think about where Boston would be if they didn't score 3 OT goals against Montreal. Think about one OT shot by P.K. Subban bouncing off a skate and past Thomas. The Bruins would be golfing.

This series will be determined by something like goaltending (which favors Boston) or special teams (which favors Philadelphia). At the moment, however, Tim Thomas is the difference between these two teams.