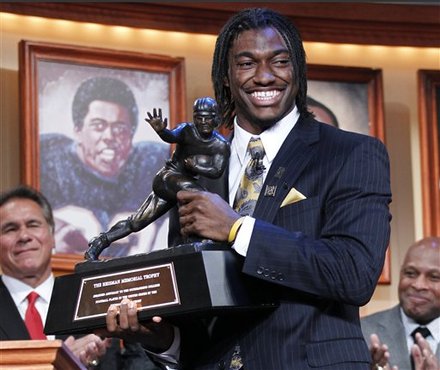 Isn't it weird that the Heisman selects 5 finalists, and the BCS selects only 2? Maybe the BCS could learn something from the Heisman.

Robert Griffin III won the Heisman, by a significant margin over Andrew Luck, who finished 2nd for the second straight year. RG3 is Baylor's first Heisman winner, despite Baylor losing 3 games. Griffin won because of his "wow factor." He was by far the most electrifying of the potential winners.

Half his TD passes were for 35+ yards. He was the entire Baylor offense, and essentially the entire Baylor team. He won shootout games with his arm and with his legs. When Baylor was on TV, you had to watch, regardless of the opponent or score.

Andrew Luck is the best NFL prospect precisely because he's not as exciting. He's consistent, solid, mistake-free. He surgically dissects opposing defenses. RG3, on the other hand, slices and slashes through opposing defenses with a chainsaw.

Trent Richardson was as solid, dependable, and relentlessly powerful as you'd expect an Alabama runningback to be. He did his job, and did it well, scoring 20 TDs against notoriously stingy SEC defenses. He was the most productive offensive player on a team playing for a National Championship. He was a workhorse. But workhorses aren't as exciting as racing thoroughbreds. And that's what RG3 was.

Montee Ball was like Richardson, only he wasn't as well known at the start of the season, and didn't play for as good of a team. His 38 touchdowns weren't just against weak competition. He scored in every single game. He had four games with 4 TDs. He also had wide highways to run through thanks to Wisconsin's line. Ball entered Heisman discussion a bit after RG3 did. And while 38 TDs is impressive, RG3 threw for 36, and ran for 9. Which is more exciting, a 10 yard rushing TD or a 40 yard passing TD?

Tyrann Mathieu did have some of the most exciting plays on his highlight reel. But the reel is too short. I would love to see a defensive player win the Heisman again, but it won't happen unless they return half a dozen punts for a touchdown. Mathieu was electric, but he was just a few sparks here and there, while RG3 was a raging inferno every week.

So Griffin III won the Heisman. He's a junior. He might stay at Baylor and try to make a BCS Bowl. He might enter the Draft. If I were an NFL GM, I'd take Luck first, but I wouldn't complain about being "stuck" with Robert Griffin III.

B's Get W From CBJ's 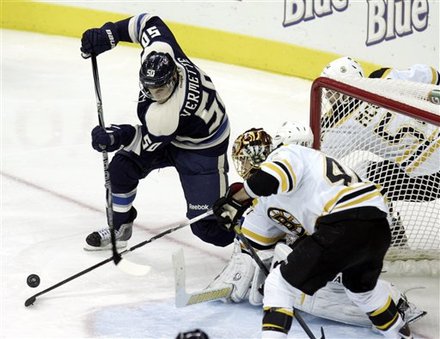 It wasn't a boring game, that's for sure. Physical. Fast. The winning team pulled its goalie. Joe Corvo scored 2 goals (2 more than he's scored in his last 31 games). Lucic was maybe the Bruins' worst player in the 1st, then their best in the 2nd. Fights. Breakaway goals. It was just a weird, wild game.

The Bruins came out on top though, in the latest example of how difficult it is to keep them pinned once they've been knocked down. Columbus was up 2-0, and the Bruins scored twice within a 45 second span to tie it. It was the 10th time this season that the B's have scored multiple goals within a minute.

Thomas got pulled for the 3rd period. He wasn't awful in the first 2, but he did seem disheviled. His movements were more frantic than usual. The breakaway goal he allowed to Umberger was very soft. His first soft goal of the season. Rask came in and was excellent. He stopped all 11 shots he faced.

Joe Corvo finally scored. His offensive contributions have been few and far between this year. And while his defense hasn't been bad, he was brought here to contribute on offense too. He's finally on the board with 2 goals.

Chara also scored. Then he hurt his leg. Word is that he'll miss three games. He's only missed 12 in the 5+ seasons he's been a Bruin. I'm very glad it doesn't seem very serious because he's the team's most valuable skater (6 goals, 13 assists, +18 against the opponents' top lines). 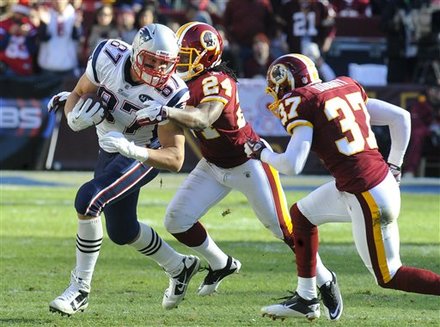 Let me start with a paragraph overreacting to the shouting match witnessed between Tom Brady and Bill O'Brien. This paragraph will sensationalize the heated discussion between the Patriots' QB and offensive coordinator. This paragraph will not mention that Brady and O'Brien were moments later seen calmly discussing things on the sideline, sitting next to each other. This paragraph will make implicating observations and comments about the chemistry in the Pats' locker room, and will end with an inflammatory question: Who really calls the offensive shots in Foxborough? Brady or O'Brien?


Now with that over with, let's discuss this game. I think all except the most foolish of fans out there realize that the Patriots defense is a joke. Slater and Edelman are getting significant playing time. There are occasional turnovers forced, but there are also big plays allowed going the other way. This defense makes bad QBs look decent, decent QBs look good, good QBs look great, and great QBs look godlike. This defense has the same effect on quarterbacks as alcohol has on women at a bar, it makes them look much better than they actually are.

Devin McCourty is awful. He would have had a pick if not for a roughing penalty, but he has looked vulnerable all season long. It's not just a sophomore slump, it's a sophomore collapse. He gets torched, he struggles to cover, and he commits penalties to compensate for his failures. Fans shouldn't be allowed to wear McCourty jerseys to games, because opposing QBs will throw footballs in their direction again and again. And that could prove dangerous to spectators.

This team wins and loses based ENTIRELY on how well its offense performs. Brady had a slow start again (8/19 in the first half), and the half ended 20-20. Then Brady played a great 3rd and the Pats took a lead. The offense could have put it away, but Brady threw that argument inciting interception. And of course, the defense almost blew the lead.

When Brady and the offense are perfect, this team cannot lose. When he's great, this team is very difficult to beat. When he's just okay or a bit off for a few series, this team kind of sucks.

Gronkowski is the second most important player on this team. He's hauled in close to half of Brady's TD catches. He is the new NFL record holder for TDs caught by a tight-end. He also passed the 1,000 yard mark in this game.

Is this team going to go deep into the playoffs? That depends completely on the offense, because the defense is going to get ripped apart.

The Pats need to play much better as they're on the road against a hot team that's leading its division. Pats @ Tebow next Sunday evening.