It's inevitable. Jason Bay will be compared to Manny Ramirez. And much like Nomar's cadre of fanatics refused to give Orlando Cabrera any credit in 2004, there will be a vocal contingent of Manny Ramirez lovers who will refuse to acknowledge any of Jason Bay's strongpoints.

Let's start with the least important aspect of the game and work up from there...

Jason Bay is a better fielder than Manny. No debate here. He has more range, and he doesn't make boneheaded blunders. He can also play center and right fields.

Now onto something 100 times more important...

Keep in mind, he's spent most of his Major League career with the Pirates. The Red Sox have scored 488 more runs than the Pirates since 2005. Bay has never had the luxury of hitting in front of a guy like Ortiz. He'll come to a Red Sox lineup with guys like Youkilis, Lowell, Pedroia, Drew, and Papi around him. And Fenway Park isn't a bad place for a right handed power hitter to call home.

Manny is obviously the better hitter of the two, but not by much. But Manny is also on the downslope of his career. He'll only get worse. Bay, on the other hand, is only going to get better. Given the advantages of the Red Sox lineup, and hitting in Fenway, who knows what kind of numbers Bay will put up. The sky is the limit.

And finally, when discussing Manny Ramirez, the category of intangibles must be brought up...

Manny Ramirez's post-season numbers cannot be ignored, especially considering Jason Bay has NO post-season numbers. Bay has never experienced a pennant race, either. And Boston isn't known for its laid back, easy to play-in atmosphere.

As I said, Jason Bay has never played in the post-season. But he's also never taken games off with fake injuries. He's never taken an at-bat off to spite the team's upper management. He's never slapped a teammate in public, nor has he pushed a team's traveling secretary. Most importantly, he's never been voted off a team.

Bay has a massive edge in this category.

Manny Ramirez is a sure bet Hall-of-Famer. But he had to go. Jason Bay has an extremely long way to go before he's even close to being on the road to Cooperstown. But considering his future potential, and the relatively positive influence he'll have on the Sox clubhouse; Jason Bay is better for the Red Sox than Manny Ramirez.

24 TAKES ON A WHOLE NEW MEANING, SOX VOTE MANNY OFF

According to WCVB's Mike Lynch, the Red Sox players had a vote last night. The question was: Should Manny Ramirez be traded. The vote was an overwhelming 24 to 1 that yes he should be traded. The lone dissenter was Manny's longtime friend and part-time spokesman David Ortiz. The Sox players told Red Sox management about their vote.

This puts a new perspective on things. The Sox players wanted him gone... badly. This means that even though the Sox are still paying Manny, had to send Hansen and Moss to Pittsburgh, and only got one player in return; this was a NECESARRY deal.

MORE DETAILS ON THE MANNY TRADE

It's official now. The Red Sox have traded Manny Ramirez, along with Craig Hansen and Brandon Moss. They receive Jason Bay in return. The Dodgers also shipped two prospects to the Pirates. The Sox also have to pick up the remainder of Manny's contract for the 2008 season.

Craig Hansen is a total bust and I don't mind losing him. But I'll miss Brandon Moss. For my money, he's a better player than Jacoby Ellsbury.

But this deal wasn't about making the Red Sox better by acquiring talent. It was about getting rid of a major problem and trying to get something in return. They got a good something back in Bay, who is younger than Manny, cheaper than Manny, and is putting up similar numbers to Manny this year.

This deal reminds me of the Nomar deal in '04. The Sox got rid of a problem, got a solid replacement in Orlando Cabrera, and went on to win the World Series. Hopefully this deal will have similar results.

Adios, Manny. We'll always have the good times, but you won't be missed.
Posted by rob at 4:48 PM 2 comments:

Tentative and sketchy reports that Manny Ramirez has been traded as part of a 3 team deal. Manny goes to the Dodgers. The Red Sox get Jason Bay. The Pirates get 4 prospects from somewhere. Again, this is all coming in right now. Information is still speculative at this point.

18 minutes ago, I reported that Jason Bay was a Tampa Bay Ray. That deal has apparently been squashed. This day has been loaded with conflicting reports, deals dying, deals rising from the dead, deals being "all but done." It's exciting, but also frustrating.
Posted by rob at 3:46 PM No comments:

MANNY BEING AN ASSHOLE 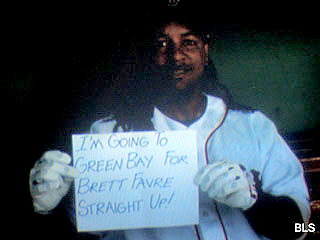 Manny continues to bitch and moan about his horrible life.

"The Red Sox don't deserve a player like me. During my years here, I've seen how they have mistreated other great players when they didn't want them to try to turn the fans against them.

"The Red Sox did the same with guys like Nomar Garciaparra and Pedro Martinez, and now they do the same with me. Their goal is to paint me as the bad guy. I love Boston fans, but the Red Sox don't deserve me. I'm not talking about money. Mental peace has no price, and I don't have peace here."

The Red Sox never did anything to paint Pedro as a bad guy. And by the time Nomar was traded, he had already done more damage to his image in Boston than the team could ever hope to achieve on its own.

There's a rumor circulating that the Red Sox are close to a three way deal that would send Jason Bay to Boston. That would be more than agreeable for me. Bay is signed until 2009, and is making $3.5M this season. He's got 22 HRs and 64 RBI (Manny has 20 and 68). Bay turns 30 in September, and is a potential long term replacement for Manny in left field. This would be a sensational deal if it gets done.

Source:
ESPN.com
Big League Stew
Posted by rob at 11:35 AM No comments: