Why the Blackhawks Worry Me

I'm glad the Bruins are in the Stanley Cup Finals so we can focus on something other than Tim Tebow.

I've heard the Blackhawks being compared to the Penguins, who were dispatched with ease by the Bruins. And I can see some surface similarities. Chicago scored almost as many goals as the Penguins in the regular season. They have big names like Kane, Sharp, Hossa, Toews. They've recently won a Cup. Et cetera.

These Blackhawks are NOT the Penguins. The Penguins had goaltender issues, the Blackhawks don't. Corey Crawford might not be a household name, but he had a 1.94 GAA and .926 save percentage in the regular season. He also had a 19-5 record. In the playoffs he has a 1.74 GAA and a .935 save percentage. Rask is at 1.75/.943 for comparison.

The Blackhawks do not depend on their power play to score. They scored the second most goals in the NHL but had the 19th best power play percentage. They score 5-on-5. And that's dangerous because they don't rely on penalty calls to generate offense. Their PP was 1 for 14 against the Kings (7.1%), and is 7 for 51 in the playoffs (13.7%).

They're capable of playing defense. Their talented forwards don't sell out on offense. And they have defensemen and a goalie that can prevent goals. They allowed 102 goals in the regular season, fewest in the NHL. Their penalty kill was 3rd best in the League (the Bruins were 4th best). And Chicago just finished a defensive minded series against the LA Kings. They also beat the Red Wings in a low-scoring Game 7, 2-1 in overtime.

They have more character than Pittsburgh. They came back from a 3-1 series deficit to beat Detroit. They grinded out wins against the defending champions. And during their 21-0-3 start to the season they found ways to win every night. They didn't simply roll over less talented opponents. They stole games in that streak.

And as well as the Bruins played against Pittsburgh, they've been a Jekyll and Hyde team all year. Even against the Penguins, they played outstanding in Games 1 and 2, poorly during regulation of Game 3, and flat in Game 4. Which Bruins team will show up in this series?

So I'm not as confident, not as comfortable, not as sure as most people seem to be about this series.

This series is going to be decided by small, slim margins. Both teams struggle on the power play. Whoever can get some production from their PP unit could be the difference in a game, maybe even the series.

Both goaltenders are playing well. Rask is probably the hottest goalie in the NHL. If he comes down to earth a bit, the skaters in front of him need to play better. Same goes for Crawford. If Crawford cools, then the pressure will be on the Blackhawks to step up and support him. I feel like one of these goalies is going to have a shaky game. Not a horrible game, just allowing a soft goal or two. Which goalie will it be? Neither was a starter when these teams won Cups. Crawford is 28, Rask is 26. One goalie having an off-night could be the difference in the series.

Which cold scorer will get hot? Tyler Seguin has 1 goal and 3 assists in the playoffs. Jonathan Toews has 1 goal and 8 assists. Which one of these guys will score a few goals in this series? Both of these guys are capable of winning games with their offense. One of them could steal a game with a pair of goals.

The Joys of Being a Boston Fan in the 21st Century

The Bruins advancing to the Stanley Cup Finals is the latest example of what's been a trend in Boston sports: deep playoff runs. As a sports fan growing up in the '90s, when it was a major achievement if teams merely qualified for the playoffs, this is simply a terrific time to be a Boston sports fan. These are the good old days.

What's really enjoyable are the deep playoff runs. Because let's face it, none of us have any impact on the on-field/court/ice success of these teams. We share in the glory as if we did, but we don't. And we also conveniently don't share in the epic failures, like the collapse of the 2011 Red Sox, or in 2010 when the Bruins blew a 3-0 series lead against Philly. So as much as we gloat about our teams winning, it's more about the fun of watching our teams win.

What's truly fun is enjoying the extra baseball/football/basketball/hockey. What's fun is going to a packed bar on a Tuesday night to share an experience with strangers and friends. And anything that can postpone the time when baseball is the only sport available is a good thing.

We've been able to enjoy hockey and basketball in May and June. We've been privileged to watch baseball in October. And football season for us extends into January and February. Our weather seasons up here are sometimes erratic and sometimes very short. But our sports seasons in New England, in this century, have been significantly longer than average.
Posted by rob at 4:00 PM No comments:

Situations to Use Tim Tebow 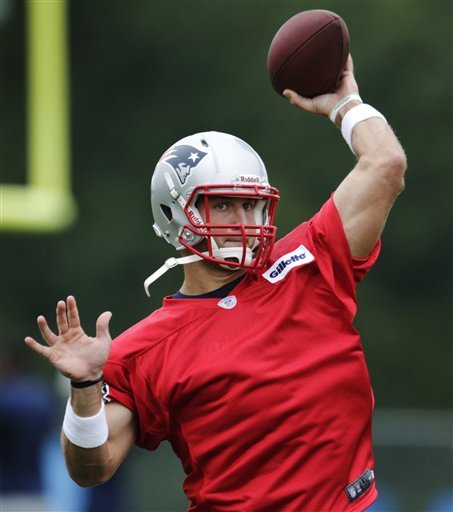 Yesterday Tim Tebow arrived, and the difference in his arrival to New England compared to his arrival to New York demonstrates how different his role here will be. Last year Tebow had his own press conference when he was introduced as a member of the Jets. Yesterday he briefly spoke with the media, gave a stock "happy to be here" statement that I'm sure was prepared beforehand and given Belichick's blessing (pardon the religious pun). And let's also remember that Rex Ryan didn't seem to want Tebow on his team. I'm sure Belichick does, or he wouldn't be here.

I know it's a little weird to talk about a football player playing football, and not talk about media circuses and the Gospels, but let's try. Here are some situations in which Tim Tebow could be a good player to have on the field:

Punts:
The Jets used him as a protector on their punt team. It makes sense. Not only is he a big guy, but he's a threat for fakes. Both running and passing. Even if you don't fake, the opposing team must respect the possibility, and that might mean their return isn't as focused on blocking.

FG Holder:
Again, for the potential to fake.

Short Yardage/Goal Line:
You line Brady up under center. Brady's as good as it gets at the QB sneak. You also line Tebow up as a tailback. Or even a fullback with Ridley or Vereen as the tailback. So as Brady moves under center, if the sneak doesn't look like a good option, he can hand it off to Tebow. Or fake a handoff to Tebow and go play-action and throw it to Gronk or Hernandez. Or hand off to Ridley/Vereen and have Tebow block. Or have Tebow run in the opposite direction of the ball and fake out the defense. Tebow will draw attention when he's on the field.

Fullback:
The traditional fullback is an endangered species. Belichick has frequently used players from other positions to fill the role, from linebackers to tight-ends. There are very few times when this need arises, short-yardage is one of those times. So is running out the clock late in games (which the Patriots don't do in the traditional way).

There are times that require powerbacks and fullbacks. Vereen (205 pounds) is not a powerback. Ridley isn't much of one either (220 pounds). Tebow weighs 236. He's strong. He can be the fill-in fullback.

Tight-End:
This one seems far-fetched. The Patriots have Gronkowski and Ballard. Hernandez is kind of a slot guy, but still a tight-end. Tebow could be used as a 3rd tight-end, again in short yardage situations. I have no idea how well he can catch. You don't want a guy bobbling the ball when defenders are all around him, eager to snatch up a loose ball for an interception. I have to see Tebow's hands before wanting him to play any tight-end.

Trick Plays:
Josh McDaniels got a little too clever with his trick plays last year. He loved using Edelman in crazy reverses and option runs. I hope McDaniels doesn't get overly creative with Tebow trickery. There are moments for trick plays. Two-point conversions, for instance, are a great time to line up Tebow and Brady next to each other in shotgun formation and get weird.

Does he put you over the top? No. And we don't even know how many, if any, of these tasks he'll be able to carry out. But there are potential roles he can play. He can be like Steve Buscemi or Paul Giamatti, parts of the supporting cast that are only in a few scenes and help add texture and depth to the movie. So just imagine Steve Buscemi, only with the paparazzi following of Kristen Stewart combined with Lindsay Lohan. 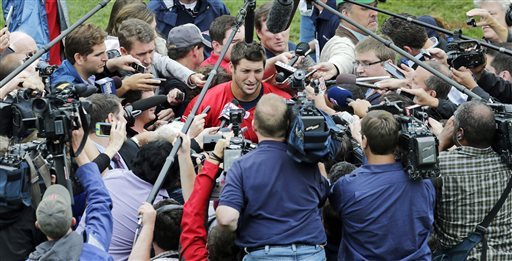 But didn't Ichiro have a huge media following when he played in Seattle? And did the Boston Sports Media worry as much over the media attention that Daisuke Matsuzaka was going to bring with him? I think we're witnessing the media overreacting to the impact that the media's overreacting will have on a team. This is the media's version of Inception.