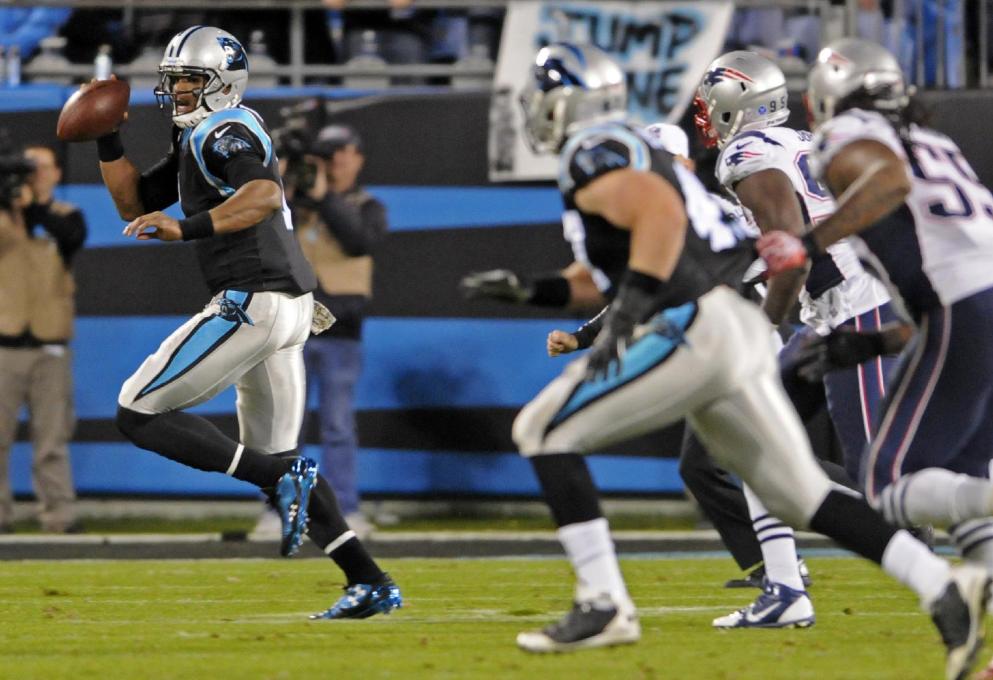 I'll launch a tirade about the call-then-non-call at the end of the game. Then I'll get to the game.

I find it odd that pushing a teammate when trying to block a field goal is penalized, but hugging a tight-end in the end zone is not. And I find it odd that a lawyer from Nebraska (referee Clete Blakeman, who did play QB for the Cornhuskers in the 1980s), can make an instant judgment about the athletic abilities of Rob Gronkowski AND Luke Kuechly. On the spot, the officials determined that Gronkowski would have been physically unable to turn and compete for the football in the end zone. Further, the refs determined that the influence Luke Kuechly exerted on Gronk wasn't what kept Gronkowski from competing for the ball.

I hate the fact that one official, who was on top of the play, instinctively threw his flag. He saw SOMETHING. Then the crew decided that whatever he saw was nullified because of something else. And it's still unclear what any of those somethings are.

If the official in the end zone had kept his flag in his pocket because it was the last play, and in all sports officials allow things to happen at the end of games that they would normally penalize in the earlier stages, that would have been fine. Instead, a flag was thrown for some reason, picked up for another reason, and the game ended with a question mark. Not a period, or an exclamation point.

The Patriots did plenty to lose this game before that last play. Stevan Ridley's fumble might have cost them a touchdown. The 4th quarter pass on 3rd and 1 in the Red Zone was also poorly executed and a weird decision. A trademark of a Josh McDaniels offense is that he tries too hard to stay one step ahead of you. Instead of having faith in the players to execute, he tries to outwit his opponents. And instead of staying with something that works, he'll try to adjust his offense BEFORE his opponent adjusts to what had been working.

It's like trying to counter a chess opponent's move before he's made it. It's not strategically sound.

The Patriots defense also looked much weaker than it's been in earlier stages of the season. With no Wilfork, no Mayo, no Dennard, the Panthers were able to mount some impressive drives. Aqib Talib was criticized a great deal, but his game wasn't as horrible as you might think. Steve Smith caught 4 passes for 62 yards. Talib didn't have his best game, but he wasn't torched either.

Every time the Patriots collapsed the pocket around Cam Newton, it was a bad thing. Give him credit for making sensational plays. But also criticize the Patriots for not being cautious with him. You don't want to collapse pockets around Newton, you want to contain them. He's explosive, and with explosives you want to keep them contained and controlled.

I'm not disheartened or worried by the outcome of this game. This game was winnable. Carolina played better. But the Patriots weren't inferior in terms of talent or ability or effort. Just in execution. If Ridley keeps the ball, if Talib keeps his temper, if the play-calling was better, et cetera. These are all attainable ifs.

So I'm not concerned by this. The Patriots failed a test, but did show they have the capability of passing it.

Speaking of tests, the Broncos come to town Sunday night.