When I heard that the Jets suspended Sal Alosi for the season, I thought that they handled things the right way. Especially when Alosi confessed that he'd instructed a couple sidelined players to line up as a "wall" for the play. But then Jets' special teams coach Mike Westhoff came out and said this:

"A number of teams do it. There is a pretty good team up north that lines their whole defense up when they do it, so it's something that just kind of happened... Well, if you watch them -- their defense when the opponent's punt team is out there -- they're up there pretty close to the line so it looks like they are trying to do it. Now are they doing anything illegal? Are they tripping anybody? Heck no. I'm not saying that. That's not the point. But, yeah, they're lined up there. Is it making a difference? I don't know. I really don't know, because to tell you the truth, before this happened, I never really looked at anybody's sideline in all my years."

You just have to love the Real World/Road Rules mentality they have down in the Meadowlands. It's great entertainment, isn't it? These coaches have no little voice in their heads that censors what they're about to say.

I honestly have no idea if the Patriots align their sideline players in any sort of wall in order to disrupt the gunners of an opposing team. Nor do I care. What Alosi did wasn't bad because it violated some unwritten sideline etiquette guideline, it was wrong because he intentionally interfered with a play.

Instead of moving on, saying no comment, or even saying "that was wrong of Sal," Westhoff runs his mouth about what the Patriots do.

As an organization, the Jets did the right thing to put this incident behind them. But they still have some soldiers that need to fall in line. Then again, when the head coach is best known for his mouth, it must be hard for him to convince his subordinates to watch theirs.

WHY THE CELTICS ARE WINNERS


I only saw the end of the game last night, but still saw quite a bit. Players like Pierce and Garnett just know how to win these games. It's that simple.

It was a brilliant play by Pierce, but more impressive was the timing of it. He essentially left the Knicks with no time to respond. How many times have we seen players hold on too long, and not get a shot off at all?

The C's are still the masters of their division, and the Eastern Conference.
Posted by rob at 11:00 AM No comments: 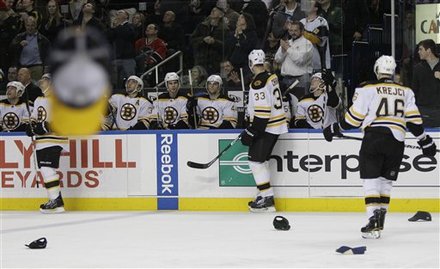 I'm getting tired of Patrice Bergeron. It's kind of sad when the best he performed in the game, was in the post-game scuffle. He's adept at faceoffs, he's an excellent defensive forward, and you'll never see him make a mental mistake. But he's slow. My God is he slow. And when he gets a shooting lane, he'll either miss the net completely, or hit the goalie's chest, right in the logo.

He made the Canadian Olympic team because he does the little things. However, the Bruins don't have enough guys that do big things. I wouldn't mind trading Bergeron in the off-season, even if it were just for a draft pick. He belongs on a team that already has scorers, not a team that severely lacks them.

The refs were a bit iffy last night. Then again, killing 5 penalties is not a tall order. It is frustrating, though, that the 2 goals the B's allowed on the PK came from the 2 most questionable calls.

The most inexcusable goal was Buffalo's 2nd, which was a 5-on-5 goal. Thornton made an ill-advised pass in the neutral zone that got picked off. Then Boychuk failed to mark Drew Stafford, leaving him open for a one-timer in the slot. It was an unfair position to put Tuukka Rask in. Only Tim Thomas, or possibly Jesus, could have stopped that shot.

The Bruins' offense will struggle, which is why it's so important for the defense to not screw up like they did on that goal. I don't know why Shawn Thornton (of all people) is trying to thread the needle with low percentage passes like that.

Speaking of Thornton and his line, I like how regularly Claude Julien plays them. At the same time, it's not a scoring line. When you've held the puck for a minute in Buffalo's zone, and there's a faceoff in there, don't send out Thornton's line. Send a line that has a chance to score a goal. Send Krejci's line. This happened in the middle of the 1st period, and it baffled me.

I'll end on a rare positive note. 22 year old call-up Steve Kampfer (in German, his last name means "fighter") has acquitted himself nicely these last few games, replacing the injured Mark Stuart. He's not making mistakes, he's fast, and he's confident with the puck. He got an assist in this game, and genuinely earned the 20 minutes of ice-time he got.

The Bruins travel to Montreal to play the Canadiens tonight. In this 8 day stretch of tough games that started Saturday (Exam Week), they still haven't won yet. Tonight's a good time to change that.