Things are getting nuts out there. Bad blood, rats on the ice, and a sad octopus. It was a very entertaining weekend of hockey. The Red Wings only lost 10 times at home in the regular season. The Predators, however, won a huge game in Detroit yesterday afternoon. The Preds have been able to get early leads and force the Red Wings to chase the game. And with Pekka Rinne, any lead is a very safe lead.

I hate the Penguins more and more every game. James Neal levels a dirty and late hit on Sean Couturier, injures him, then gets absolutely no penalty for it. The Flyers tried to take care of business themselves (Neal, right after Couturier had been helped off the ice, was messing with Claude Giroux), which got messy. Then Crosby looked like he was trying to initiate a fight with Brayden Schenn, then refused to drop the gloves. Moments later, Crosby tried pulling Hartnell off Neal. Hartnell went after Crosby as if he were anyone else, then Craig Adams becomes the 3rd man in (automatic game misconduct), then fights Hartnell, then pulls Hartnell's hair.

In short, a Pittsburgh player dishes out a dirty hit and injures an opponent. He doesn't get penalized (we've heard this story before, haven't we). Then the Penguins fight dirty. That's if they're willing to fight at all.

Nobody took Florida very seriously. They were used as an example of the NHL's imperfect playoff system. Stephen Weiss, who's getting his first taste of playoff hockey in south Florida, scored two Power Play goals. That's pretty impressive against the Devils' PK unit, which was the best in the NHL in the regular season. 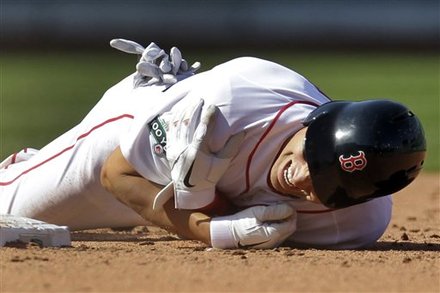 After suffering a partial dislocation of his shoulder Friday afternoon, Jacoby Ellsbury was placed on the 15 Day DL. There is, as of yet, no timetable for his return. The Sox don't even seem to be sure how partial the dislocation was, or whether or not Ellsbury should undergo surgery.

The Sox really didn't need this. They're already very weak in the outfield, and already have some potential holes in the lineup.

What has me worried is the lack of a timetable. This seems like the kind of injury that is healed when it's healed. And until it feels healed, it's considered injured. There's no test for a doctor to conduct and say "It's all better."

And that means that if Ellsbury takes more than a week to recover, the amateur M.D.s in this town will start questioning his toughness. Ellsbury, probably unfairly, got a reputation for taking his time to return from injury in 2010. So if this shoulder problem takes more than a month to be resolved, expect moans and groans from Red Sox Nation.

And another thing that worries me is Ellsbury himself. What if he feels the need to return as fast as possible to avoid reaffirming that 2010 reputation? What if he returns before the injury is properly and completely better?

I don't mind DL stints in April. Even if they stretch deep into May. But I do mind 60 Day DL stints in September and October.

So take your time, Jacoby. Don't worry what morons say. 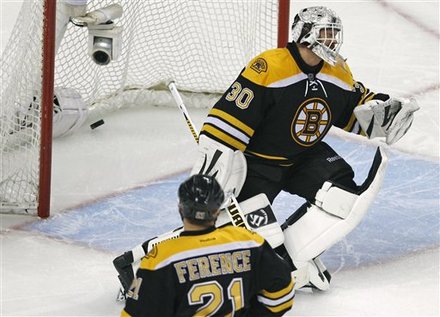 As painful as double OT losses are, I'm going to start with a very positive thing I've seen in this series.

Tim Thomas is in Conn Smythe form. Maybe it won't last, but he is fresh and playing at his absolute peak. 2 goals in 144 minutes. He's stopped 96.4% of the shots he's faced. He's averaging less than a goal allowed per game (0.83 GAA).

Statistically, he's been matched by Braden Holtby. In fact, Holtby's save percentage is higher (.977). The 22 year old former Hershey Bear has become one of the biggest stories of the playoffs so far.

But Thomas' saves have been much harder. That's no knock on Holtby, it's a compliment to the Capitals and a criticism of the Bruins' forwards. The Caps are occupying space in front of and around Thomas. The Bruins aren't doing the same to Holtby. Holtby has had the crease to himself.

The B's seem content with peppering Holtby from the perimeter. The Caps seem fine with that too. They're yielding the outside to the Bruins and clogging up the middle. Holtby's given up rebounds that would be juicy if there were anyone in a black sweater to capitalize.

Guys like Marchand, Lucic, Bergeron, and Rolston need to get to the front of the net. Be there for rebounds. And be there to make Holtby's job difficult. Screen him, disrupt him, get him angry. He's already taken a minor for roughing. Push his buttons some more. See if he unravels.

The Bruins have not produced any offense. The Power Play has been crap, and Kelly's line are the only players with points.

Part of the problem might be Bergeron's line being on the ice to face Ovechkin. Seguin, Marchand, and Bergeron were #1, #2, and #5 on the list of Bruins goal scorers. They've been playing in much fewer offensive situations than usual. And lining up against a tough line.

Maybe Seguin can move to the Krejci line. Seguin is a bit out of place when facing Washington's top guys anyway. And his playmaking ability could spark Krejci and/or Lucic. Peverley can move to the Bergeron line which might even make them better defensively.

Lucic and Krejci need to step up. It's the playoffs. Krejci was 1-8 on faceoffs Saturday. He played close to 28 minutes and I can't remember that he was ever on the ice. He's been a ghost.

Considering how well the Bruins have played defensively, and how poorly most of them have played offensively, they deserve to be tied 1-1. The good news is, these are all problems that can be solved internally. Washington has played well, but the B's haven't been making things very tough on them.

Game 3 tonight on NESN and NBC Sports. Not a bad way to end Patriots' Day. 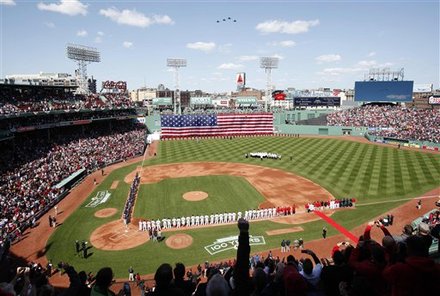 Maybe it's the proximity to Popeye's Chicken on Brookline Ave. Maybe it's the warm weather or the comfortable and familiar confines of the ballpark. Whatever it is, the Red Sox are back home, back to winning, and almost back to .500.

The Sox have scored 31 runs in their 3 home games. This after scoring 22 in their 6 road games.

There have been some good pitching performances, too. Beckett tossed a gem on Opening Day (8 innings, 1 run), and the bullpen hasn't allowed a run since the 9th inning of Opening Day. You can feel waves of optimism emanating from Fenway Park. Beckett's back, Buchholz at least managed to go 7, Doubront did okay, and the offense is producing. Why not be positive?

Here's why not: The Sox have been scoring in bunches. Which is good. But it's been either feast or famine. The Sox have scored 53 runs as a team this year. 43 of those came in only 4 games. They've scored 10 runs in their remaining 5 games. More than 80% of their offense has come in less than half their games.

I was more impressed with yesterday's 6 runs than the 13 and 12 scored on Saturday and Friday. Because it was legitimately impressive production. Not just beating up bad pitching. This team's biggest problem last year was consistency. They could jump on subpar pitching, put up big innings, score a dozen runs, and that's great. But then they struggled to consistently score against decent pitching.

And with the rotation as unpredictable as it is, the Sox will win and lose with their bats. And with inconsistent bats, this means that the 2012 Red Sox will be just as streaky, just as inconsistent as the 2011 edition.

Bard faces James Shields this morning, in what should be a very good test for the Sox' hitters.