Good news: the Sox can't lose for the next 48 hours.

For the second time this season, Jon Lester logged a very good performance. And yet he's 0-1. The bats have been silent for him.

Then again, the Sox only managed 3 hits today. That's it. All of them singles. The 2 through 6 hitters combined to go 0 for 18. With 1 walk. Ricky Romero looked like an Ace today.

On the bright side, Lester is looking good. He has both of the Red Sox' quality starts.

And on an even more positive note, the Sox bullpen didn't allow a run. Lester pitched all 8 innings today.

Something that's gnawing at me is that I'm not seeing the Sox do the little things much. Throwing runners out on the basepaths, for instance. This team seems to think that they're so talented that they can relax. That they don't need to fight and claw for every out and every base.

It's very uninspiring baseball to watch.

Maybe the Sox can turn things around at home. They host the Rays Friday afternoon. Josh Beckett opposes David Price. 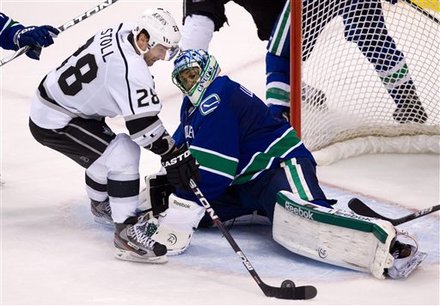 Congratulations to the Vancouver Canucks on yet another President's Trophy. We're all very impressed here in Boston.

Anyway, the Canucks bring their same old show to the 2012 Playoffs. Outstanding Power Play, high-flying offense, and goaltending that is good but always a meltdown away from massive controversy.

The Kings will try to keep these games low scoring. Their offense is one of the least potent in the NHL. They do have Vezina candidate and Milford, CT native Jonathan Quick. If Quick can steal a game or two, then the Kings could make this 1vs. 8 matchup very interesting.

In net for Vancouver is Roberto Luongo. For now. Cory Schneider is waiting in the wings. Schneider played in 33 games for the Canucks, including 5 relief appearances. His GAA was 1.97.

This goaltending controversy is actually bad news for the Kings. Because if Luongo melts down, Schneider will be there to pick up the pieces.

LA will make it a tough series, but they won't be able to score that pivotal 3rd goal in tight games, at least not enough to win the series.

As loaded as Detroit is with familiar names, their fate hinges on Jimmy Howard. The 28 year old goalie missed time with a groin injury, and the slide in Detroit's play was noticeable. The Wings were 35-17-4 with Howard in net. 13-11-2 without him.

The Predators also rely heavily on their goalie. Pekka Rinne played in 73 games but still managed to put up solid numbers. If they do go deep in the playoffs, it will be on Rinne's back.

But they're talented elsewhere. They had the most potent Power Play in the league. Meanwhile, Detroit's PK unit was 18th in the NHL. The Preds should be able to score some key goals with a man advantage.

If Detroit were healthy, I'd pick the Red Wings. But they have a few injury question marks. Nashville plays well at home, Detroit struggles on the road. Nashville will score on the Power Play. Detroit will struggle to stop them. I completely understand and agree with Francona's decision. The Red Sox Front Office used Francona as a scapegoat, then planted stories in the media suggesting he was abusing pain killers. If I'd been let go in my job, and then my former employers spread rumors about me popping pills, I probably wouldn't want to participate in any celebrations held by those employers.

The Sox would love to bring Francona back, trot him out as a PR move. It would remind us all of 2004 and 2007. And it would make it seem like all wounds are being healed. They've been very good at welcoming back former players, especially those that the fans loved. Even Nomar was allowed to technically finish his career in a Red Sox uniform.

Instead, Francona will be a notable absence next Friday. The only living man to manage a World Series winner in Boston. And he won't be at Fenway for the park's 100th Anniversary.

It speaks volumes about how things are done on Yawkey Way. It isn't enough to fire and hire people. The Sox feel the need to besmirch the reputations of those they let go. The more the fans love a departing player/coach, the further the Sox go to soil their reputation.

The Sox make business moves, then turn them personal.

The current owners of the Red Sox have done well. They've given the fans two World Series titles. But would you trust them? Would you take them into your confidence? Would you turn your back on them?

Apart from the Bruins series, of course, this is the matchup I'm most looking forward to seeing. These divisional rivals don't like each other. They play the game differently. They're both very physical. And they're both very good. Anything less than 7 games with a few OTs, some 8+ combined goal shootouts, and even some fights, and I'll be sorely disappointed with this series.

But who has the edge? Unfortunately, I have to say it's Pittsburgh. That's right, I'm actually rooting for the Flyers here. At least the Flyers are honest about what they are. The Penguins act all high and mighty while they headhunt.

The Penguins have the goaltending advantage. Bryzgalov hasn't had a good postseason since he was a Duck. And Marc-Andre Fleury's reputation is well known.

The Penguins are also healthier. Philadelphia will miss Chris Pronger the most in this series. Meanwhile, all of Pittsburgh's key players are fit and ready to go.

The Flyers are one of the most tenacious teams in the Stanley Cup Playoffs, but Fleury is tough to beat, and the Penguins' health will eventually wear down the Broad Street Bullies. 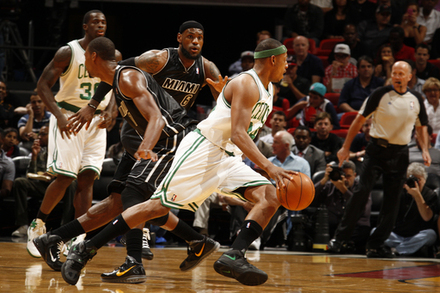 The Celtics had their best shooting performance of the season. They put up their highest point total of the season. And they have effectively scared the crap out of every Eastern Conference playoff team.

Rondo continues to prove his critics wrong. 18 points and 15 assists. That's 18 straight games with 10+ assists. But hey he missed 3 free throws. So let's trade him.

Kevin Garnett was unreal, especially in the 4th. He finished with 24 points, 10 in the 4th quarter. He also did a great job defensively on Chris Bosh, who only scored 13.

Avery Bradley scored 11, Brandon Bass had a double-double with 12 points and 10 rebounds, Pierce had 27. Off the bench Ray Allen added 9, and Greg Stiemsma came out of nowhere with 8 points and 7 rebounds. The Celtics were +10 for the 20 minutes Stiemsma was on the floor.

The Celtics aren't always going to shoot 60.6%. Obviously. But this team has remembered how to be dangerous. KG and Pierce are in the groove, Rondo is on fire (especially in big games), Bradley and Bass have found roles, and now Ray Allen is a weapon off the bench.

Nobody wants to face this team. They could be the best #4 seed in the NBA playoffs since the current format was adopted.

Horton Out for Playoffs The Bruins have announced that Nathan Horton will miss the 2012 Stanley Cup playoffs. This isn't much of a shock, but it's still a disappointment. Horton was a major part of the Bruins' 2011 Cup run, with 3 game winning goals (two of them in Game 7s). When he was injured by the Canucks, the Bruins seemed to focus their efforts and rally around him. And we all know how well that turned out.

Horton is the latest in a long line of talented players that have to watch NHL games from the stands because of concussions. And I don't think issuing 2 or 5 or even 10 game suspensions will solve the problem.

The players need to police themselves, not launch at opponents who have their heads down. It seems like concussions are occurring as often on clean hits as they are on dirty ones.

The rules need to be altered to allow for some clutching, grabbing, and interference. I don't want to see the game slow down, but give a defending player more options than just a hard shoulder check into the boards.

Anyway, I think we'll all miss Horton during this postseason.
Posted by rob at 10:40 AM No comments: 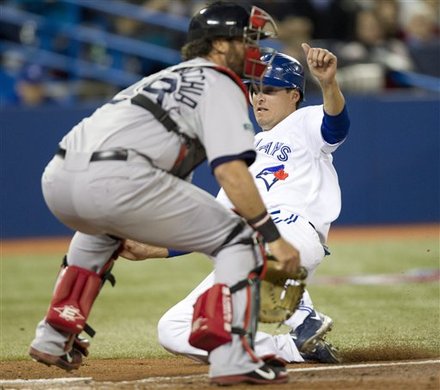 Going back to September 1st of last year, the Red Sox are 8-24. That's .250 baseball. So I'm not just "panicking" over a slow start. I'm concerned about what seems to be a continuation of a pattern dating back to last year. The calendar is different, but the games look eerily similar.

On the bright side, Daniel Bard was better than his 5 inning, 5 earned run line score suggests. The first run he allowed came in the 1st, when the Jays had a few well-placed hits and squeezed out a run. The last two runs charged to Bard occurred with Justin Thomas on the mound.

Bard looked promising. There's room for improvement, but he did well. He didn't let a few bad breaks affect him, he mixed up his pitches as the game progressed, he threw strikes (65 strikes, 31 balls, slightly better than the 2:1 ratio you want to see), he didn't walk anyone until the 6th inning, he got better as the game progressed.

His slider was devastating. He worked the changeup in later in the game, and that went well. But the Jays repeatedly made contact on his fastball. Mostly for line drives. He allowed 8 hits. 7 of them were singles.

I'm not yet sold on Bard as a starter. But I am still listening to the sales pitch.

The rest of this team I am definitely not sold on. More bad bullpen work from Thomas and then Michael Bowden. The Sox got plenty of baserunners, but couldn't manage that big hit to break things open. They were 2 for 12 with runners in scoring position. Both those hits came in the 9th with 2 outs and the Sox trailing by 6 runs.

Youkilis finally got 2 hits. If he and Ellsbury can get a little hotter, the offense should find more consistency.

But pitching still worries me. The bullpen is just a mess. And with starters like Doubront and Bard going 5 or 6 innings, that bullpen is even more exposed.

Maybe Lester can turn things around this afternoon. He faces Ricky Romero at 12:37.