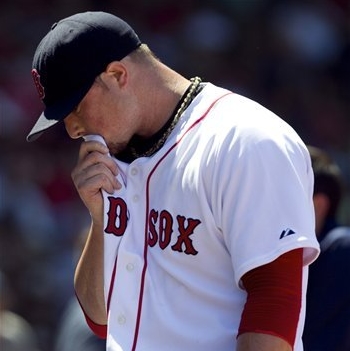 Should we be surprised by this team's disappointments anymore? After taking 3 of 4 from a division leader, they get swept by a team which had been in last place. The Red Sox are 15-15 in their last 30 games. A remarkably uniform achievement of inconsistency.

I'm seriously considering the idea that the Red Sox should simply trade Josh Beckett and Jon Lester. The Red Sox are 1-6 the last 7 times Beckett took the mound. They haven't won with Lester starting since June.

With these guys on the mound, the Sox are 13-23 (.361). The Sox are 35-25 (.583) when someone else starts. These are supposedly the best two pitchers on the team, but the team is .222 winning percentage points better when Beckett and Lester are spectators.

Beckett has always been inconsistent and unreliable. This season's struggles aren't much different from his poor 2010 performance, his inconsistency in 2008, or his shitty September last year.

Now his ERA is 2 runs higher than normal, his WHIP is slightly higher, and he's giving up much more extra-base hits.

Or maybe the explanation is simple and he just sucks.

I doubt the Red Sox will trade either of these guys. Let alone both of them. I do know that the .583 winning percentage they have when others are starting would be good enough to lead the Wild Card race. And if the Sox were merely .500 in Beckett and Lester's starts, they'd be 53-43, would be leading the Wild Card, and  be only 4.5 games behind the Yankees.

As it is, the Sox are in last place in the division, and 4 teams stand between them and the Wild Card spots.

The Sox start a 6 game road trip against the two best teams in baseball. Tonight Felix Doubront opposes Scott Feldman of the Rangers. Feldman is a converted reliever with a 5.89 ERA. The Sox should be able to do something against him.