Bard Needs to Go to the Bullpen, But the Red Sox Have Been Good Otherwise 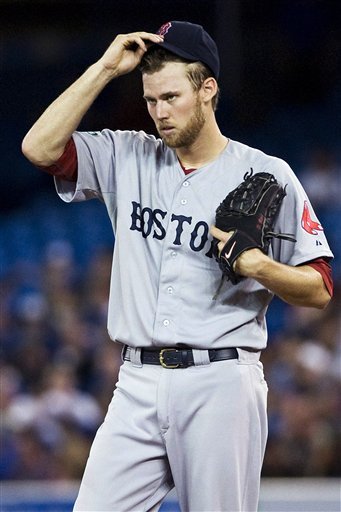 The experiment of Bard in the rotation has proven unsuccessful. He simply isn't a starter. And the culprit is the same thing that prevented him from being a starter when he was first drafted: bases on balls.

In 55 innings, he's walked 37 batters. He's struck out 34. Yesterday he threw 55 pitches. 24 were strikes. A good pitcher will throw twice as many strikes as balls (or better). But not Bard. When he's a starter, the walks pile up. And because he isn't throwing many strikes, so does the pitch count. It's the same problem that plagued him in 2007 in A ball. He's also hit 6 batters this year.

When Daisuke is ready to return, Bard needs to go to the bullpen. It simply is not working out for him in the rotation. At best, he's a #5 pitcher, giving you 180 mediocre innings. I'd rather have 80 quality innings from him out of the pen.

Apart from Bard's struggles, the Sox have been thriving. They've only lost 1 of their last 7 series. They're 16-7 since David Ortiz called a players only meeting after Beckett was shelled by the Indians on May 10th. They're still last in the AL East, but they're only 1.5 games out of the second Wild Card spot.

On Saturday, Felix Doubront had yet another Quality Start. He's now 6-2 and deservedly so. You really can't ask more from a 4/5 pitcher than that. Not to mention his ERA is 3.75.

And Clay Buchholz seems to have settled down. He went 8 innings Friday night, only allowing 2 runs. He struck out 7. That's two straight Quality Starts for Buchholz. He only has three on the season. He has a 2.40 ERA in his last two starts. 15 innings, 4 earned runs, not bad at all.

The Sox need to keep this momentum going. They can take advantage of a Baltimore team that's been struggling lately. They have today off. Then Lester faces 6-2 Jason Hammel on Tuesday.

What Tim Thomas Did to the Bruins

He's won two Vezinas and a Conn Smythe here. And he's the player most responsible for the Bruins' 2011 Stanley Cup Championship. Yet some people in this town accuse him of "putting himself above the team." Why? Because he didn't pose for a picture with Barack Obama and because he wants to spend a year with his family. How horrible and selfish of him.

Tim Thomas is taking a year off from hockey. He announced it yesterday on his Facebook page. He's not retiring. And so the Bruins are still responsible for the $5 million cap hit, even if the team suspends him. Legally, he still owes the Bruins a year of hockey, and they still owe him $3 million of salary (the cap number is the average yearly salary of the entire contract). The Bruins can "toll" Thomas' contract, which would mean taking the cap hit now, then having Thomas play for them in 2013-14 without a cap hit.

In any scenario, the Bruins still have to assume the $5 million cap hit. It's a stupid stipulation of the NHL's overly simplistic salary cap. It's a silly rule made to protect the poorly constructed cap from being taken advantage of. Sort of like duct-tape used to hold together rusty iron girders that support a skyscraper.

Why not just retire now? That's a question that some are asking. And then following up with a "he's putting himself above the team" type of statement.

The problem is, even if Tim Thomas retires, the Bruins are still responsible for $5 million against the cap. At least that's what a clause in the NHL CBA seems to read. It's  a clause for players signed to deals when they're 35 or older:

“All Player Salary and Bonuses earned in a League Year by a Player who is in the second or later year of a multi-year SPC [standard player contract] which was signed when the Player was age 35 or older (as of June 30 prior to the League Year in which the SPC is to be effective), regardless of whether, or where, the Player is playing, except to the extent the Player is playing under his SPC in the minor leagues, in which case only the Player Salary and Bonuses in excess of $100,000 shall count towards the calculation of Actual Club Salary;”

I haven't gone to Law School, but I think what this part of the CBA states is that if a player who is 35+ years old signs a deal, the team's cap number must include his salary for the duration of the contract, even if he's retired (that's the "regardless of whether, or where, the Player is playing..." part).

The point of this rule is to prevent teams from signing close-to-retirement players to big long-term contracts that are frontloaded. You don't want a team signing a 39 year old player to a 20 year, $20 million deal ($1 million cap hit per season), that pays him $9 million each of the first two years, then he retires after getting paid $18 million, but the team only had a $1 million cap hit.

So Thomas' $5 million cap hit was going to be in effect even if he retired. It would only not affect the Bruins if he were traded. Of course, his desire to take a year off severely reduces his trade value. I'm sure the Bruins will try to make a deal with other teams, but it's going to be hard to get much value for a 38 year old goalie who will be hanging out in Colorado for a year until he's 39.

So Thomas did put something ahead of the team. He admitted as much in his Facebook announcement. He wants to focus on his family. On his life off the ice. And because of that, the Bruins will struggle more to trade him. To tell the truth, though, his trade value wasn't incredibly high to begin with. He has one year left on his deal, he's 38 years old, he peaked in 2011. Struggling teams would want a more longer-term solution in net, and almost all of the contending teams already have their goalies in place.

What he is taking from the Bruins now is so small and trivial compared to what he gave the Bruins and their fans last spring and summer. Only two Bruins have won the Conn Smythe Trophy. Bobby Orr is one of them. Tim Thomas is the other. I think the balance sheet of what Thomas has given the Bruins and what he's taken away by taking a year off shows that the B's are well in the black. 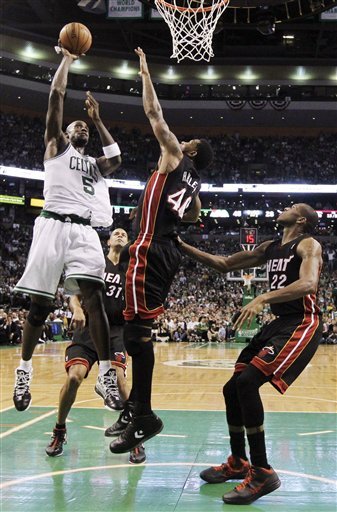 A few days ago, this seemed hard to believe. The Celtics were down 2-0. Even when they'd played well, Miami had beaten them. But after one weekend, it's all even at 2-2. The series now a Best of Three.

The officiating changed when the series came up to Boston. NBA refs seem to be the weakest willed human beings this side of Vichy France. They are so beaten into submission by star players, legend coaches, and 18,000 fans screaming at them. I would bet that of all professions, NBA referees have the highest rate of wives cheating on them. Not only are they travelling smost of the year, but they seem like some of the most flaccid men on the planet. Women respect power and decisiveness. So do sports fans. NHL linesmen and NFL umpires routinely score with the wives of NBA refs. Or so I would imagine.

Last night the Celtics shot out to an early lead. They went on a huge run in the 1st quarter, and led by 11. At halftime, they were up by 14. Then they couldn't buy a field goal in the second half. They scored 12 in the 3rd, then 16 in the 4th.

But, when the score was tied and Miami had the last possession of regulation, the Celtics played great defense and shut down the Heat. Then in OT, the Celtics were simply better.

Kevin Garnett was great, especially late in the game. He scored 17 points and hauled in 14 rebounds. His 13th double-double of the playoffs. Rajon Rondo was equally impressive, especially in the first half. 15 points, 15 assists. He was only slowed down when the Miami defense focused almost entirely on him.

Rondo has his share of critics. I'd say that their biggest criticism of him is that he isn't amazing every night. He's only amazing most nights. That's a problem that I can live with. Especially when those nights are big games. He actually gets criticized for doing well in big games. What a City we live in.

Pierce scored 23, Bass scored 11, Ray Allen hit 4 three-pointers and finished with 16. Kevin Dooling scored 10 off the bench and added some serious energy to the game.

As the pressure in the series increases, the weaker LeBron James becomes. He fouled out of this game. We've already seen him be unable to finish games like a true MVP should be able to. Obviously, the Celtics will need to win a road game to win this series. I think they can so long as it's close in the 4th and LeBron wilts under pressure.

I love watching LeBron throw temper-tantrums when he's audaciously called for that 3rd foul. He's so unaccustomed to being called at all. It's hilarious to watch him flail and moan. I stand by Rajon Rondo's halftime comments. The Celtics are playing against a team that cries.

Game 5 Tuesday in Miami. If the Celtics win, the series is over.