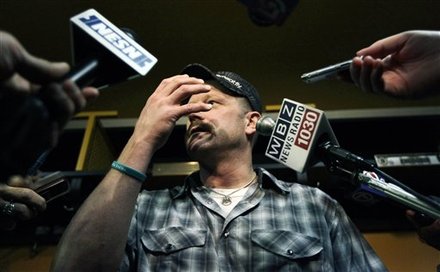 CSN New England has reported that Bruins' goalie Tim Thomas "abruptly" moved his family to Colorado in the middle of the season.

I love how Joe Haggerty added the word "abruptly," which makes Thomas' move seem like he bolted in the night, having the movers tip-toe as they hauled away their furniture in covert silence.

Haggerty, and now others in the sports media, have jumped to the conclusion that Thomas decided his future in Boston wasn't going to extend past the 2011-12 season. Thomas has a no-trade clause which expires on July 1st, next year is the last on his contract, and the Bruins could use the cap space. And that's why he moved his family to Colorado.

I'm not saying that I think Thomas will be here next season. Because I don't. But I seriously doubt that his uncertain future with the Bruins was the motivation behind this move. It doesn't make sense. If he didn't think he'd be a Boston Bruin in the fall, why not wait and see what team he'd wind up with, then move there?

I think he got tired of living in Boston. The White House story set sports radio on fire. People insinuated that he was racist, some blamed him for the team struggling after that, some guy from TSN made a joke on Twitter about his three children all having names that start with K ('KKK').

His three children are 12, 7, and 6. Which means they were going to school with the sons and daughters of Bruins fans who were angry with Thomas for being a distraction. If I were a father, I'd get tired of my kids taking crap in school because someone else's parent was mad at me for not attending a White House photo op.

I think Thomas got tired of the incessant questions and aggravations he and his family dealt with in their daily lives in suburban Boston. Haggerty points out that his source mentioned Thomas might have wanted to be near Team USA's headquarters in Colorado Springs. Haggerty then dismisses this quite reasonable explanation because of that word "abrupt" I mentioned earlier. Why so quickly?

Again, how abrupt was it? Is there any way to know how long Thomas might have been planning to move and just didn't want to say anything because he was already trying not to talk about his personal life with the media?

Haggerty got a weird bit of info and jumped to the most sensational and exciting conclusion possible. He didn't bother to consider other alternatives to the conclusion he reached. He didn't even bother to look at a Wikipedia page about Colorado's Congressional Delegation. He just went with it.

No wonder Thomas moved away from here.
Posted by rob at 2:00 PM 1 comment: 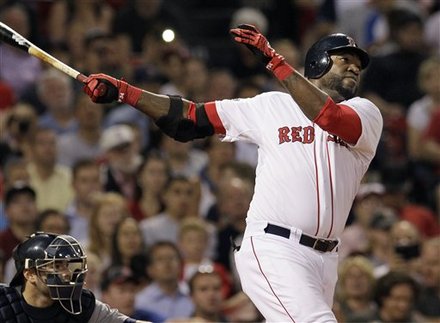 The Red Sox have an abundance of corner infielders. Gonzalez, Middlebrooks, Ortiz, and Youkilis. All of them had big hits last night. Three of them hit homeruns. Gonzalez hit a ground rule double to give the Sox a 5-4 lead in the 7th. Middlebrooks and Ortiz each hit two run shots in the 4th. Youkilis hit an insurance solo homer in the 8th.

With players like Pedroia and Ellsbury on the DL, it's tough to trade Youkilis away. And at the same time his trade value increases, his value to the Sox also increases.

Jon Lester gave the Sox a good start. It's amazing how well the team plays when the starting pitching does its job. He went 6.2, throwing 120 pitches. He was charged with 4 earned runs, but 1 of those was an inherited runner that Albers allowed to score. He allowed 10 hits, but he didn't walk anyone, and he got 7 strikeouts.

Lester is a key figure to the Sox' success. It's hard to imagine the Sox making the playoffs (let alone winning in the playoffs) if Lester isn't performing. He's been a rock in the rotation for a few years now. This year he's been shaky. He needs to put together a few good starts in a row and get into a rhythm. He doesn't have to be an Ace. He just has to be consistent.

I'll give a tip of the cap to Alfredo Aceves, who's pitched in 4 straight games. I'll show more restraint with my appraisal of his performance this season. He's blown 3 saves. One of those came in this 4 game stretch. He hasn't been bad. But let's stop declaring him things that he's not. Only 4 other relievers have blown more saves this season.

Then again, he has stepped up and adequately filled a role the Sox needed to fill. It's not his fault that Papelbon wasn't re-signed, that Bailey got hurt, and that the Sox didn't acquire a starter so they were forced to put Bard in the rotation.

I'm liking Daniel Nava more and more each game. He had an outfield assist in the 7th that proved critical. If he doesn't throw out Avila at second, the 7th inning might have seen Detroit take a lead, not just tie the game.

Guys like Nava, Byrd, and Aceves are easy to root for. There's no doubt that they're giving 100%, and that they're hungry to win.

The Sox are now 13-13 at home. They'll look to sweep the Tigers tonight. Beckett faces Max Scherzer. The Sox tagged him for 7 runs in 2.2 innings back in April (then lost 13-12). He's settled down since then, and has had a decent May. But the Sox should still win this apparent mismatch. 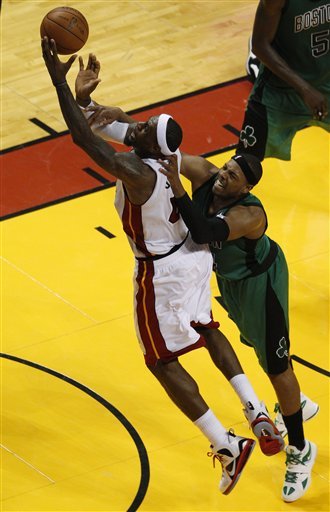 I'm not much of an NBA fan. And that's due partly to the officiating. I just can't seem to tell what's considered a foul and what isn't. I think NBA refs also struggle with that distinction. So when Celtics fans are in an uproar over bad officiating, it takes me a second to look back on the game and realize that the officiating was bad. I'm so accustomed to seeing puzzling calls that I don't really notice it as they happen.

The refs were bad. As bad as they've been in every NBA game I can remember. Get over it. Do people love NBA basketball because if their team loses they can just blame the refs?

Celtics fans had been clamoring for the C's to play a tougher, more physical game. Fans were encouraging fouling, especially of LeBron James. Then the Celtics get called for fouling James. And now fans are whining about it.

The refs did miss that face-rake of Rondo. That was too bad. But bad officials in the NBA Playoffs are like bad weather in the NFL Playoffs. It's something you can't control and have to be able to win despite it.

The Celtics played with a lot of energy for the first part of the game. Especially on defense. Garnett was everywhere. And offensively, the C's were driving. They were staying down low, hauling in rebounds, and Rondo took full advantage of how the Heat tried to cover him.

The Celtics rallied back in the 4th quarter. Then missed a few shots that could have won them the game. Ray Allen missed two rushed jumpers that probably shouldn't have been taken at all. I don't like the idea of Ray Allen taking late-game shots unless he is getting a near perfect look with his feet completely set.

Then the Heat gave the Celtics a chance. Wade missed a free throw. LeBron decided to cover Dooling instead of Ray Allen. And when Allen finally was able to take his time, set his feet, and take a clear look, he sank the three-pointer. Then LeBron missed twice going the other way.

But winning in overtime would be a tough task. Pierce had fouled out. Allen was drained. Garnett was utterly exhausted. Even if the refs called the face-rake on Rondo, I don't think the Celtics would have had enough in the tank to hold off the Heat.

On the bright side, the Celtics improved their shooting. They played better defense, they rebounded the ball, they made their free throws, they didn't get blocked 11 times. And we all saw that LeBron James has no heart whatsoever. I'm not counting the Celtics out yet. It'll be tough for them to win 4 of 5, but if they win Game 3 in Boston, things look significantly brighter.

Game 3 Friday night in the Garden.