Apart from those vomit colored uniforms, BC is looking good.

For the third straight year, the Eagles won the Hockey East Tournament. They survived an early scare from Providence in the semifinals, then poured it on to beat Maine 4-1. BC hasn't lost a game since January 21st. That's 15 straight wins for the Eagles.

At the start of the season, their Power Play was inconsistent, and there was a three way competition for the goaltending spot. Now the PP is firing on all cylinders and scoring timely goals (1/4 against PC, 1 of 3 against Maine), and Parker Milner is looking like he's always been a starting goalie.

This is BC's 3rd straight Hockey East Championship, their 5th in 6 years, 9th in 15 years, and 9th under Coach Jerry York. The consistent level of dominance that BC has attained under York is incredible. Especially considering how much competition there is in Hockey East with teams like BU, and Maine is back to relevance, and the rise of programs like Merrimack and UMass-Lowell.

BC earned a #1 seed in the NCAA Tournament, and are the #1 overall seed. They'll be playing the Regional round in Worcester, opening up against Air Force on Saturday. Three other Hockey East teams made the NCAA field: Maine, BU, and UMass-Lowell.

We'll have a full preview of the NCAA tourney this week. 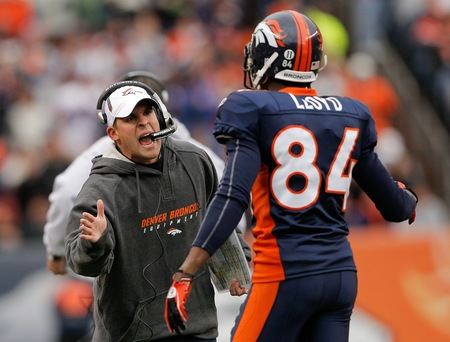 The Patriots went a bit nuts this weekend, signing just about everyone who was very good back in 2010. The big buy was Brandon Lloyd, the former Ram, former Bronco, former Bear, former Redskin. Lloyd had expressed a strong interest in reuniting with Josh McDaniels, and it appears as though that interest was mutual. In 2010 under McDaniels, Lloyd caught 77 passes for 1,448 yards and 11 TDs. Last year, split between Denver and St. Louis, Lloyd caught 60 passes for 966 yards and 5 scores.

Lloyd adds an outside receiver which the Patriots desperately needed to compliment Welker in the slot as well as the tight-ends. Now the Patriots can present even more matchup dilemmas for opposing defenses. Imagine the headaches that defensive coordinators will endure as they gameplan to cover Welker, Gronkowski, Lloyd, and Hernandez.

With Lloyd, Chad Ochojohnson is likely going to be issued his release, along with a map that has a very detailed walking route out of the Stadium and toward Route 1. We know he struggles with routes.

The Patriots also signed WR Anthony Gonzalez. The former Colt has been victimized by injuries just as he was becoming one of Peyton Manning's secondary options behind Wayne, Clark, and Collie. He hurt his right knee in '09, and his left PCL in 2010. He did play last year, he just didn't catch a pass.

This is a classic low-risk/medium-reward acquisition. Gonzalez can play the slot, maybe be a 3rd or 4th WR option in some formations. He can fill the role that we thought Julian Edelman might fill.

The Pats added to their defense as well. They signed Trevor Scott, an OLB/DE who tallied 7 sacks in 2009. He injured his ACL in 2010, but came back last year. He's good in pass-rushing situations. And like Gonzalez, he's a low-risk/medium-reward guy. The type of player that comes with a "but," and a few "ifs." He's good, but he's been injured, and if he's healthy he'll do well. 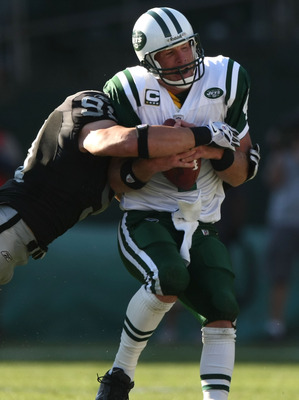 I'm excited about Lloyd. He wants to be here, he's proven to be successful under McDaniels, and he doesn't have to be a Pro Bowler to positively contribute to the offense. He's 30 years old and should have some solid years left. And since he's worked with a McDaniels playbook before, we don't need to have Ochocincophobia about him.

Gonzalez and Scott come with bad medical histories, but they're both 27, and they can both find productive roles on this team. The Patriots lacked depth at wide receiver and Gonzalez provides that. They needed an outside guy capable of applying QB pressure. Scott could be that guy.
Posted by rob at 11:00 AM No comments: 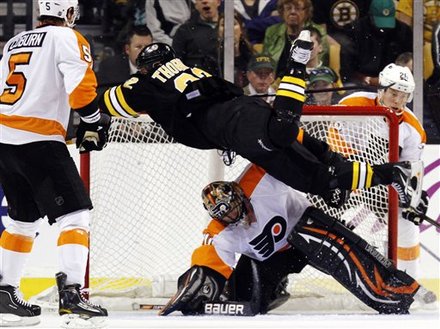 Maybe it was the well lubed St. Patrick's Day crowd. Maybe it was having the Flyers in town. Maybe the Bruins were literally sick of losing. I think all three of these factors played a part in Saturday's perfect storm of intensity. Plus the benching of Joe Corvo, who Claude Julien kindly said was "banged up."

This was how the Bruins won big games last year. It's not raw talent. It's not 40 goal scorers or French Canadian goalies with names that rhyme with Flew-Juan-Go. It's toughness, it's fighting battles, winning battles, making everything difficult for the opponent. Playing sound defense, making the opponent work hard when they're on defense.

There were some mistakes. Some turnovers. Sometimes the Bruins forget how fast certain opponents can close passing lanes. But the B's withstood the Flyers' surges. Thomas played out of his mind. Chara left a physical imprint on the game for the first time in a few weeks. McQuaid embarrassed Hartnell who didn't want to back up his words with fists, then was shepherded across half the ice by Chara. And Johnny Boychuk destroyed Maxime Talbot.


Not only did the Bruins' defensemen do their job on defense, they won the physical game. Chara played like a Captain and Joe Corvo was not missed.

The B's reminded all of us, and more importantly they reminded themselves of what they're capable of. They've got 11 more games in 3 weeks to lock up the Northeast Division. They needed to stop the bleeding. They've done that. They're still 1 point ahead of Ottawa with 2 games in hand.

They remembered how to play Boston Bruins hockey. Let's hope that unlike most Bostonians, they actually remember what they did on St. Patrick's Day and why they did it.

Phil Kessel and the Maple Leafs come to town tonight.