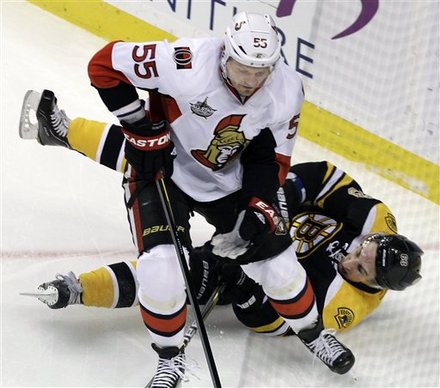 The Bruins haven't been able to win back-to-back games since January 12th. That trend was extended last night in a 1-0 loss to Ottawa that probably should have been a 2-0 or 3-0 loss. The Bruins played the first 50 minutes before generating any sustained pressure, they struggled to maintain possession of the puck, and they seemed disjointed, as if this was their first time playing with each other.

It was as if the whole team were Deadline Day new arrivals.

I know there's injuries to key players. During this stretch we're really seeing how valuable Rich Peverley is. But the turnovers, the poor passes, David Krejci trying to carry the puck around opponents like he's in a Bobby Orr highlight video, it's all inexcusable.

It doesn't just hurt the defense, either. It kills the offense. The Bruins are struggling to score goals, which means they need as many opportunities as possible. A sniper only needs one shot to kill a guy, but a bad shooter needs a dozen. The B's turning the puck over at your offensive blue-line is like a bad shooter throwing bullets away.

Hopefully it's just a product of returning home from a long homestand. Then again, this win-lose-win-lose pattern has persisted for a month and a half now.

The playoffs are around the corner. And Ottawa is only a point behind, although the Bruins have 4 games in hand. Winning the division looks like it will be extra important this year as the 2nd place Northeast team might be the 5th or 6th seed in the playoffs. There are a number of Atlantic Division teams that could occupy the 4th, 5th, and maybe even the 6th spots.

The Bruins host one of those Atlantic Division teams on Thursday as the Devils come to town.