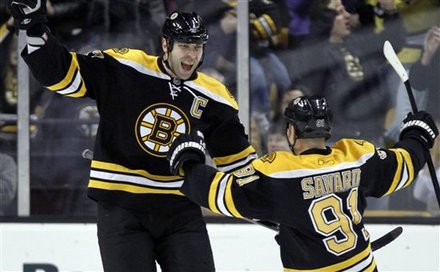 It was Hangover Day in Boston. We were all recuperating from the Patriots' loss. Thankfully, the Bruins did their part to put a smile on our faces. They even scored more in the 1st period than the Patriots scored in the 1st half.

Zdeno Chara was the star of the show, scoring three times for his first career hat-trick. He joins Glen Wesley, Raymond Bourque, and Bobby Orr among Bruins defensemen to accomplish that fete. He has 6 goals in the last 10 games, and 10 overall on the season.

What's especially remarkable is that each goal came from a different spot on the ice, which is weird for a defenseman. The first was on a breakaway, as he was essentially a forward after serving a penalty. The second came from the faceoff dot. The third came from the high slot, after he drifted in from the point. Two were power play goals, one was just after a penalty kill.

You had to love the emotion Chara showed after the 3rd goal. He's had a tremendous 13 year career, but probably never expected to record a Hat Trick. 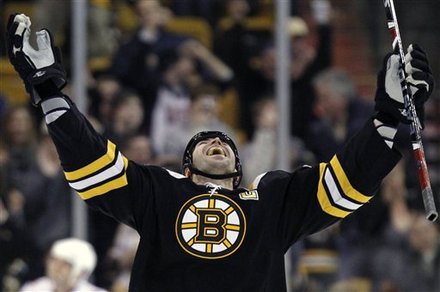 Tim Thomas had his 7th shutout. Despite the 7-0 score, it wasn't a "cheap" shutout (if such a thing exists). Thomas made some tough saves among his 31 stops. And they were timely. Before the Bruins' goals came, Thomas kept Carolina off the board, and that made the game an early laugher.

The Bruins won 3 of their 4 game homestand, and are 8-2-3 in their last 13. They have a nice, soft stretch of games ahead of them, without any elite opponents until February 9. They can amass some points here if they continue to play this well.

Bruins at Hurricanes tonight in the tail end of the home-and-home.