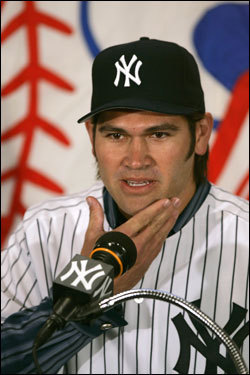 There are a great deal of fans in Red Sox Nation who feel "betrayed' by Johnny Damon. They feel like Damon has no loyalty. They feel like their girlfriend has left them for their biggest enemy. Are they right? I suppose so. Damon did say he'd never play for the Yankees. However, we've heard similar promises from Roger Clemens (he said he could never pitch against the Red Sox), and most of Red Sox Nation is clamoring for him now.

On December 20th, 2001, Damon was a hot commodity. The Oakland Athletics offered him a deal. Then the Red Sox swooped down and offered just a few million dollars more. Damon signed with the Red Sox. Now, we're shocked that he did the same thing to us? We didn't call him a traitor back then. He wanted to be where he would get more money and at the time, that was Boston. He's done this before so we shouldn't be surprised.

Yes, I know. He never won a World Series with the A's. But then again, in 2001, the A's were much better than the Red Sox. Oakland won 102 games that season, Boston won 82. Damon has always been a player that has gone where the money is. So we shouldn't be at all taken aback that he continues to do so.

In other news, the Sox got former Yankee Catcher John Flaherty. I'm glad the Red Sox are addressing such a serious need as backup catcher. Especially considering we already have Shoppach. I'm glad we're filling our needs.