Did Red Bull Get Too Cute at Shanghai? 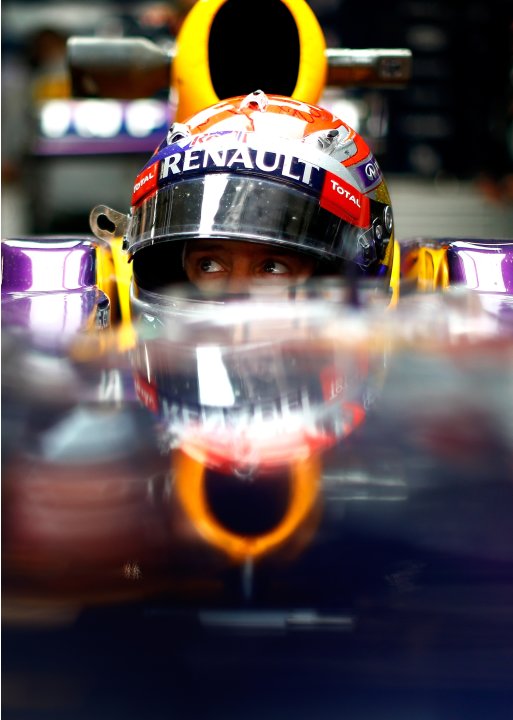 Did Red Bull concede qualifying, or were they conceited?

Red Bull were clearly pushing themselves this weekend, perhaps too far. First it was insufficient fuel in Mark Webber's car, forcing him to withdraw from Q2, and eventually be forced to start the race from the pits. Then in Q3, Red Bull didn't let Sebastian Vettel go for pole. Instead they slapped a set of medium tires on the RB9 chassis and patted themselves on the back for their brilliance.

It didn't work in the race. As pit stops cycled, Vettel occasionally found himself at the front of the field. But the race was never his to win. He was always chasing. Tasked with conserving tires and running most of his laps against opponents with fresher rubber. And I don't know why Red Bull decided to rely solely on strategy to win this race.

The RB9 chassis is at its best when it's in free air. And Sebastian Vettel is at his best when he is pushing the car to the limit. So why did Red Bull bury their car in the pack, and why did they restrain the natural (occasionally out of control) initiative of their driver?

It doesn't make sense. You've won 3 straight constructors and drivers championships. You don't need strategy to win. Especially not such a unique, all-or-nothing tactic. You can race straight up.

When Red Bull errs, it's glaring. Because it doesn't happen often. It's like when Bill Belichick makes a coaching mistake, or Tiger Woods has a triple bogey. Any issues at Red Bull become a major story. What's frightening is that even with this incorrect strategy, Vettel still managed to finish 4th, within a breath of 3rd. And I think that's a story in and of itself. An unheralded strength of this team is their ability to recover from their mistakes (See: Abu Dhabi last year). Whereas in most teams, mistakes snowball and compound.

When other teams and drivers show their humanity, like when Ferrari and Fernando Alonso took themselves out of the Malaysian Grand Prix on lap 2, it doesn't draw the same attention or criticism as when Red Bull screw up.

Alonso is the perfect storm of media darling in F1. He drives for the most storied team in racing, AND he is also the underdog. It's a perfect combination. And so Alonso's mistakes are briefly mentioned, then shelved and forgotten. The same goes for the team he drives for. And when Alonso drives his Ferrari to victory, his triumphs are emphasized.

With Vettel and Red Bull, triumph is expected. So their wins are less gushed over by the media, and their failures are stories that feed the F1 media for multiple weeks. It's what happens when you're successful.

Red Bull tried to be too clever this weekend. And a team that drove a simple strategy and relied on their driver won the race. All three teams on the podium relied on their car and their driver to do their best. It's strange that the team with double-triple World Championships didn't trust themselves enough to do the same. Red Bull need to remember why they are successful, and it isn't because of Q3 tire strategy.