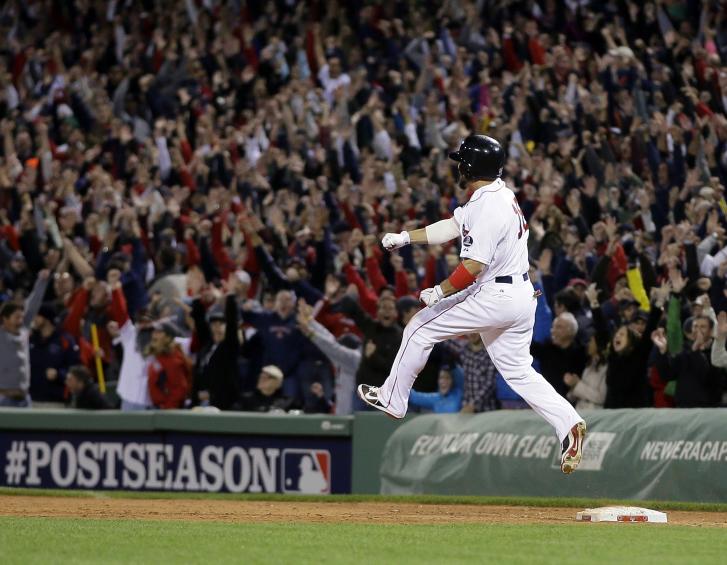 I love the smell of Grand Slams in the morning. Smells like... Victorino.

This is crazy. I'd say that I don't believe it, but with this team I can believe anything. The Red Sox are back in the World Series, a year after being a shambolic travesty.

This team finds different ways to win. They're like a Swiss Army knife, employing the necessary tools to get the job done. Clay Buchholz didn't go deep into the game, so the bullpen stepped up for him. Brandon Workman got 5 outs. Junichi Tazawa only got 1 out but it was Miguel Cabrera.

Sidebar: Tazawa totally owned Cabrera in this series. Cabrera had several big at-bats with runners on in the late innings, and Tazawa neutralized him. Tazawa deserves an honorable mention for ALCS MVP.

After Taz, Breslow pitched a scoreless 8th, and Koji Uehara threw 11 straight strikes for his third save of the series. That's what Koji Ueharas do.

Shane Victorino has not had a good series. He was 2 for 23 in the ALCS when he stepped to the plate with the bases loaded in the 7th. He was down 0-2 in the count. Then he smacked a hanging curveball into the Monster seats.

In the top of that same inning Stephen Drew, who has struggled at the plate in these playoffs, got to a Cabrera grounder up the middle and prevented Detroit from adding to their lead. He was 1 for 20 in this series, but he did his job defensively.

The maturity of Xander Bogaerts staggers me. He started the season in AA Portland, last year he was in High-A Salem, now he's in the ALCS and having quality at-bats like a veteran. I'm so happy he is the short-stop of the future and not Jose Iglesias. Iglesias had a chip on his shoulder as if he were already an established Major Leaguer. Bogaerts just plays like an established Major Leaguer. Brandon Workman remarked to Bogaerts post-game about being a "Long way from Portland." He certainly looks like he's a long way from AA.

John Farrell has managed superbly in the playoffs. He's been patient with guys like Victorino, and that's paid off. He's been willing to acknowledge his mistakes and adjust his tactics. He's been selectively aggressive. And you can tell from the general attitude of the team that he instills confidence in his players. If the Sox are a Swiss Army knife, he is the one who decides which tools to utilize in different situations.

This team makes you proud. The way they fight and claw for every base and every out. The way they're able to win in different ways. The way they don't quit. A year ago we were ashamed of our baseball team in Boston. Now we beam with pride when thinking about them.

Game 1 of the World Series is Wednesday night in Boston.