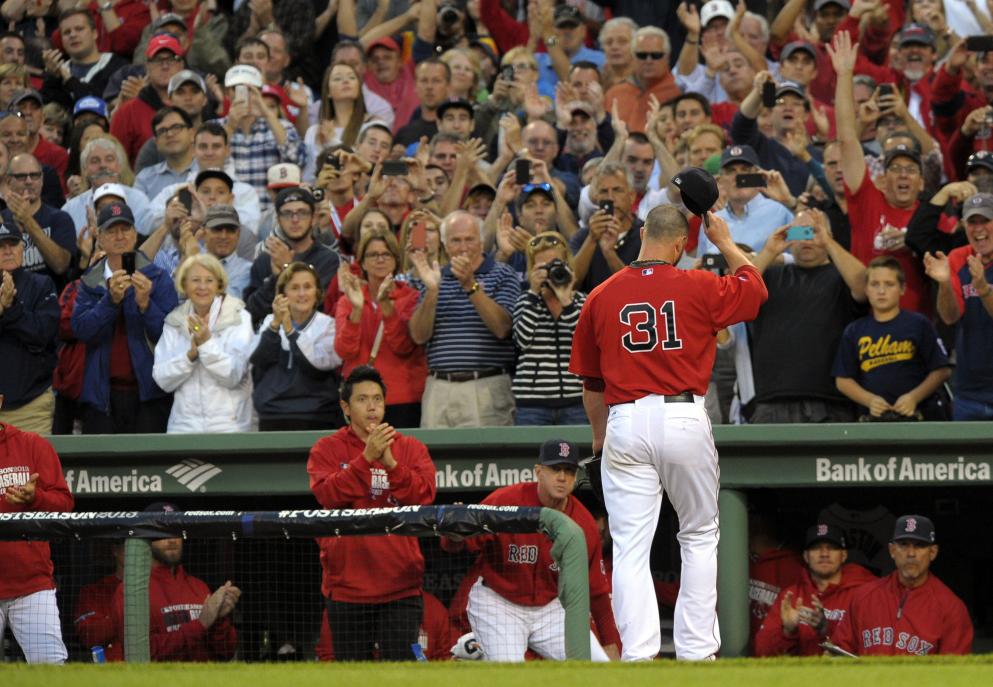 It's been 4 years since Boston hosted playoff baseball. It's been 5 years since we've seen our team win a playoff game. That drought came to an end Friday afternoon thanks to a flood of Red Sox runs, and an outstanding performance by Jon Lester.

The play of the game was a miscue by Rays right-fielder Wil Myers. Pitcher Matt Moore was cruising until the 4th inning when David Ortiz hit a long fly to deep right-field. As Myers tracked the ball, he waved off the center-fielder. Myers suddenly stopped and ran away from where the ball was going to land, as if he'd heard center-fielder Desmond Jennings call him off. The ball landed, bouncing into the Red Sox bullpen for a ground-rule double.

I have a strong suspicion that some of the Sox relievers in the bullpen yelled at Myers, "calling" for the fly-ball, making the 22-year old rookie think that his teammate was right behind him, waiting to make the catch. Center-fielders typically have the authority to wave off other outfielders when trying to catch fly-balls.

So instead of 1 on and 1 out, the Sox had runners on 2nd and 3rd with 0 outs. A 5-run rally ensued. Jonny Gomes hit a wall-ball double, Stephen Drew ran out an infield single that saw Gomes hustle to score from second. Will Middlebrooks hit a double, knocking in Drew. Then Shane Victorino singled to drive Middlebrooks in.

Myers received quite a bit of heckling from the Fenway crowd after the play, which was scored a double and not an error. However, Tampa Bay pitcher Matt Moore should be forced to eat a few slices of the proverbial blame pie. After the miscue, Moore allowed two more doubles in the inning, four hits total, he failed to cover first base in time on Drew's single, then didn't notice Gomes running home in time to throw him out. And in the next inning Moore allowed more doubles, more runs, and was eventually pulled.

So blame Myers for the rally starting, and blame Moore for the size of the rally.

Every Sox starter got a hit in the game and scored a run. The only two who didn't record an RBI were Pedroia and Ortiz.

Meanwhile, Jon Lester dominated the Rays with the exception of 2 pitches. He allowed a pair of homeruns, although crucially they were solo homeruns. He only allowed 6 baserunners in his 7.2 innings, and he struck out 7, including the first 4 Rays he faced. He established his dominance in the 1st by striking out the side, and he shut down the Rays in the top of the 5th after his teammates gave him a lead. Lester pitched like an Ace in his first postseason game since 2009.

John Lackey faces David Price Saturday evening at 5:37 P.M.. Lackey pitches better at Fenway which is why he gets the ball for Game 2 and not Clay Buchholz.