SAVARD TO PLAY IN ROUND 2

The hits just keep on coming. Marc Savard has been cleared by the medical people and Peter Chiarelli has announced that he will play in the Conference Semifinals against either Philadelphia, or the team that harbors the man who injured him: Pittsburgh.

Even though a Bruin/Flyer matchup might offer the Bruins a better chance of advancement to the Conference Finals, you can't resist the theater that a Penguins/Bruins series would offer now.

Claude Julien might have trouble finding ice time for Savard, as Bergeron and Krejci were 1 and 2 among Bruins forwards in time on ice. Shawn Thornton might be the forward to get scratched. Then again, it might be Daniel Paille or Michael Ryder, considering their lackluster performances.

One thing's certain, Savard will be on the ice for the power play. And that unit actually exploded as Krejci quarterbacked it. to better than 26% against Buffalo.

The bad news on the injury front is that Mark Stuart will likely miss the entire 2nd round. The Bruins could use 15 minutes from him as Andrew Ference (why the hell did the B's give him a contract extension) struggled.

Two series ended, one was forced to Game 7.

David Krejci scored twice, Satan and Recchi had the other two for Boston. The Sabres valiantly stayed in it, thanks to some Bruins' turnovers, but as well as they could respond, they failed to initiate. Tuukka Rask came up with some huge saves, and the Bruins advance to the Conference Semis. The B's killed every single penalty they committed.

Jaroslav Halak made 53 saves on 54 shots, and Mike Cammalleri scored twice in the 1st period. Washington's really shit the bed in this series, and they're in very serious danger of a 1st round exit, San Jose style. 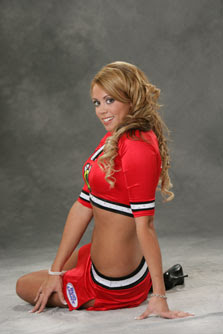 It was harder than I thought it would be (That's what she said), but the Blackhawks prevailed. Almost all the scoring was in the 1st, as the Blackhawks ended the opening period up 4-3. Marian "Not Suspended" Hossa had 3 assists.

As important as simply amassing Wins are right now, it's hardly heartening to win 13-12 when your supposed "Ace" is on the mound. Josh Beckett went 3 innings, allowing 8 runs off 9 hits and 3 walks. In 5 starts this season, Beckett has made only 2 Quality Starts, and his ERA sits at a lofty 7.22.

Beckett struggles in April, so it's not time to panic. Not yet. But May is very very close, folks.

Thankfully, Delcarmen, Papelbon, and Bard combined for 4 perfect innings of relief. Unfortunately, that came along with 4 earned runs in 2 combined innings from Atchison, Schoeneweis, and Okajima. But in the end, Toronto's bullpen was slightly worse.

Photo Credit:
Canadian Press
Posted by rob at 11:00 AM No comments:

"Advancement." Such a simple word for such a glorious achievement. The Bruins haven't advanced in the playoffs in consecutive seasons since 1992.

And we can thank a few principles for this feat: Tuukka Rask, David Krejci, Mark Recchi, Patrice Bergeron, Dennis Wideman, and Zdeno Chara most of all.

"Here we go Bruins, here we go. TUU-KKA!" That's the anthem, get your damn hands up. And it's been well earned. Tuukka made several huge and timely stops in this game. Two minutes before Krejci's first goal, Rask made a crotch-save, and alertly smothered the puck with his glove. When the game was 2-1 in the 2nd, Rask made an excellent ankle save as the game shifted violently from end to end. Then late in the 2nd, he stopped Vanek at point blank range. Early in the 3rd, after a Hunwick giveaway, Rask made the stop, firmly holding the post. Rask came through several times in the 3rd.

Then there was Krejci. At the end of the regular season, he came into his own once again, showing sparks of 08-09. His first goal was something I've seen in college hockey quite a bit this season, particularly from the BC Eagles. Krejci was in the high slot, above the compressed defenders near the crease. Recchi perfectly executed a shot-pass, which is something that is essentially a shot away from the net, but toward that player in the high slot. Krejci whiffled it into the net. It was the first time the Bruins took the initial lead in the series.

In the 3rd, Krejci's goal came from Lucic's triumph over two Sabres behind the net. Lucic found Krejci in the crease, and it was an easy goal from that range.

I already mentioned Recchi, but his goal came from a Dennis Wideman decision. On a 4-on-3 power play, Wideman crashed the net, which disturbed Buffalo's triangle defense. This gave Bergeron a clear passing lane to find Recchi, who shot at a near 90 degree angle past the committed Ryan Miller.

Satan's goal turned out to be the game-winner. He was spotted by Wideman, who snuck a pass through traffic, found Satan, and the scorer dangled, deked, and toyed with his ex-teammate Miller.

Now, all three of Buffalo's goals were extremely preventable. The first came after a Wideman giveaway, as he attempted a fadeaway breakout pass into the center of the ice. Ryder Three Stooged the puck, giving it away to the dangerous Nathan Gerbe. This resulted in a goal right after Krejci's 2nd made it 3-1.

Even though Wideman's giveaway resulted in a goal, at least he had a great game otherwise. The same cannot be said for Michael "The Saboteur" Ryder. I praised Ryder after his Game 2 performance. But he's back to being a premature ejaculating (figuratively speaking) fucko. He was hesitant and tentative with the puck in all three zones last night.

Special teams achieve new emphasis in the postseason. The Bruins, who struggled on the power play all year, were 6 of 22 (27.3%) in this series. Meanwhile, the B's killed all 19 of Buffalo's power plays. That's sheer dominance in the special teams category.

Now there's much work to be done by the Bruins. They made plenty of mistakes in this series. Mistakes that were rescued by Rask's goaltending, and saved by Buffalo's offensive ineptitude (especially without Vanek for most of the series).

But let's enjoy this upset victory. This is a 6 seed upsetting a 3. The Bruins were the only team to win a road game in this series. And they'll face a foe from Pennsylvania in the next round, dependent on the outcome of the Montreal/Washington series.