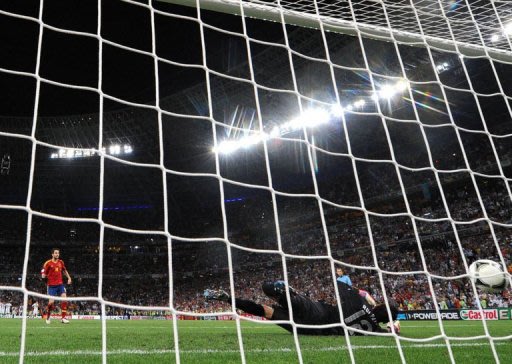 I hope no potential soccer fans were watching this game. The blandness of it may have permanently pushed them away from a sport that's typically much more entertaining to watch at this high level of play.

Spain have now gone 11 straight games in major tournaments without losing (10 wins, 1 draw). But their margins have been tight. Six of those 10 wins had 1 goal margins. And now they have a win with a 0 goal margin.

Portugal's offense is Cristiano Ronaldo. That's the biggest and essentially threat they have. He had a few chances, and he's been good in this tournament, but he couldn't finish in regulation. Then in a perplexing move, he didn't take a penalty kick. He was slated to kick 5th for Portugal, who were kicking after Spain in each round, but the Spanish clinched victory before he had a chance to take his PK. It was a truly baffling decision.

Spain don't mesmerize like Brazil, or score goals in bunches like Germany. They grind teams down. They don't make mistakes, they possess the ball well, they have a great keeper, and they have a number of guys who can take advantage of mistakes and score opportunistic goals.

David Ortiz and the 400 Homerun Club

David Ortiz is on the verge of history. He's 1 homerun shy of 400. He'll be the 49th player to reach that mark. And while that's intriguing and exciting, it's just not as impressive as it used to be. None of these homerun milestones are.

The term "milestone" is appropriate though. Consider 400 miles. To people in the 21st century that's not too far a distance to travel. It's a 6 hour drive. A flight from New York to Cleveland (about 400 miles) takes 1 hour and 45 minutes. 400 miles is not a long distance.

100 years ago, a 400 mile journey was immensely long. A 10 hour train trip. And on a flat road, it would be slightly shorter (but also slowed by countless fuel and repair stops) driving a Model T.

And 300 years ago, 400 miles was an unbelievably long distance. A horse journey would take over 4 days.

The point is, the milestone stays the same, the perception of it changes.

I remember growing up and there were 3 people in the 600 homerun club. Aaron, Ruth, and Mays. Now there are 8, including Jim Thome. Is Jim Thome one of the best sluggers of all time? No.

The 500 homerun club is equally devalued. Rafael Palmeiro has 569. Manny Ramirez has 555. Gary Sheffield has 509. It's not just the steroid-assisted guys either. Frank Thomas has 521, the same as Ted Williams and Willie McCovey. Williams' and McCovey's numbers are easy to remember, Thomas' will be easy to forget.

So if these feats don't mean anything anymore, what does 400 homeruns mean? Not much on its own. And even less if the player has a history with PEDs as Ortiz does.

Carlos Delgado has 473. Jose Canseco has 462. Chipper Jones has 460. Chipper Jones! Abert Pujols has 457 and steadily climbing. Vladimir Guerrero and Jeff Bagwell have 449. Jason Giambi has 429. Andruw Jones and Mike Piazza have 427.

Miguel Cabrera is 108 away. But at 29 years old, he has plenty of time to get there. He could easily get there by 2015. Ryan Howard, if he can stay healthy, should get the 114 he needs to join. Prince Fielder needs 158, but he can get that in 4 or 5 years. Matt Holliday has a decent shot at it too. If Adrian Gonzalez remembers how to hit homeruns, he can hit the 199 he needs.

But considering the caliber of players that have done it, 400 homeruns is a significantly less impressive part of a player's resume than it once was. It's not that meaningful anymore. And considering some of the things Ortiz has used that aided some of those homeruns, it's even less impressive.

I'm watching for it. I'm eagerly waiting. But I'm not amazed.
Posted by rob at 10:00 AM No comments: