Roger Clemens Was Not "Proven Innocent"

The U.S. Judicial System does not determine innocence. It determines guilt, or insufficient proof of guilt. That's why when people are acquitted, they're declared "not guilty" instead of "innocent." The court is essentially saying that it hasn't found you guilty, so you're free to go.

It does NOT declare people to be innocent, at least not until you get into the Appeals process.

Proving innocence is difficult because it's nearly impossible to prove a negative. Think how hard it would be to prove that you've never done something.

I've never eaten rhubarb. But proving that is difficult because it's a negative statement. I'd have to get witnesses from every meal I've ever consumed to say they've never seen me eat it, samples of my bowel movements to show it's never been in my system, and then I'd have to prove somehow that I never snacked on it by myself.

So when people say that Roger Clemens has been "proven innocent," then back that argument up by pointing out how high an authority the U.S. Judicial System is, I get a little pissed. Because it's the wrong word.

The court did not declare Clemens innocent. Being deemed "not guilty" is not proof of innocence. The prosecution failed to prove him guilty beyond a reasonable doubt. There is a difference.

I think Clemens took PEDs. Jose Canseco says Clemens demonstrated an intricate knowledge of PEDs. Brian McNamee said he gave PEDs to Clemens. And Andy Pettitte testified that Clemens admitted to him that he took HGH.

Pettitte retracted his statements, but I don't think it's mere coincidence that he did so once the heat was off him. Andy Pettitte has repeatedly lied about his own HGH use, at first claiming only 2-4 doses and only during 2002, then later admitted to doing some in 2004.

When Pettitte was under pressure, he named Clemens. When the pressure eased off and Pettitte was no longer afraid of consequences, he recanted his Clemens story.

Maybe Pettitte, under pressure to save his own skin, was compelled to name names, even if those people were innocent. But then why name one of his best friends?

In the end, it doesn't matter much. There is no absolute proof that Clemens' career was artificially extended by PEDs. That lack of proof was why he was acquitted.

But I know what my gut tells me. I see more than just smoke. I see scorched earth, burnt wood, an ashy haze, and a number of people saying "there was a fire here."

Clemens might get into the Hall of Fame. And I don't care. The Hall of Fame is already full of scumbags. Ty Cobb was a racist who probably killed a guy. Charles Comiskey was a cheap, money-grubbing bastard. Joe DiMaggio was a jerk. Babe Ruth was a glutton, an alcoholic, and a horrible father. What damage could be done by including Clemens?

I don't know why we get so emotional about who is in the baseball Hall of Fame and who isn't. Maybe it's because when we're kids, we learn about the great players. And the words "Hall of Famer" are the athletic equivalent of "Saint."

So put Clemens in the Hall. Give him a brass face on a plaque with some numbers and words on it. I know those final 4 Cy Youngs are meaningless. I know his final 150 wins were thanks to HGH. I know he's scum, he's a sociopath, he's not the best pitcher of his generation or any other generation. He's artificial.

But if you're going to put him in, don't say it's because he's been "proven innocent." I heard Peter Gammons say that on NESN yesterday and it's a complete misunderstanding of how our system works.

Roger Clemens hasn't been proven to be anything. So maybe voters should give him the benefit of the doubt and vote him in. As I said, I don't care.

And as much as these clowns repeat the wrong word, I for one know that he isn't innocent. I see no proof of innocence. Only a haze of guilt. You can't convict someone on a haze, but there is no way he's been "proven innocent."
Posted by rob at 12:30 PM No comments:

So LeBron James cramped up last night, and suddenly his performance is being equated to Michael Jordan's Flu Game in the '97 NBA Finals.

LeBron was carried off the court as if he'd been shot. Because he had a left thigh cramp. And so started the Hero Narrative. This was how Adrian Wojnarowski started his piece about LeBron hitting an actual shot despite his debilitating injury:

"LeBron James told himself: Get up and walk to the sideline. All around him, there were trainers and teammates to lift him up, but his muscles burned, his legs locked and his desperation to defy the pain was met with the body's resistance. He had been standing on his own in the biggest moments of these NBA Finals, rising above everyone else, and his inclination was natural in the closing minutes of Game 4: All these times he had gone down, all this pain and angst and LeBron James had wanted to get back to his feet and keep hurtling toward his championship destiny."

Wow. Do you have goosebumps? Because I do.

There was a great story this morning about hockey players mocking LeBron James on Twitter. My favorite were a pair of tweets by AHLer Scott Valentine:

"Oh my god guys, Lebron has a cramp, everyone get on their feet, standing O for somehow staying in the game."

"If Lebron somehow manages to pull off winning a ring after fighting through a thigh cramp.. it will be a story I tell my children’s children."

In all seriousness, cramps hurt, and LeBron is doing well in the Finals. But some people, like the above quoted Wojnarowski and the folks at ESPN are turning LeBron into something more heroic than he is.

It's just another Narrative of Hype from ESPN. ESPN no longer reports sports news, it exaggerates it.

To me, the story of the 2012 NBA Finals is that someone with talent is finally playing up to their potential. There's nothing gutsy or heroic or special or tough about LeBron's performance last night. He was in pain, but not nearly as much as he was showing. He was playing into it, wincing for the cameras. All basketball players do that. They're just below soccer players when it comes to embellishing pain. 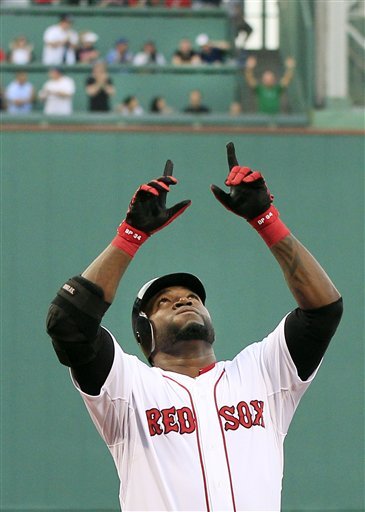 The Sox started their 9 game homestand with a 7-5 win over the Marlins. It was exactly how they needed to start this stretch of 16 games against mediocre teams.

Buchholz wasn't great, but he worked through some mistakes. He allowed 9 hits in 6 innings, and walked 1. The Marlins scored 5 times off him. A 2 run homer in the 1st and a 2 run double in the 5th were the big hits he allowed. It wasn't a pretty start, but it was enough.

The offense gave Buchholz plenty of support. David Ortiz hit a 2 run homer in the 1st, Kelly Shoppach hit a 2 run shot in the 2nd. Cody Ross returned to the lineup and hit a solo homer.

Adrian Gonzalez hit a sac-fly in the 6th to give the Sox a 6-5 lead. While that's not technically a clutch hit, it was a clutch out. Middlebrooks added an RBI double in the 6th.

The bullpen did a great job to hang on to the win for Buchholz. Albers, Miller, and Aceves were all perfect. Padilla allowed a basehit in his inning of work.

It was a solid win. This season we've seen the various parts of the Red Sox undermine the good performances of their teammates. The lineup might get 2 hits and waste a good start. Or the bullpen might blow a 2 run lead. But last night the starter struggled and was picked up by his teammates. The offense scored for Buchholz, and the bullpen finished the game for him.

By the way, how lucky has Buchholz been this season? He's pitched well lately but his 8-2 record is based mostly on run support.

After the "toxicity" talk, it was good for the Sox to just win. Winning and clubhouse chemistry are vicious cycles of each other. Chemistry can cause winning, and winning causes chemistry.

Unfortunately, Dustin Pedroia left the game after an at-bat in the 7th. He apparently re-aggravated his right thumb injury. He hasn't been hitting well since returning to the lineup, although he was 1 for 3 last night with a double. The Sox say that today they'll know much more about how severe the re-aggravation is.

The Sox need to build on this tonight. Doubront faces Ricky Nolasco. Doubront was great against the Marlins last week. And the Sox were able to score off Nolasco. Hopefully that repeats tonight.

Photo Credit:
AP Photo
Posted by rob at 10:30 AM No comments: